The C language is a very vast language when it comes to the use of different technologies or APIs. It is also very usable when we want to use the socket programming. Just like this, it comes up with the epoll 7 functions. Poll(2) and the epoll API both observe the various document descriptors to determine whether I/O is feasible on every one of them. The epoll API extends very well with the great numbers of monitored document descriptors and may be used as being either a level-prompted or edge-prompted gateway.

The epoll entity, an in-kernel information model that may be seen from the user-space as a wrapper for two sets, serves as the foundational idea of the epoll API. Within this guide, we’ll discuss the use of the epoll function in the C language.

The following system functions are available to build and administer an epoll object:

Edge-Triggered (ET) and Level-Triggered (LT) behaviors are both possible for the epoll incident circulation interface (LT). The two methods’ differences can be summarized as follows. Suppose the following transpires:

The request to epoll_wait(2) made in step 5 will likely stall if the RFD document handle has been assigned to the epoll protocol with the EPOLLET (edge-triggered) signal. In the meantime, the remote partner could be anticipating a reaction depending on the content it already supplied. This is because the edge-triggered option only sends signals whenever the observed document descriptor undergoes modifications.

Therefore, the caller function may even have to be put on hold for a certain information which is already in the buffer cache in phase 5. In the aforementioned example, the write in 2 may trigger an activity to be created on the RFD, and the incident will be received in 3. The call to epoll_wait(2) in step 5 may become stuck because the read activity in step 4 did not use all of the buffer information.

To prevent a stalling read or write from depleting a job that is managing the various file descriptors, a program that uses the EPOLLET option should be using the non-blocking document descriptors. The following is a recommended procedure for using the epoll as an edge-triggered (EPOLLET) interface:

Epoll, on the other hand, is just a quicker version of poll(2) and may be used everywhere poll(2) is used since it has the identical logic whenever it is seen as a level-triggered protocol (the standard whenever EPOLLET is not given). The caller function has the choice to supply the EPOLLONESHOT signal to instruct the epoll to shut the linked file descriptor when receiving an occurrence with epoll_wait. Meanwhile, even with edge-triggered epoll, many actions can be created upon reception of the several sets of information (2). The caller really must redeploy the document descriptor with the epoll_ctl(2) and EPOLL_CTL_MOD whenever the EPOLLONESHOT flag is given.

Although the logic of epoll when used as a threshold API is identical to those of poll(2), the edge-triggered behavior use calls for greater explanation to prevent the delays in the program event queue. The listener in this illustration is a non-blocking socket upon which the listen(2) function is invoked. Before EAGAIN is given either by read(2) or write() function, the method use the fd() function to maintain the new ready file descriptor (2). An event-driven state machine app might as well save its present state after receiving EAGAIN so that it could resume reading or writing at the previous point when fd() is called again. Check out the affixed code here:

In order to improve efficiency, the file descriptor may only be added once within the epoll interface (EPOLL CTL ADD) by designating (EPOLLIN|EPOLLOUT) as an edge-triggered interface. By running the epoll ctl (2) with EPOLL CTL MOD, you may avoid the constant shifting among EPOLLIN and EPOLLOUT. The remaining code for this illustration is appended in the following image: 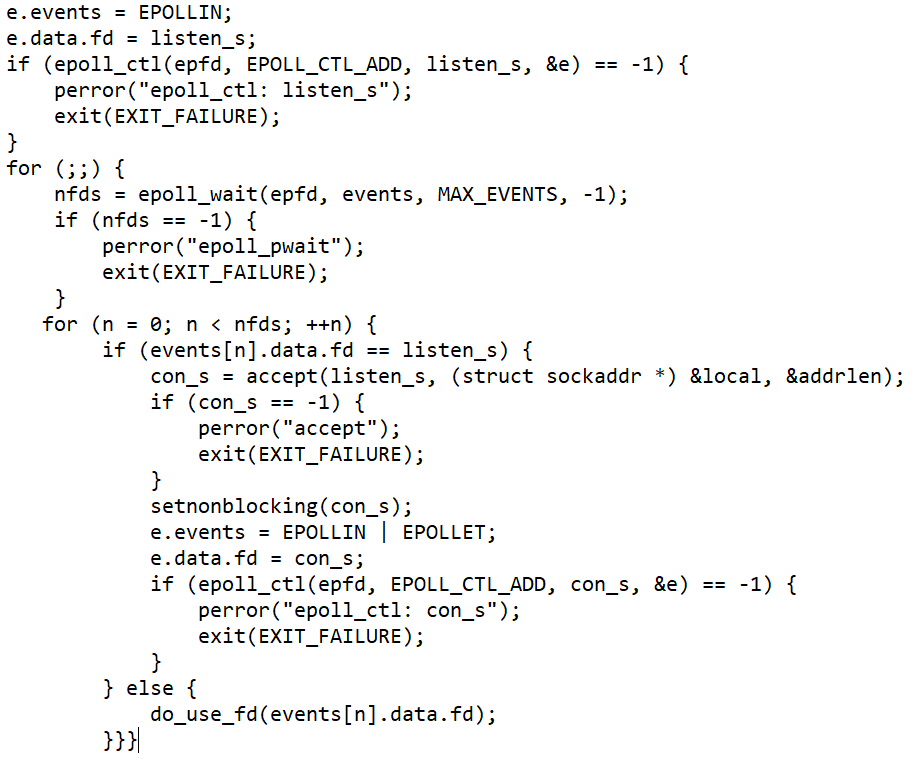 This is about the use of the epoll 7 C function in the Ubuntu 20.04 Linux operating system to perform the socket programming. We discussed how an epoll() 7 C function can be used to check the feasibility of the various file descriptors to determine whether the input and output they contain are viable or not, both from the server and client side.