Text editors have seen a rise in popularity over the last several years due to major shifts in the world of technology. The lightweight and immaculate performance of text editors has led developers to favor these tools over other, similar tools, such as IDEs. Because text editors are widely used in programming, it is important to choose an editor that allows one to perform to the best of their ability.

Emacs is one such example of a text editor that is known for its versatility and flexibility. Emacs has a simple-looking and user-friendly interface, coupled with excellent speed and performance, making it a popular tool among the development community. Emacs also comes with detailed documentation, along with some excellent guides and tutorials, to aid users with the program.

The powerful features of Emacs, including version control integration, multiple editing modes, and text manipulation tools, have also played a part in the popularity of this text editor. One such feature that Emacs excels at is the Copy and Paste feature. This article will cover how to use Emacs to copy and paste data.

Emacs and the Clipboard

Copying text, on the other hand, is referred to as saving onto the kill-ring. This is because in Emacs, when you cut or copy text, it is sent directly to the top of the kill-ring. The kill-ring is basically a list containing the previously killed (cut) blocks of text.

To copy or kill text in Emacs, you must first select the text. This is done by using the selection command Ctrl + Space.

If you would only like to copy the selected region, this can be done by hitting Alt + w.

To cut, or kill, the text, you can use the keys Ctrl + k to kill a particular line, or the Ctrl + w command to kill the entire selected region.

To paste, or yank, the text, press the keys Ctrl + y. This pastes the last killed item from the kill ring. Emacs also allows you to cycle through the kill-ring list using the command Alt + y.

Summary of the commands: 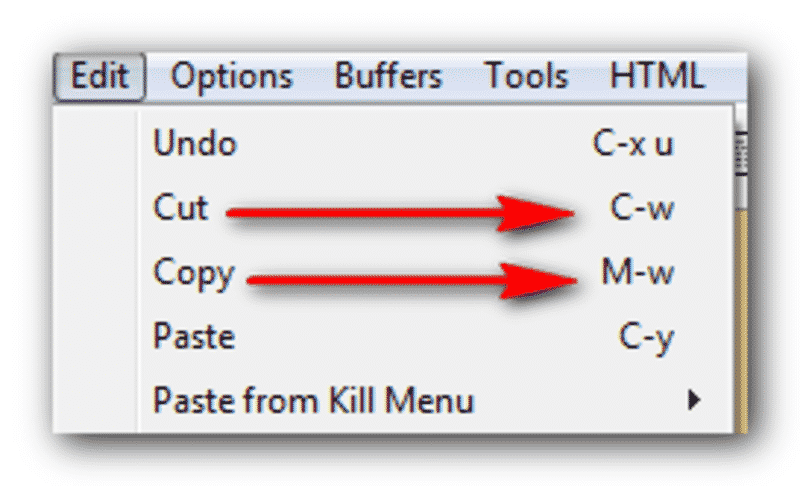 How Good Are the Text Manipulation Features of Emacs?

Emacs possesses a highly powerful core at the back-end, giving this text editor both versatility and extensibility. This has in turn allowed users to enjoy a large set of tools for text manipulation, which helps developers do their work more quickly and efficiently. Allowing users to access not only the last killed item, but also all previously killed items, shows some of the power possessed by this simple-looking tool.