Emacs is a highly versatile and flexible text editor that offers a lot of powerful extensions and packages to its users. It is often considered to have a very steep learning curve, and with having so many things installed, it becomes hard to keep track of them all.

Hence, we have created this Emacs cheatsheet to help smoothen your experience.

To make commands easier to understand, Emacs has a few abbreviations that need to be clarified before moving onto looking at some of its necessary commands.

The following specifies what each terminology means in terms of key bindings:

Emacs has a pretty detailed and straightforward help system. For first time users, it offers a built-in tutorial that can be accessed by using Ctrl + h followed by t keys.

By hitting Ctrl + h followed by r, users can get access to the extremely detailed manual of Emacs. 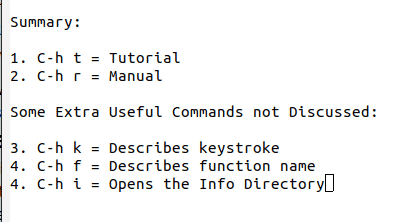 To replace this currently opened file with another, hit the keys Ctrl + x followed by Ctrl + v and enter the filename of the new file.

The shortcut Ctrl + x, followed by i, can also be used to insert the contents of another file into your current file.

To check the number of files or buffers opened, hit Ctrl + x, followed by Ctrl + b.

To switch from one file to another, hit Ctrl + x, followed by b.

To close files, hit Ctrl + x, followed by k. If no file is specified, then the default file is closed. 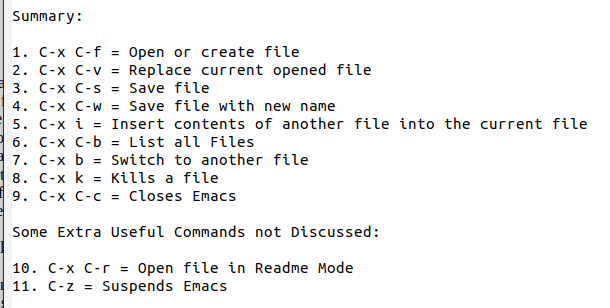 Similar to Vim, Emacs offers shortcuts for cursor movements as an alternative to using the mouse. The following table describes these in detail

To display line numbers in your Emacs, hit Alt + x and enter linum-mode. Now using this, you can go to a specific line number by hitting Alt + g followed by g and then entering the line number. For example: 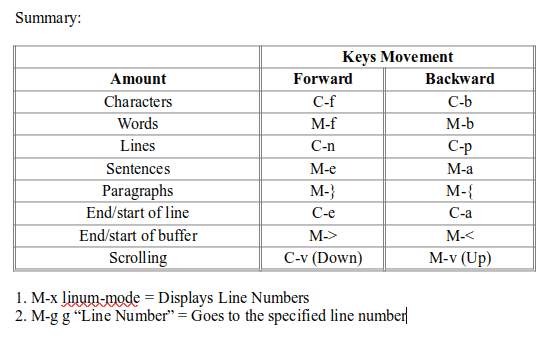 
Emacs is quite a popular text editor, and that is mainly due to the amazing editing tools it provides to its users. One of these is the ability to repeat a command by the length specified. To do this, hit Ctrl + u followed by entering the length of repeating and then entering the command to be repeated. For example, if I want to scroll three pages down, then this would be:

Before being able to apply commands like copy and cut, we first have to select the region on which these commands will be applied. This is done by Ctrl + Space. To mark the whole region that you want to select, drag the cursor to the end-point. For example, in the image below, the rectangle specifies the beginning of the selection and the circle its end.

To select the contents of the whole file, hit the keys Ctrl + x followed by h.

Text can be pasted by using the shortcut Ctrl + y. You can cycle around the killed items by using the key Alt + y.

Using Alt + y to replace this with old killed item: 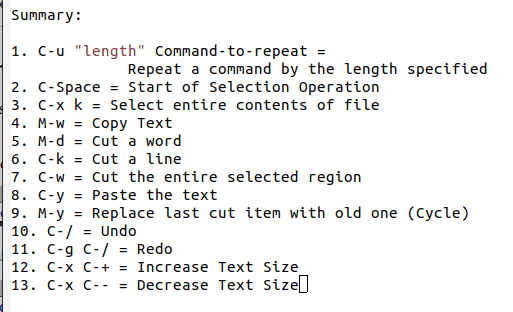 To perform a simple incremental search, use the keys Ctrl + s. Jump from one result to another by continuously pressing this key.

To perform this incremental search in reverse, use the keys Ctrl + r.

To perform a simple query, replace, use the keys Alt + Shift + 5.

Asking for the word to be replaced:

Asking for the word to replace with:

Emacs has some great commands that offer aid in recovering or restoring the contents of a file. To abort commands that are either running or have been partially typed, click Ctrl + g.

To recover a file whose data might have been lost, use the keys Alt + x to open the mini-buffer and then enter recover-file.

To recover the entire session, then hit Alt + x and enter recover-session.

To revert a changed file to its original form, hit Alt + x and enter revert-buffer.


The powerful nature of Emacs is seen from the fact that it makes integration with multiple external tools possible. This is one of the reasons why it is considered to be more than a text editor.

To open the shell inside Emacs, hit Alt + x and enter the shell.

Emacs also has the GDB debugger built-in, which can be opened by hitting Alt + x and entering gdb. 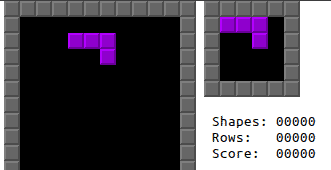 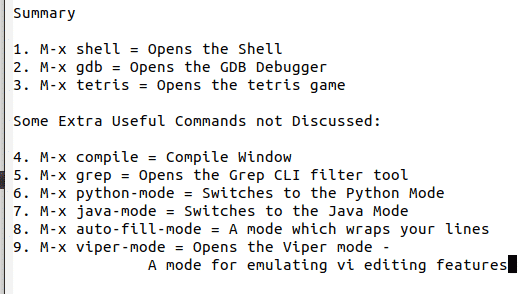 To keep track of all the commands in Emacs, a cheat sheet becomes quite necessary to have since Emacs has lots of tools inside of it, and accessing them through the menu is quite the hassle.