Privacy and security have become an important concern these days. Encryption plays an important role in securing and protecting your confidential data. In Linux, there are many tools that can be used to encrypt the data. In this article, we will talk about one of such tools eCryptfs that allows encrypting partitions and directories in a Linux system. This article explains the following;

Note that we have explained the procedure on Ubuntu 18.04 LTS system.

The general syntax for using eCryptfs is:

eCryptfs is already included in the official Ubuntu repositories, so we can install it using the apt command. Open the Terminal in your Ubuntu system by pressing Ctrl+Alt+T. Now in the Terminal, execute this command to install eCryptfs:

Wait for a while until the installation of eCryptfs is completed.

To encrypt a directory using eCryptfs, use the syntax described above and replacing the and [Destintaion directory] with your own source or directory name.

For instance, I want to encrypt the “Myfiles” directory under my Home directory. In this case, the command would be:

When you run the above command, you will be asked to provide some details along with passphrase. The passphrase is actually the encryption key that will be used to later to decrypt the encrypted directory.

Also, note that the details you provide will be later used when remounting the directory. 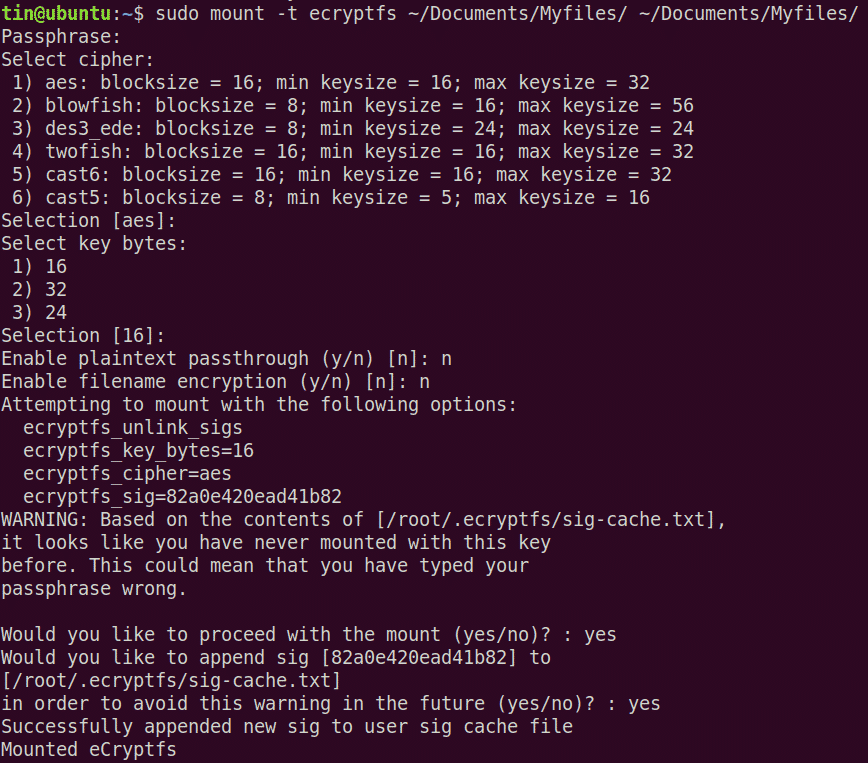 Now our directory is encrypted and mounted. You can verify it by running the following command:

You will see output similar to this.

Let’s create a document in the mounted directory using the Nano editor.

Now add some text in the file and press Ctrl+O and Ctrl+X to save and exit the file respectively. Now try to view this document using the cat command:

Now let’s try unmounting the directory. Use the following syntax to do so:

In our case, it would be:

Note: to unmount a directory, the command is “umount” instead of “unmount”.

As the directory is unmounted, so now let’s view the document using the cat command. This time, you will not be able to view the original content. Instead, you will see the encrypted text.

To access your files again, you will need to re-mount them and enter the same passphrase and details you have set earlier while mounting for the first time.

From the above output, you can see my device name is “/dev/sdd1”.
Create a mount point using the following command:

Now mount the USB drive at this mount point:

Run this command and copy the signature from the output:

Next, create a signature file using this command:

Then insert the signature you copied above in previous step.

Once done,  save and exit the file.
Next, we will create a passphrase file in the USB drive. To do so, run the following command in Terminal:

Add the following line by replacing the “your_passphrase” with the actual passphrase: 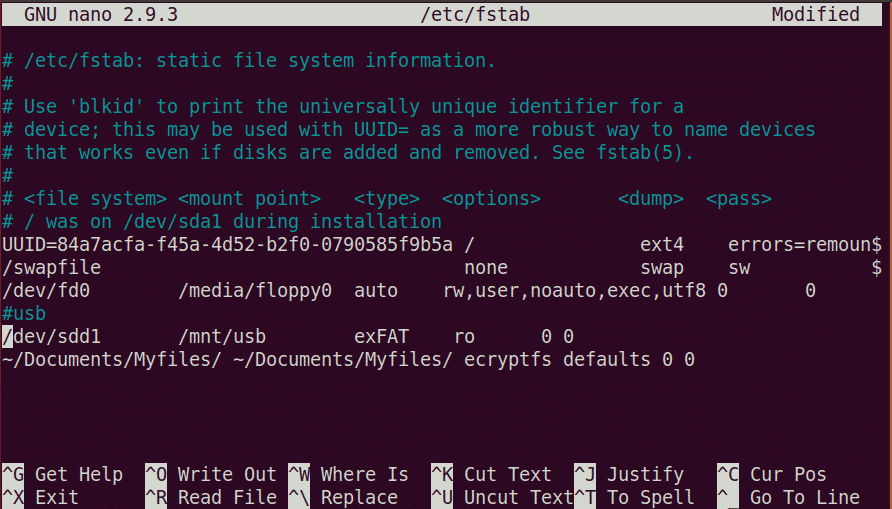 Once done, save and exit the file. Then reboot the system and the ~/Documents/Myfiles should be mounted.