In PostgreSQL, you have created a table with various columns in it, and now you need to delete or drop that column from your table in the database. The column can be dropped or deleted by using the DROP COLUMN command in the ALTER TABLE statement. The DROP COLUMN clause can drop a column or more than one column from a table. This is the command that is very frequently used for database operations where the data stored is huge. For using the DROP COLUMN command in ALTER TABLE statement, first, make sure that the PostgreSQL is successfully installed on your system, and you can run queries on the server with other commands as well. In this article, you will be learning how you can remove single or multiple columns from a table in PostgreSQL with detailed explanations and different examples for your better understanding.

The basic syntax will explain how you can drop a column from a table using DROP COLUMN in the ALTER TABLE statement:

The above syntax of DROP COLUMN is explained as:

You have run the above syntax, and PostgreSQL displays an error that the column doesn’t exist in the database, then you can run the following command to avoid the error:

The IF EXISTS option will remove or drop only the column that exists in the data, but if it doesn’t exist, PostgreSQL will display a notice rather than an error.

The CASCADE option removes the columns, including the ones that are dependent on other database objects as well.

You will need to use commas after each column name to drop or remove more than one column from the table in PostgreSQL.

Examples to DROP COLUMN in PostgreSQL: 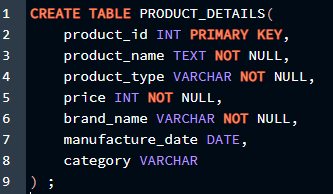 This query shows the following output:

The above output ensures that the table we created above with their respective columns is done.

Now, we can drop or remove the columns in this table with different examples.

Drop Single Column from the Table in PostgreSQL:

If we want to drop one column from the table “product_details” run the following query:

The above syntax will drop the column “price” from the table “product_details” using the DROP COLUMN command in the ALTER TABLE statement, and in results will display ALTER TABLE. To verify that the table is dropped from the table, we will run this query to view the table with all columns:

This will show all the columns that exist in the table “product_details” as:

It can be seen clearly that the column “price” is now dropped from the table “product_details” and is not displayed in the table.

We know that the “price” column doesn’t exist in the table name “product_details” anymore then we can use again run the query to check if PostgreSQL shows the error message or not:

It shows the following error:

Now, if we use the IF EXISTS option in the above statement, it will show a notice instead of an error like above:

Drop Multiple Columns from the Table in PostgreSQL:

For dropping multiple columns, I have used more than one DROP COLUMN clause to remove two columns from the table, which are “brand_name” and “category”. To check that the column is dropped, use the SELECT statement to display the table.

Only four columns are left in the table that can be seen in the above table.