The loops are quite well-known in most programming languages to iterate the data or increment or decrement the values in the code. The loops can be used alone or in nested forms. One of the most famous loops used in programming is the “While” loop. This loop continues to get executed until the mentioned condition is satisfying. Within this guide, we will be deliberating the way to use the nested “while” loop in bash programming. As most of our work would be through a terminal, so we need to open it first. Hence, we are trying the shortcut key “Ctrl+Alt+T” to open the terminal shell application of the Ubuntu 20.04 system.

Let’s start creating a nested “while” loop in the bash script of Ubuntu 20.04. This will be started from the creation of a new file in a terminal with the help of a simple touch query with the bash file name. The file name is “new.sh”. This file is now held at the home folder of our Ubuntu 20.04 system. We need to open it within some editor to add bash code. So, we have been utilizing the “GNU Nano” editor for this purpose. This file has been opened with the help of a simple “nano” instruction and quickly opens it within the editor. Both the touch and nano instructions are shown in the attached screenshot picture.

The very first example will only explain the single while loop in bash. The empty nano editor is opened via the terminal shell. It’s time to add some bash code to it. We have started our bash code with the bash extension i.e. “#!/bin/sh”. We have adjusted a variable “var” with a value of 5. The while loop has been started with square brackets around its condition. It is using the comparison operator “lt” to test if the variable “var” value is less than value 10. As the condition is true, it will execute the “do” part until “done”. So, within the while loop, it has been using the echo statement to display the variable value. The next consecutive line is incrementing the variable “var” value by 1 each time the condition meets. The script ends here.

Let’s just run the single while loop code in the terminal with the “bash” command as below. It will increment the variable value until it equals 10 and then stop. You can see the output below.

Let’s have our second example which will show us how to use the nested while loop in bash. So, the code has been started with the same bash extension in the nano bash file. The iterator “i” has been set to 0. The while loop has been started with these square brackets shown in the code. It is using the variable “i’ to check whether it is less than 10 or not via the comparison operator “lt”. As the condition meets i.e., 0 is less than 10, it will execute the “do” part of a loop. The do part contains an echo statement to display the variable “i” current value and an increment statement to increment the value of variable ‘i’ by 3. This incremented value will be saved again to the variable ‘I’.

The next inner “while” loop will not be executed as the condition in it doesn’t meet i.e., 3 does not equal to 6. So, the outer while loop will continue to execute until it reaches the value 6. In its 3rd iteration, the value will reach 6 and the inner “while” loop will be executed as the condition satisfies. Within the inner “while” loop, we have got two echo statements. One is to show the current iteration or variable “i” value. The second statement is to tell that the variable “i” value will be decremented by 2 from now. After both echo statements, we have used the decrement statement to decrement the current value of the variable “i” by 2 and save it again to it. Both the loops end here as the program is completed. 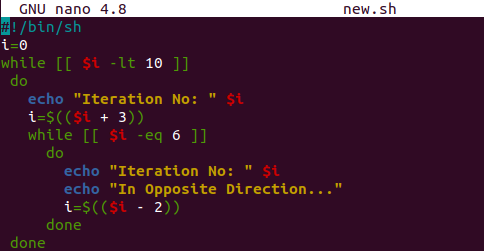 Here comes the last example. We have initialized a variable “var” with a value of 2. The bash code contains nested “while” loops i.e., inner and outer. The outer loop checks if the “var” value is less than 20, it will display that value and increment it by 2 until it reached 20. The inner loop is utilizing the equal operator to check whether the value is equal to 20 or not. If so, then it will display that value and display the message that the loop is ending here. The break statement is used here to simply quit the program here.

The execution of this bash program shows that the initial value “2” has been increment by 2 until it reaches 20. After that, the program has been stopped as per the break statement. 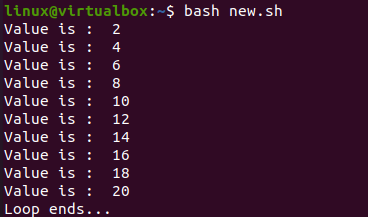