Consider the following towns: A, B, C, D, E, and F connected by roads:

The towns: A, B, C, D, E, and F are the vertices of a graph. The roads are the edges of the graph. However, this graph will be represented in a mathematical data structure, differently from its geographical layout.

There are different paths from A to E, with different lengths, as follows:

From this listing, the shortest path is A-C-E-F, with a total length of 14 units.

The main aim of this article is to find the running time Dijkstra’s algorithm takes to obtain the shortest path from A to E. The time will not be given in seconds or minutes. It is the relative total execution time, called Time Complexity, that will be given. C++ coding is provided as well.

The mathematical graph chosen for this article is called Adjacency Matrix. It is: 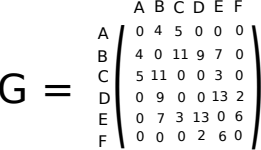 So, the matrix consists of edges, with the row and column headers of the same vertices. The matrix is the main structure needed in the program. Two other vectors (arrays) are used in this basic program.

The algorithm, as relevant to this task, is as follows:

– Assign a tentative path length value to all vertices: the path length from source to the source is assigned a value of zero; the path length from source to any other vertex is assigned the one value of infinity, i.e., a value that is higher than the highest path possible, in the graph. The value of each vertex would be changed at least once, from a high value to a lower value, as the algorithm continues. Possible vertices for the complete shortest path will be focused upon, beginning from the source vertex (A). The vertex with the focus is called the current vertex. The current vertex has neighbors, better visualized from the actual network (geographical layout) above.

network is used to illustrate Dijkstra’s algorithm. It is re-displayed below for easy reference.

It begins at the source, “A” with a path length of zero. “A” is considered as visited and removed from the unvisited list (set). “A” is sent to a visited list in case the path by vertices will be required.

The path lengths from A to B are:

The path lengths from A to C are:

B and C were the unvisited neighbors of A. Currently, each has a tentative path length. Between B and C, a vertex must be chosen contribute to the final overall path. B and C also have neighbors.

The path length calculated from A to D, through B is:

The path length calculated from A to E, through B is:

The path length calculated from A to C, through B is:

The path length calculated from A to B, through C is:

The path length calculated from A to E through C is:

Those are the path lengths through C to C’s neighbors, from the visited vertex, “A”.

All the tentative calculated part-path lengths so far are:

The shortest of these part-path lengths is:

So the vertex, C, is chosen for the way forward. This is the next visited vertex. Any possible path through B is abandoned. C is then considered visited. The vertex C is removed from the unvisited list. C is sent to the visited list (to be after A).

The shortest for these part-paths is:

At this point, E is the way forward. This is the next visited vertex. Any possible path through D is abandoned. E is removed from the unvisited list and added to the visited list (to be after C).

The shortest of these part-path lengths is:

At this point, F is the way forward. It is considered visited. F is removed from the unvisited list and added to the visited list (to be after E).

The graph for the network is a two-dimensional array. It is:

For convenience, the vertices will be identified by numbers, using ASCII coding, as follows:

The beginning of the program is:

This function obtains all the neighbors ahead of a vertex, beginning from just after the previously visited related vertex. The function code is:

The dijkstra’s algorithm starts with this function to handle the source code situation. The function code is:

The above code segments can be assembled in the order given to form the program.

A suitable C++ main function is:

Time Complexity is the relative running time. Assuming that the sorting of the vertices (neighbors) is good, the above program is said to have the following time complexity:

where |E| is the number of edges, |V| is the number of vertices, and a log is log2. The big-O with its brackets, () is a way to indicate that the expression in the parenthesis is time complexity (relative running time).

The worst-case time complexity for Dijkstra’s algorithm is: O(|V|2)
[/cc]