`rm` command can be used with option and without the option for the different types of delete. The syntax of the `rm` command is given below.

Example-1: Delete the file using `rm` command without the option

# Set the filename
filename='test.txt'
# Create an empty file
touch $filename
# Check the file is exists or not
if [ -f $filename ]; then
rm test.txt
echo "$filename is removed"
fi

Example-2: Delete the file using `rm` command with -i option

The following script will take the filename by a command-line argument. If the file exists then, it will print a remove message with the filename for ‘-v’ option.

More than one file can be deleted by using ‘rm’ command and separating the filenames with space. In the following script, multiple filenames will be taken from the command line arguments. If any file does not exist, then it will show a message otherwise filenames will be combined by the space and stored into the variable named ‘files’. Next, the rm command will be executed with the ‘files’ variable to remove multiple files.

# Check the multiple filenames are given or not
if [ $# > 2 ]; then
# Reading argument values using loop
for argval in "[email protected]"
do
if [ -f $argval ]; then
files+=$argval$space
else
echo "$argval does not exist"
fi
done

# Remove files
rm  $files
echo "files are removed."
else
echo "Filenames are not provided, or filename does not exist"
fi 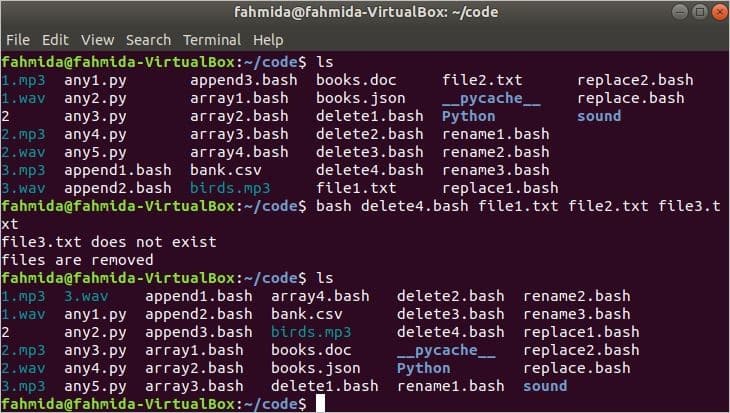 The above examples show the different types of ways to delete the file using a bash script to help bash users to do this type of task easily.