Python’s decorators are an extremely helpful feature as they let the programmers customize how a method or class behaves. Decorators enable us to encapsulate another function to modify its functionality temporarily while extending the functionality of the wrapped method. Let’s first comprehend a few concepts that would be helpful while learning about decorators before we get too deeply into them.

When to Utilize a Python Decorator

Whenever you want to alter a function’s behavior without changing the method itself, you’ll utilize a decorator. Adding logs, analyzing performance, executing caching, confirming authorization, and other tasks are a few notable examples. Whenever you need to execute an identical code on many processes, you can, however, employ one. You won’t have to write the duplicate programs as a result.

We need to understand first a few fundamental Python concepts before we learn about decorators.

For a good understanding, consider the following instances:

We’ll provide the method to another function as a parameter. Here, the greet method accepts a second function as an argument (shout and whisper). The greet function then calls other defined functions that were specified as an input.

The shout() function is defined at the beginning of the program. Here, the argument for the shout function is the “t” element. This gives the text back in upper case because we utilized the upper() function. The whisper() method is defined in the following step. This function outputs the text that was passed as an argument in the lower format. The greet() method is now used. Here, we provide the “func” parameter which is defined in the following line. We specify the value of the “func” attribute that we have to depict on the console. Finally, we employ the print() function to show the values of both the shout and whisper methods.

As was already said, decorators can be utilized to change a function or class’ behavior. Functions are defined within the wrapper function when using decorators, where they are passed as parameters to other functions.

This illustration can illustrate how a decorator alters a function’s behavior. 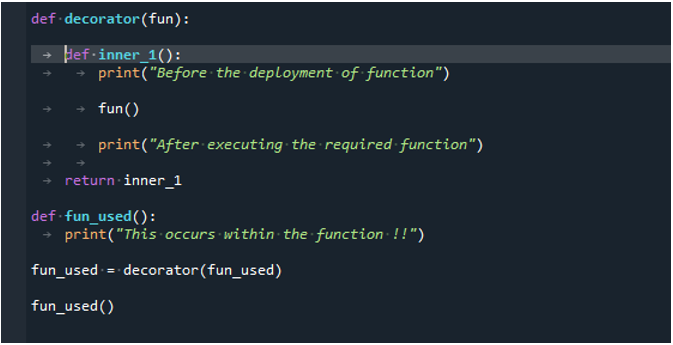 First of all, we define the decorator. Next, we call the inner1() function. It is a wrapper method in which the parameter is called. Within this function, we utilize the print() function. Then, we call the actual function inside the wrapper function. We again employ the print() method.in the next line. We define a fun_used() method to be called inside the wrapper. Now, we pass the “fun_used” within the decorator to modify its behavior. To terminate the code, we invoke the method.

Let’s move on to a different instance in which we can determine how long a function takes to execute by utilizing a decorator. 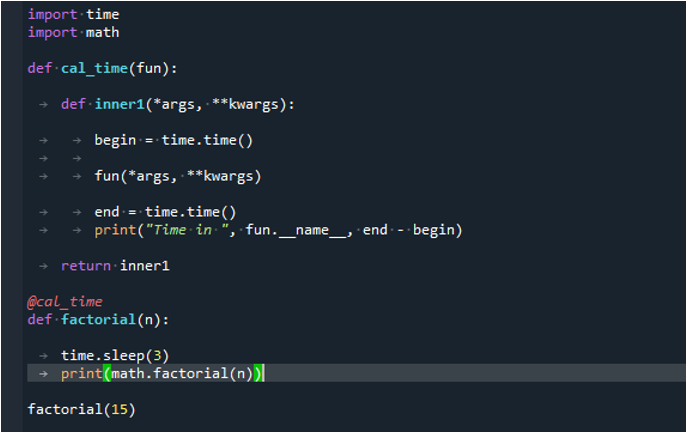 Here, we import the required header files which include time and math. The “time” library is responsible for calculating the “time” and the “math” module is responsible for all the mathematical operations. We utilize a decorator to calculate the duration taken by the function. We define the cal_time() method. This function contains any required function as a parameter. We employ the inner1() function. We provide the *args and **kwargs as the arguments of the function. In the next step, we store the duration before implementing the function. We call the time() method associated with the “time” module. Then, we acquire the time after executing the method. We again utilize the time() function and its value is saved in the “end” variable.