XFCE is a light desktop environment compatible with low resource systems while keeping a nice visual interface and effects like screen rotation and transparency. Xfce is extremely user friendly and it is a lot more user friendly than new GNOME versions for PC users without touch screen.

XFCE is user friendly and among its features there are:

Manages the placement of windows on the screen, provides window decorations and manages workspaces or virtual desktops.

Sets the background image and provides a root window menu, desktop icons or minimized icons and a windows list.

Controls the login and power management of the desktop and allows you to store multiple login sessions.

Shows the applications installed on your system in categories, so you can quickly find and launch them.

Provides the basic file management features and unique utilities like the bulk renamer.

Tools to control the various settings of the desktop like keyboard shortcuts, appearance, display settings etcetera.

Below, after a brief description of Gnome you’ll find how to easily setup XFCE on Debian.

Gnome used to lead the desktop environments market years ago. Lately Gnome 3, the last generation of this X Window system started being left behind by the community after changing the interface to a mobile device styled one leaving the classic desktop.

Gnome 3 allows to edit apps permission from the graphical environment and fractional scaling, keeping the screen look on HiDPI monitors, Clearlooks was replaced by the Adwaita theme yet there isn’t too much can be said in defense of this X Window system since it left the classic menu bar and desktop unless you will use on a touch screen device which would be the exception putting Gnome back on the top, otherwise by using GNOME on a computer without a touchscreen you lose all advantages a PC offers over a mobile device like a phone or tablet. The disappointment of the community regarding GNOME changes resulted in the development of MATE and Cinnamon desktop environments, which are great, right now this tutorial is being written from MATE, the most fidel copy of former GNOME versions who respected the desktop metaphor.

There is not too much to say about GNOME, as with any X Window system it is a matter of taste, it comes by default in most Linux distributions like Debian or Gnome, yet below you will find instructions on how to setup it or a different X Window Manager on Debian.

Setting Xfce or Gnome in Debian

By default Debian brings GNOME despite it allows to choose different X Window managers, luckily you can always change your desktop environment easily thanks to the tasksel command.

To change your desktop environment on Debian run:

The first screen will show an informative text, press OK to continue.

Tasksel will start the installation process for the packages you selected.

Once finished the process, tasksel will close returning the terminal control. To select any of the newly installed desktop environments logout and on the login screen you’ll see a gear icon  , press it and a dropdown menu will display allowing you the select the desktop environment to run. 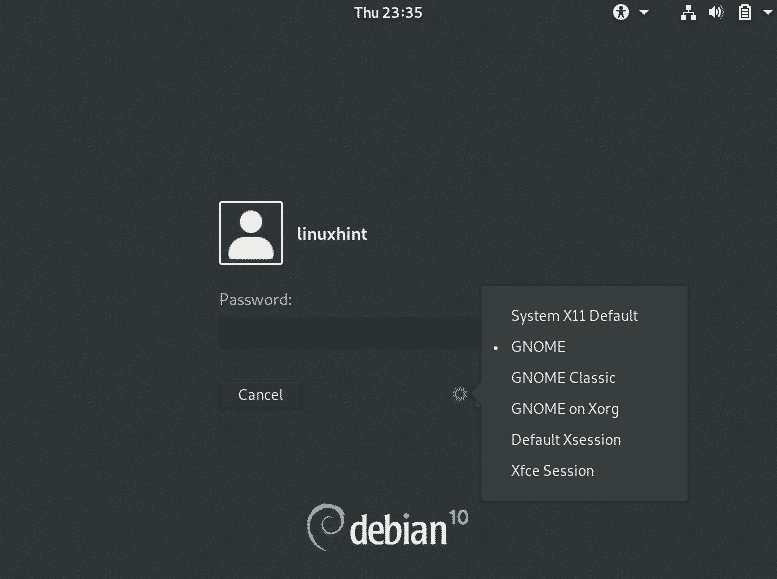 If you installed additional X Window systems with tasksel such as KDE Plasma or MATE they will be listed in this menu too.

Now you can use both desktop environments and compare them to make your best choice.

Below I made several tests comparing Xfce resources usage against GNOME. Measurement was done using the command top.
The first test shows each desktop environment with only the terminal opened by default. 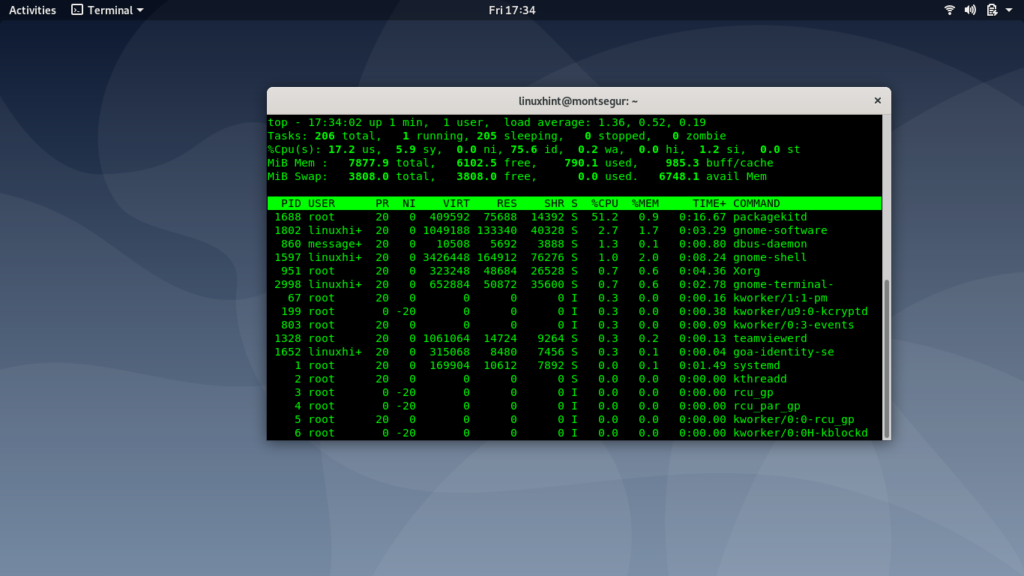 As you can see in the CPU line there are different columns:

us:  user cpu time, CPU time spent in user space, processes executed by the user. The screenshot above, which belongs to GNOME shows 17.2% of CPU used by the user.

sy: system cpu time, CPU time spent in kernel space. Processes executed by the system. The screenshot above, which belongs to GNOME shows 5.9% of CUP is used by the system.

Then you can see  the memory and the swap. In this case GNOME shows 790 MB ram being used, and 0% Swap.

Contrary to Gnome Xfce in the image below shows 1.0 % of CPU used by the user, 0,5 used by the system and 552 MB ram. The difference is very considerable, specially taking in account Gimp was used to take the screenshots. 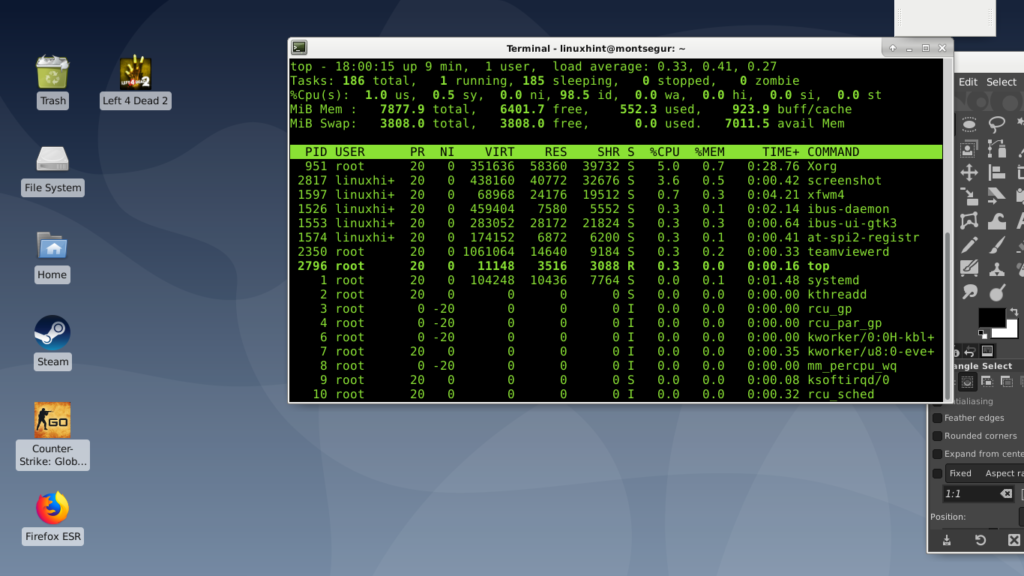 A reboot happened for each screenshot series on each desktop environment, the following example shows each desktop manager with its file manager opened: 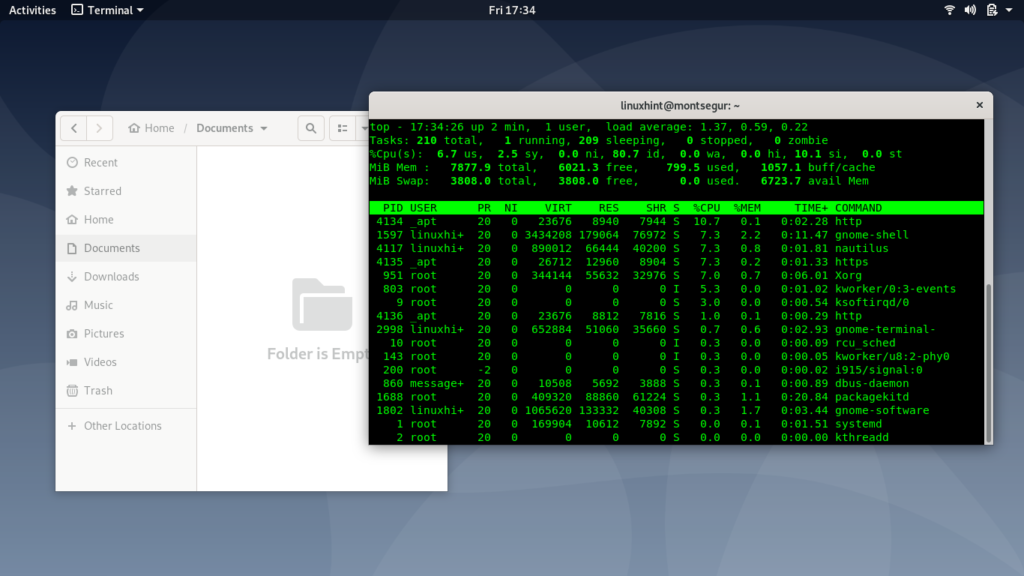 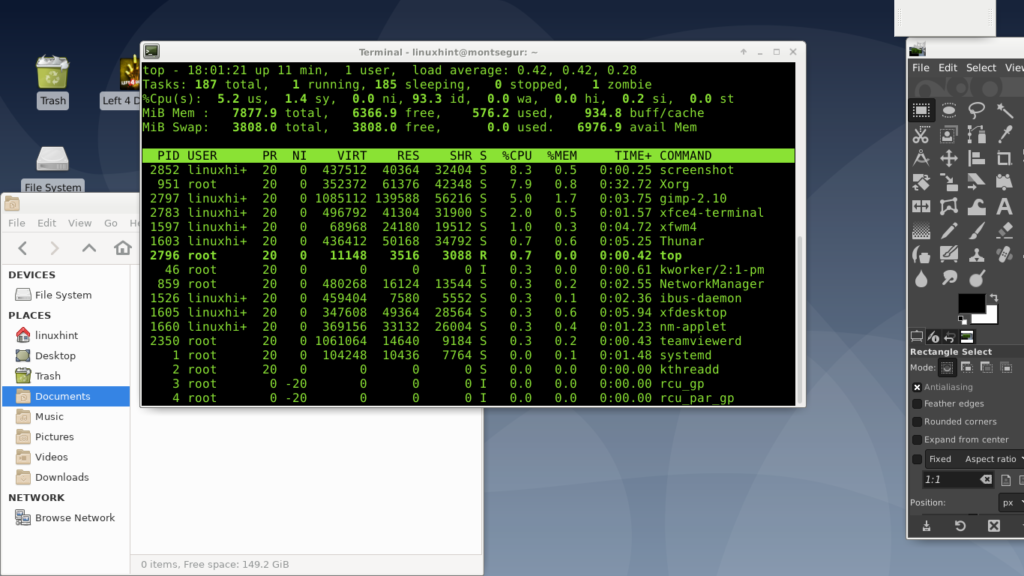 Finally an example which broke the trend, I opened Steam on GNOME: 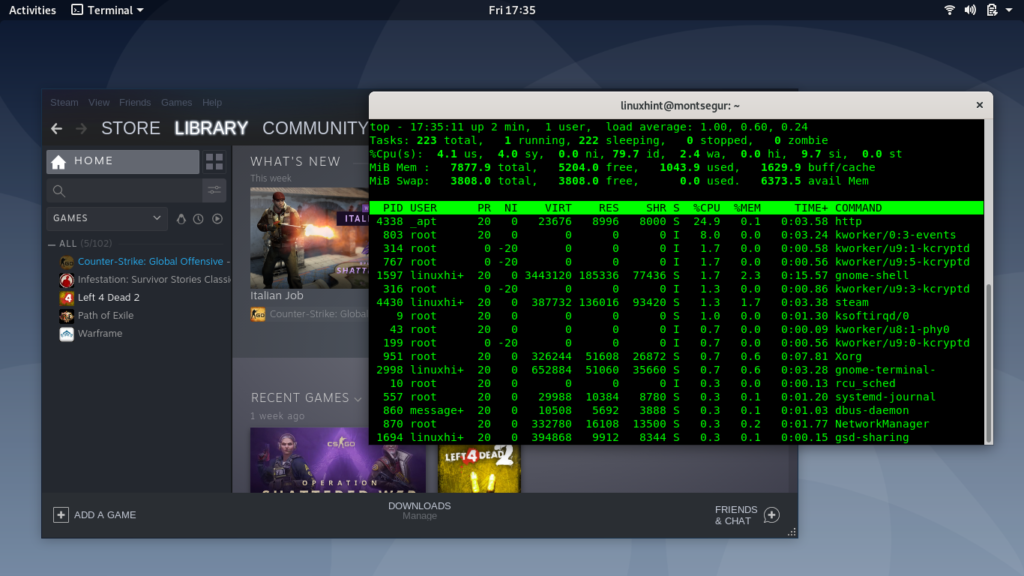 In this case the user memory was considerably greater with Xfce. 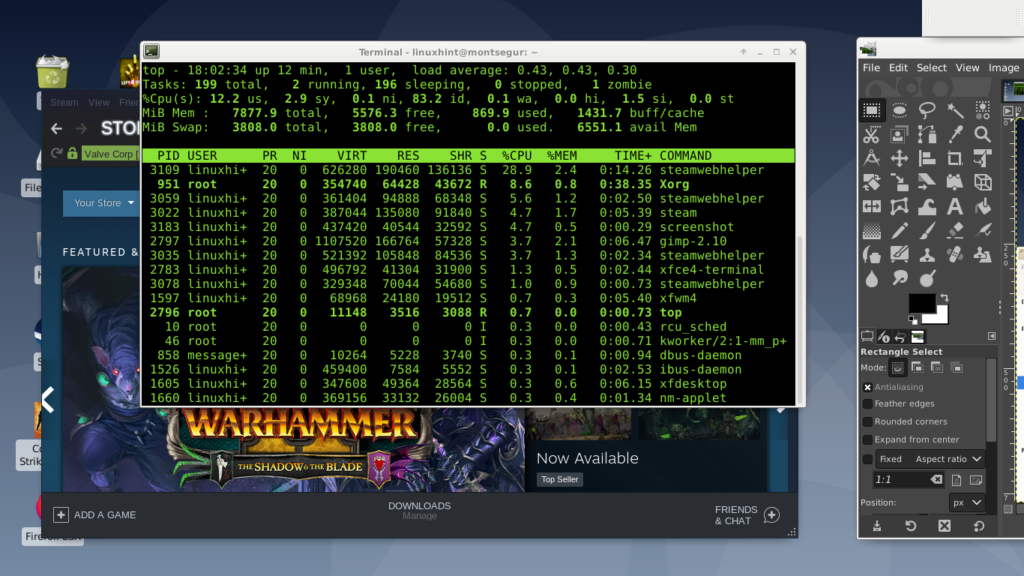 I hope you found this brief article on Debian Xfce vs Gnome useful, thank you for reading it. Keep following LinuxHint for additional updates and tips on Linux and Networking.