A stream in the Dart programming language is defined as a series of asynchronous events. It is pretty much like the iterable data structure. However, the main difference between a stream and an iterable is that in the case of the latter one, you need to manually ask for the upcoming events, whereas, in the case of the former one, the stream itself keeps telling you that the next event is ready. This process continues until there are no more events left in the stream to be read. The Dart streams also resemble pipes in which you insert a value from one end, and this value is read by the receiver at the other end. In this tutorial, we will learn the basic usage of the streams in the Dart programming language in Ubuntu 20.04.

How to Use the Streams in the Dart Programming Language in Ubuntu 20.04?

To use the streams in the Dart programming language effectively, you need to understand the following two examples that have been implemented on a Ubuntu 20.04 system:

Example # 1: Creating a Dart Stream for Calculating the Sum of Multiple Integers

In this example, we will be creating a Dart stream that will keep on reading integers until they exist, and as soon as it reads a new one, it will add that to the existing ones. This process will carry on until there are no further integers left, after which you will be able to get the sum of all of these integers. You will be able to understand it clearly by going through the Dart script shown in the image below: 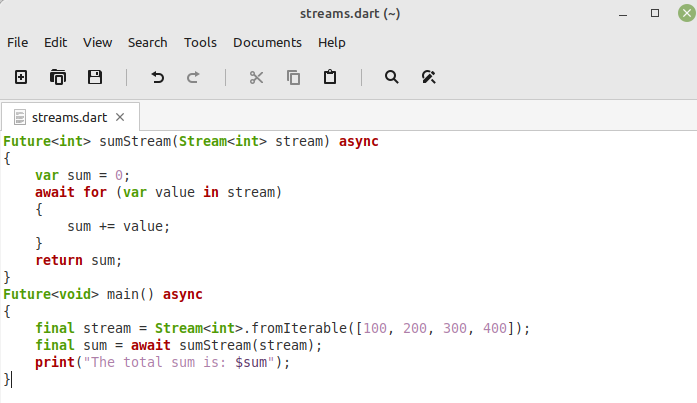 In this example, we have first created an integer type “Future,” i.e., it is capable of returning an integer value which is “sum” in this case. We have named this future “sumStream.” This is capable of accepting a stream of integers. Then, we have also used the “async” keyword while defining this future. This keyword is used whenever you want to use the “await for” loop within a script. Inside this future, we have created a variable named “sum” and initialized it with “0” so that it does not contain any garbage value.

Then, we have declared the “main()” function having the “Future<void>” return type and have also used the “async” keyword with its declaration. After that, we have declared and initialized a stream of four different integers within our driver function. Then, we have created a “sum” variable for holding the result of the “sumStream” future. We have called this future with the “await” keyword while passing the integer stream to it. Finally, we have used a “print” statement for printing the result of this script, i.e., the sum of the integer stream on the terminal.

For the execution of this Dart script, we have utilized the subsequent command:

The output of our Dart script, i.e., the sum of our integer stream, is shown in the image below:

Example # 2: Creating a Dart Stream for Calculating the Product of Multiple Integers

In this example, we want to create a Dart stream for calculating the product of multiple integers. This example is pretty much similar to our first example in terms of the usage of the Dart streams; however, its main logic, i.e., the calculation of the product, will differ from the first example. The following Dart script explains this functionality: 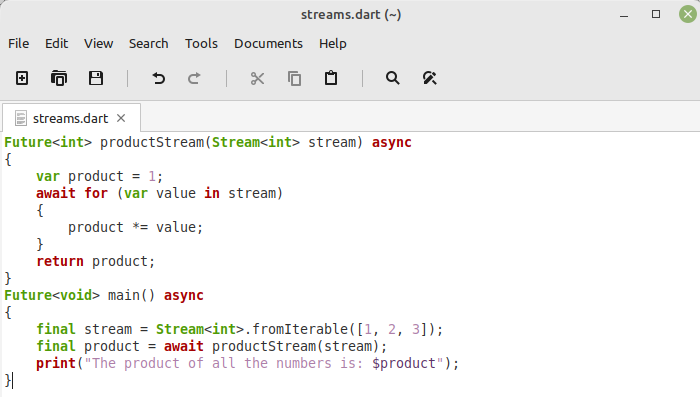 In our second example, we have declared a Dart future with the integer return type. We have named this future “productStream,” and this future will take an integer stream as input. Again, we have used the “async” keyword since we will be using the “await for” loop in our future. Inside this future, we have declared a variable named “product” and have assigned to it the value “1”. This time, we have not initialized this variable with “0” as we did in the case of the sum. It is so because multiplying any number with “0” reduces the whole output to “0”. This is exactly why we need to keep the value of this variable “1” if we wish to multiply the elements of the integer stream.

The image shown below displays the output of our “productStream” future, i.e., the product of all the elements of our integer stream.

This article was designed to share with you a relatively new concept associated with the Dart programming language, i.e., Dart streams. To make this concept understandable for you, we have implemented two simple examples in Ubuntu 20.04 and have explained them both in-depth. After going through these two examples, you will be able to grasp the concept of streams in the Dart programming language very well.