“Every programming language uses comments to help future programmers or other programmers understand the code. Comments are a collection of statements that the compiler is not supposed to execute. Comment statements are disregarded throughout the execution of the program. They professionally document the code. Comments in source code provide details or justifications about variables, operations, packages, or statements. Comments, in general, give a rapid overview of what’s occurring in the script. Programmers should make use of the comment to improve their skills.

It improves the readability of the code for other programmers as well as for yourself, allowing you to provide information on how complex things are handled in the program for deeper understanding and maintenance. We’ll explore the different types of comments Dart supports in this article.”

Different Type of Comment in a Dart in Ubuntu 20.04?

In Dart, you can make comments in a variety of ways as follows:

Between the dart statements, you can add comments wherever in the program. The compiler/interpreter just dismisses the comments in our code, resulting in no change to the program’s final output. In a nutshell, comments serve as a brief, comprehensible explanation for specific code. Note that comments should not be used to explain badly written code. Always attempt to produce clear, readable code before adding comments. We have different comment types used in the dart script as follows:

You can notice that the single-line comment text is ignored here by the dart compiler; only the “Area” is displayed, which we have passed inside the print function. 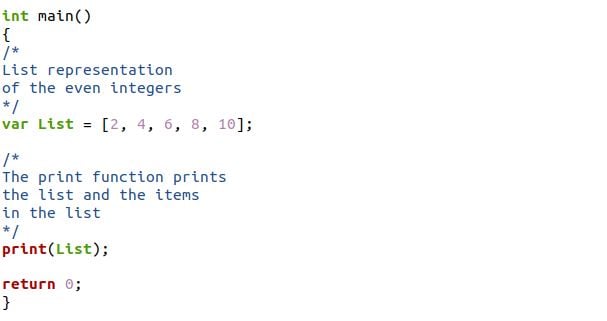 Upon interpretation, we have only a list as an output. The multiline comment text is not displayed on the screen. It is eliminated by default by the compiler.

You can use a doc single-line comment on successive lines, which is the same as a multi-line comment. The Dart interpreter excludes these lines except for those put inside the curly brackets. Triple slash or triple forward slash can be used in a single-line Doc comment. 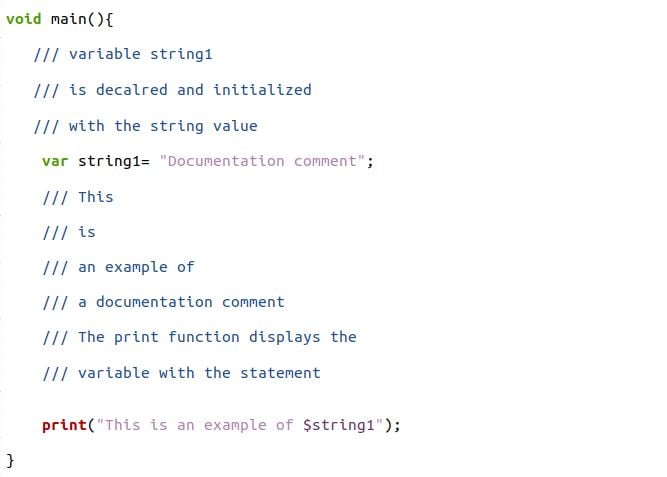 Example # 4: Using the Doc Multiline Line Comment in a Dart in Ubuntu 20.04

These characters “**/**…*/**” are used to make multi-line Doc comments. A multi-line Doc remark is shown below. The following example explains using documentation multiline comments in the dart code.

The doc multiline comments are not used for execution purposes. They are ignored by the compiler, as shown on the shell screen.

Although we consider ourselves programmers, most of the text in a source code is designed for human reading. A few seconds of writing a simple, precise comment can save one of many person-hours. Every programming language supports comments in the specific code for its reader’s convenience. Although, dart language has numerous ways to create comments in the code. We have a general representation of the dart comments with the four examples.