Minecraft game comes with lots of different unique features that are there to help you in certain situations. One of which are the enchantments that give you a certain advantage that you don’t have before. There are many different enchantments available in the game, and one of them is the curse of vanishing which will be discussed in this article.

What is the Curse of Vanishing Enchantment

You can apply this enchantment to your armor, and it has only one significant role which is to disappear that item after you die so that others won’t be able to use that item. This is one of the least favorite enchantments of the players among all available as others will have a greater impact. For example, the Looting Enchantment which you can use to collect valuable or additional items that are not possible without it. Another one is the mending enchantment which is used to increase the durability of any weapon so that it can withstand a longer duration while fighting with the mobs.

How to Do the Curse of Vanishing Enchantment

The tools that are needed to perform any kind of enchantment is the anvil and making it requires you to collect 3 blocks of iron and 4 iron ingots. Now the first item that you needed is the iron ingots as this same item will also be used to make blocks of iron as well.

Making Iron Ingots: The first step of this process is to collect some iron ores first and for collecting them you need to have at least a stone pickaxe. You can make it using 2 sticks and 3 cobblestones and additional details regarding this can be found in this article.

After that, you need to mine the iron ore with the stone pickaxe and then you will need a furnace that will be responsible for converting these iron ores to iron ingots.

While making iron ingots you need to make sure that you collect at least 31 iron ores and convert them to iron ingots as 27 from these will be used to make 3 blocks of iron as well which we will discuss in the next section.

Making Block of Iron: The recipe for making the block of iron is pretty straightforward when you collect the required iron ingots as all you need to do is to place 9 of them on the crafting table as shown below:

Making the Anvil: You need to repeat this step at least three times as you need 3 blocks of iron and after that, you need to place them along with the other 4 iron ingots that you have previously on the crafting table to make the anvil.

The next item that you will need is to find a librarian with the lectern that we have previously covered in this article. You can use a villager to trade the enchantment book but doing that is not an easy task as you will get random items. So, you need to try as long as you should be able to find the curse of vanishing book. 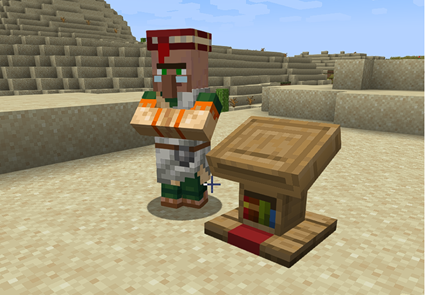 Right-click on the librarian will show you a trading option:

Trading with him continuously will increase the level of the librarian and he will show you more trading options.

The curse of vanishing has one significant purpose which is to disappear your armor and weapons after you die in the Minecraft game. So, killing you in the game is futile as no one can steal your belongings from you. The steps that are needed to do this enchantment in the game have been discussed in detail in this article.