We will write some HTML code for creating and styling toggle switches in CSS. For demonstrating the given examples, we’re using Visual Studio Code. As a result, we will open the new file and pick the language “HTML,” which follows in creating an HTML file. Then we begin to write the code in the file created here. We have to save this code when it’s finished, and the “.html” file extension is automatically added to the file name. We also create some text which we want to present in bold, so we are using “<b>” and write the line inside these “<b>” opening and closing tags. After this, we will create a toggle switch here in this code that represents off or on. It will allow us to turn off or on the switch. Now, we are moving towards the CSS code for giving some style to this toggle switch. 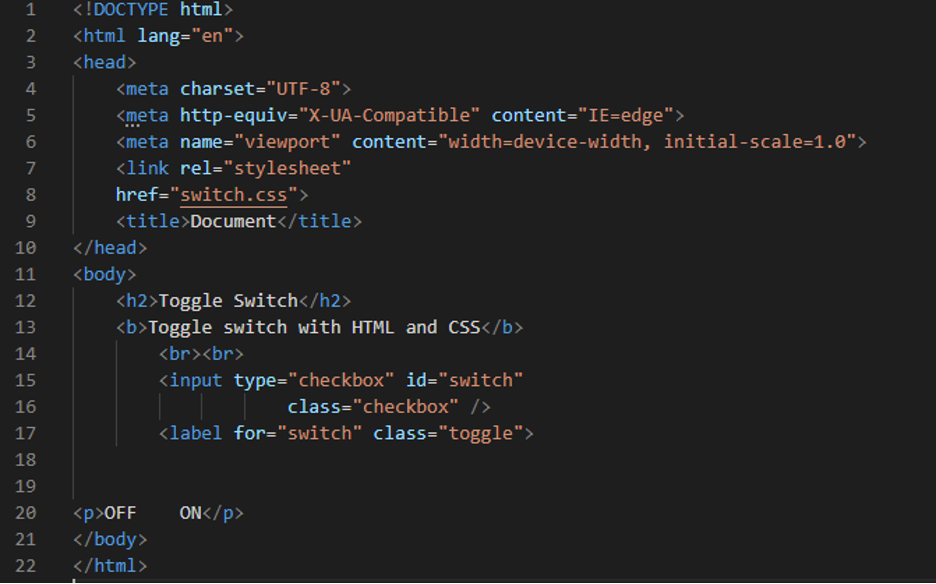 First, we align all the body elements using “text-align” to the “center” and apply this property to the “body.” Then, change the “color” of the heading to “green” to make it attractive. Now, we have to style the “toggle.” We use “toggle” and then use the styling properties here. The “display” we are using here is “inline-block.” We also set its “width” and “height” to “100px” and “52px,” respectively. The “background-color” of this toggle is “red,” and its “border-radius” is “30px,” so its edges are curved.

Then we also set a “border” around this toggle button of “2px” width in “solid” type and also in “grey” color. After styling this, we are going to use the “after” selector with this “toggle,” and as we know that we must have “content” when we use this “after” selector in CSS. After this content, we are setting its “position” here to “absolute,” and the “width” and “height” is “50px” each. This time the “background-color” is “grey.” We also set its “top” and “left” to “1px” for each of them. We are applying the “transition” on this toggle of “0.5s”. The styling for the “toggle: after” is completed here, and we will style the paragraph a little bit using two properties inside the curly braces of “p.”

We just change its “font-family” to “Algerian” and then “bold” this paragraph using the “font-weight” property. We are setting the “left” to “45px” so it moves “45px” when this toggle is checked. And its color changes to “green.” Also, set this “display” of the “checkbox” to “none.” 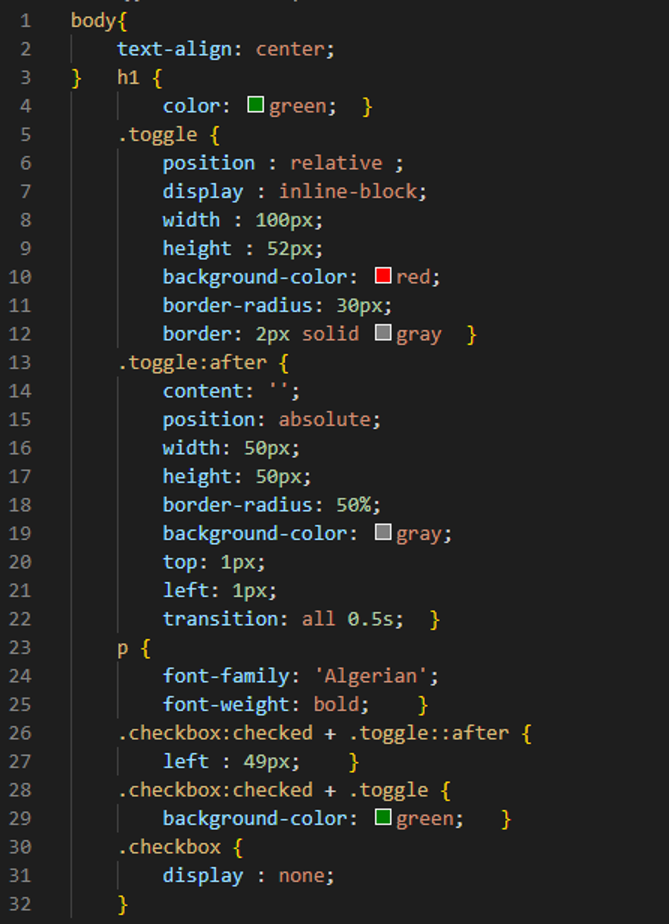 We also show this switch in the output below, and in the first output, you can see that we have two possibilities here in this switch. In this screenshot, the switch is “off,” and its color is “red.” 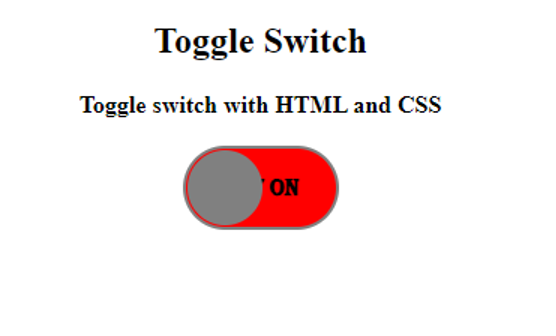 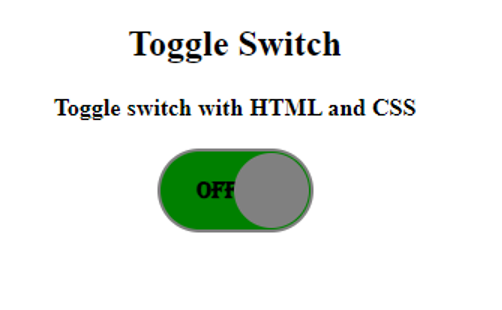 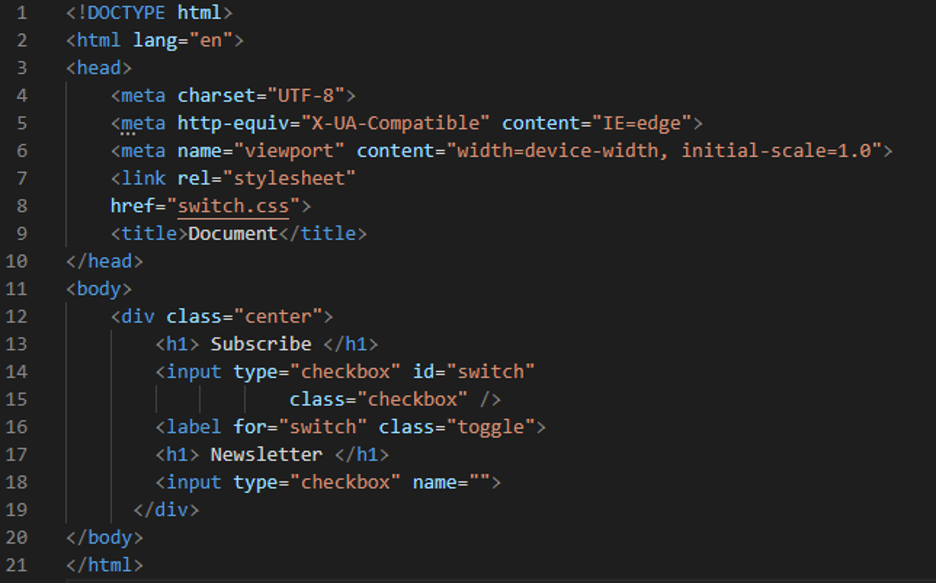 When we use all these, all the elements are set in the center vertically and horizontally. Then, we style the “input [type=checkbox]” using this. The “margin” we use for this is “10px” and “relative” in “position.” The “width” of this checkbox is “120px” and also “40px” in its height. We also set its “webkit-appearance” to “none.” We are using its “background” in the “linear-gradient” form. The “outline” for this is also “none,” and for making its edges curve, we are using the “border-radius” property here and set it to “20px”. We apply the “box-shadow” and set its value to “0 0 0 4px”. Then we style the checkbox when it is checked and set its “background” to “linear-gradient,” which is “0deg” and “orange.” We use the same “box-shadow” here as we used above, and this is for the “nth-of-type (1)”. The “nth-of-type” is a selector for selecting one or more elements. We also style the checked checkbox for the “nth-of-type (2)” and set its “background” to the “linear-gradient” of “0deg” and “blue.” We also style the checkbox when it is not checked. So here, we use the “before” selector, and the “after” or “before” selector must have a “content.” The “position” we set here is “absolute,” and its “top” is “0” and also the same for the “left.” It is “80px” in its “width” and “40px” in “height.” We again use the “linear-gradient” for the “background.” This time we use “black” and “grey” color. We also use the “transform” property and “scale” it to x, y as “0.98, 0.96”. We set its “transition” property to “0.5s”. The “left” is set to “40px” before being checked. We also use the “after” selector and also style this.

We want to style the headings using “h1” and use some properties here. The “margin” is “0,” and the “padding” is also “0”. We use the “sans-serif” “font-family” for these headings. Also, align these headings to the “center.” The font “color” of these headings is “white” and “16px” in size. We also set the top and bottom “padding” to “15px” and “0px” for the left and right. We use “upper-case” so the headings text will be converted to the uppercase, and the “letter-spacing” is “4px” for all headings. 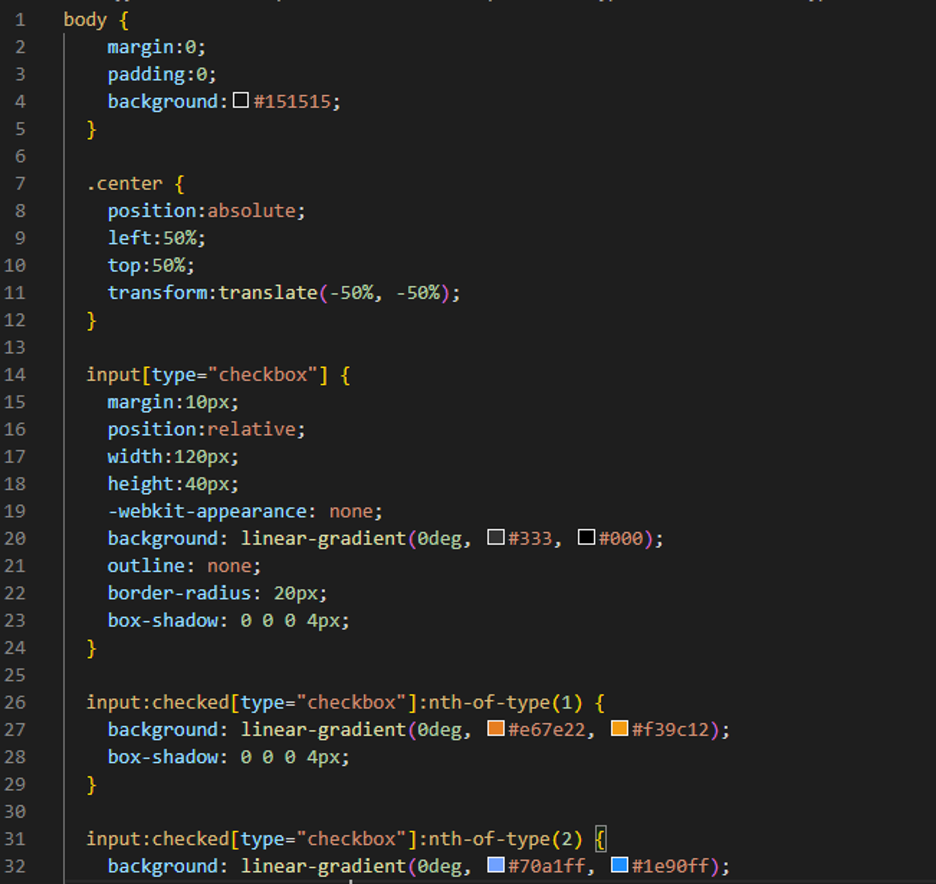 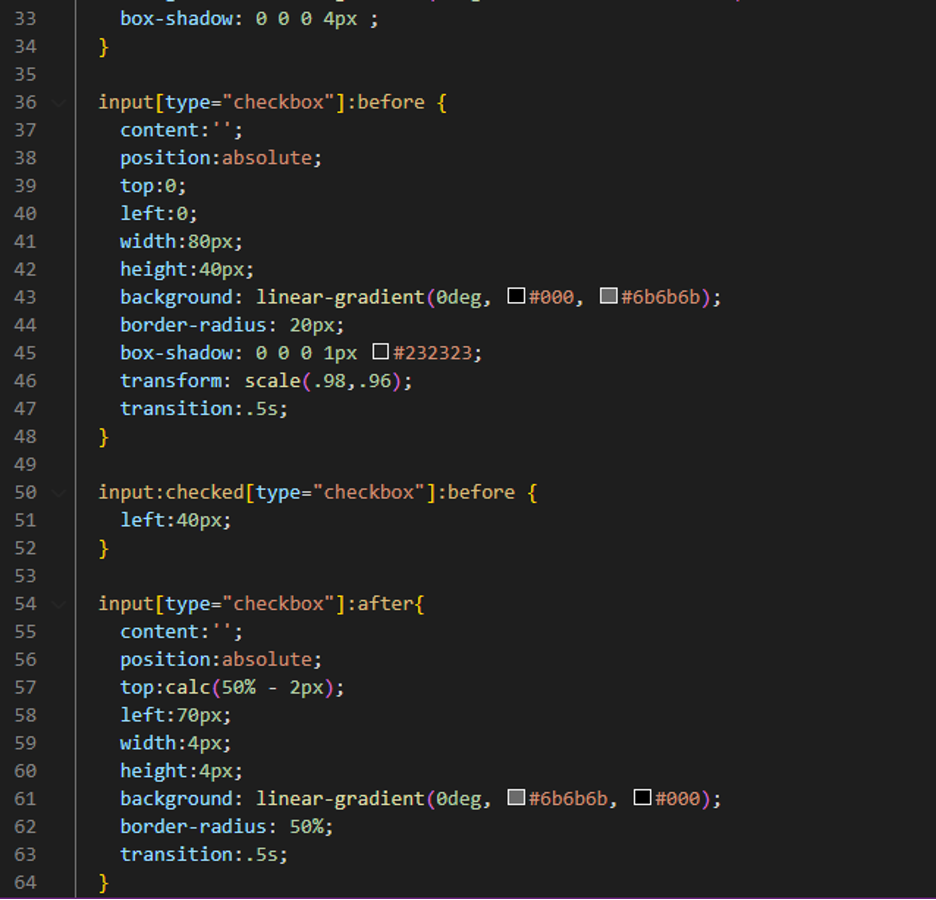 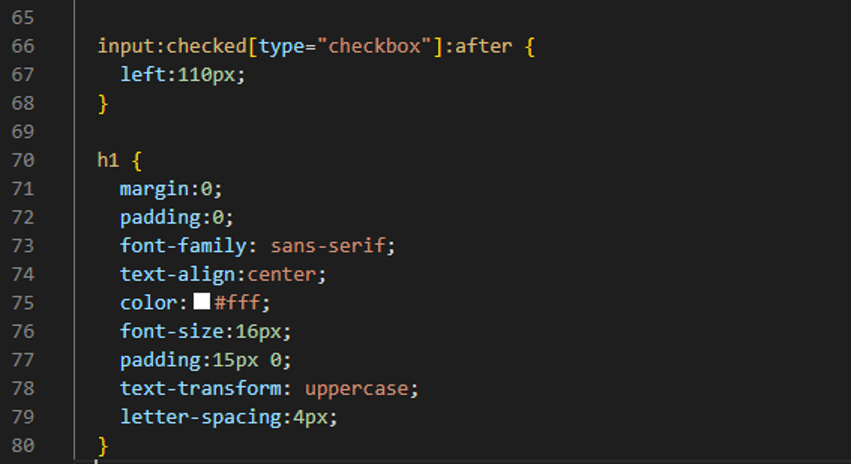 We have provided two screenshots here as the output. The first output shows before this toggle switch is checked, and the second screenshot is when we checked both toggle switches. 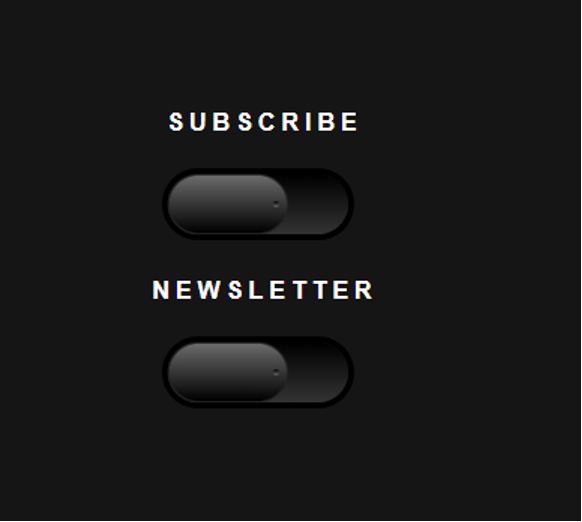 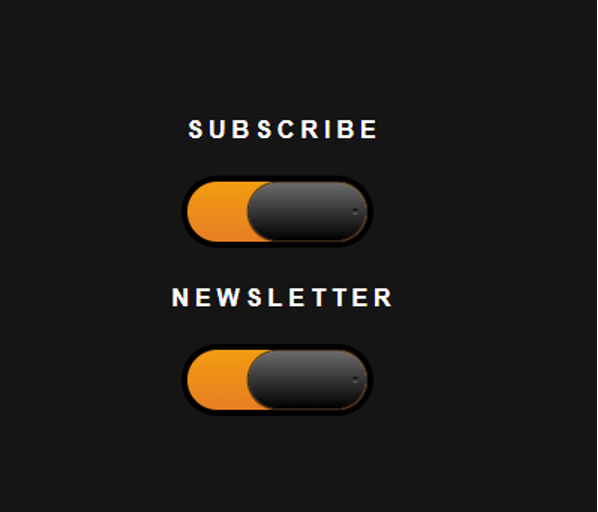