The hover property of CSS is a selector of HTML CSS styling. It can be utilized to pick particular elements along with hovering over them. The hovering means that when you took your mouse to a specific word or element on an HTML web page, the color of the particular word would change for a while. When you take away the mouse pointer somewhere else, the color would be changed to its original again. If you have used a hover animation for an element in your HTML tag already then this article will not be a problem for you because the not hover property of CSS is exactly the opposite of hover. For this purpose, we have been utilizing the Visual Studio code tool.

We will be taking a look at some of the elements of HTML by applying the not hover property on them. We have started the first example from the basic HTML tag that is a must in any HTML code because without it our code won’t work anyway. After the HTML tag, there is a head tag and the body tag. Within the body tag of our HTML page, we have been using a heading of size 1 or the largest heading of HTML web pages. After this heading, we have been using a div tag to create a new section within our web page.

This tag has been specified as a parent using the class style. Within this main div tag, we have been using the five child tags. All the five child tags are specified as “child” using the class attribute. Also, all the child sections contain different numbering according to their occurrence. The main “div” tag and the body tag are closed. Here comes the title tag that has been used to give a name to this webpage. The style tag has been started with the use of the “parent” class specification to style the “parent” div section of this webpage.

Output for this HTML code has been given below. It shows that the parent section contains 5 child sections as well but the use of not hover property for the child sessions does not let their color change at all.

Let’s take another example of HTML to see the working of not hover property on different elements. We will be initiating this illustration with the same HTML and head tag containing the title tag in it. Let’s take a glance at the body of this HTML page first. Within the body tag, we have been using a heading of the largest size in HTML. We have been using the div tag to create a new section within our HTML web page. This div section would be containing some anchor tags for URLs and some lists. We have been using the first anchor tag on the home word within the main “div” section which is redirecting us to the currently opened page. We have started an unordered list containing a single list item within it. This single list item contains an anchor tag along with the unordered list of a total of 3 list items. These list items would also be referring to some social media sites using the three list items anchor tags within the “li” list tags of HTML. All these three anchor tags have been classified as a child. The unordered list of the single list items has been closed along with the closing of the outer unordered list.

Now, we will be looking at the style tag. The background color for the whole div section has been specified as light green. The anchor tags of this section have no text decoration but the color would be white and the font size would be 25 pixels with a padding of 15px. The display style would be inline-block. The main unordered list has been specified with the inline display, 0 margins, and 0.5-pixel padding. A single list within an ordered list will be displayed in an inline block format. 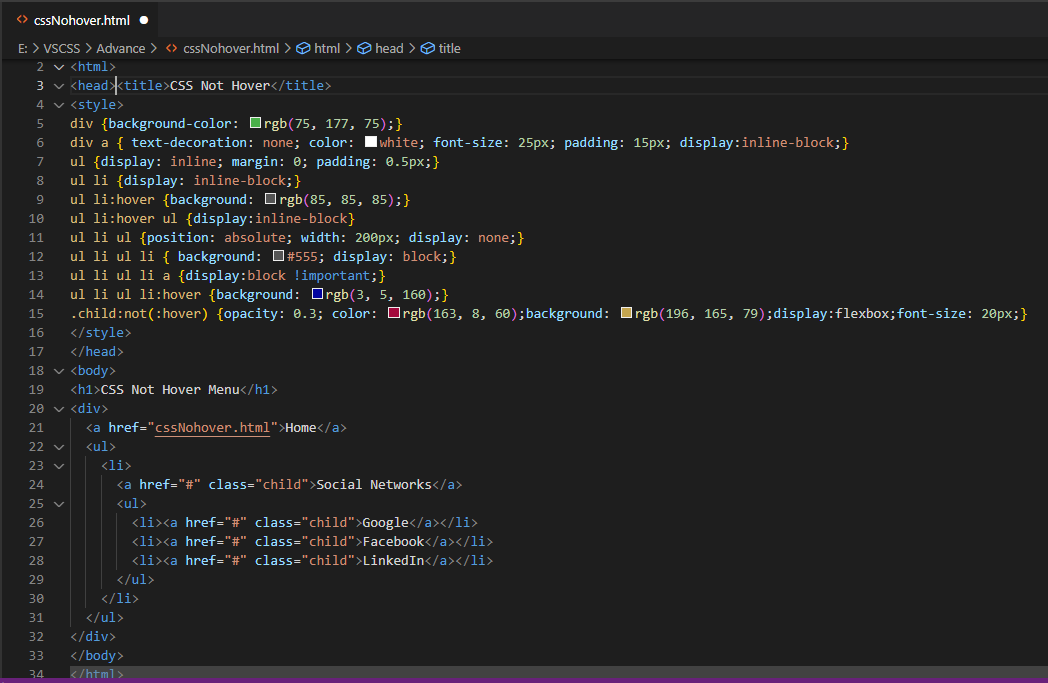 When we execute this code, it displays the shown-below output with Home and Social Networks menu lists.

When we hover over the “social networks”, it got more prominent and the ordered list would be displayed.

Upon hovering over the ordered list item, the background got changed to blue for a while with the text white. The use of not: hover property doesn’t change the color of text though.

This article was about the use of not: hover property of CSS on some HTML elements of a webpage. We have discussed two simple and unique examples to demonstrate them on Visual Studio code. Within the first example, we have tried to use it on the “div” element of HTML, and in the second example, it has been used on the unordered and ordered lists of HTML. Both examples are quite different from each other yet cover the same concept for both.