CSS is a piece of language that is added to another front-end designing language, HTML to create a website or a web page. For the internal and external declaration of CSS, we need to declare ids or classes with the features that we want to apply to the HTML contents.

In CSS or any other programming language, classes play an important role when we talk about the specification of any element. In CSS, classes are created to declare a couple of styles and effects on the HTML elements. All the CSS properties are written inside the class body by assigning values to the properties. For example:

Just like the simple class, nested classes are also created while designing the web pages. The nested phenomenon is not unknown to the developers and designers as well because this term applies to if-else statements, on loops, and etc. The declaration of the CSS nested class is somehow similar to the nested loops. Not only is the class but also HTML tags are affected by the term ‘nested classes’. An HTML tag of content is once declared with a class name. Then, inside this tag, the other tag of the ‘SAME’ HTML content is declared with another class name. In the end, both the tags are closed collectively. This makes the first tag the outer one and the second tag an inner tag. We can use more than one inner tag at a time. Once the class name is mentioned in the outer tags, all inner tags of other html contents will not need to further add any class name with them.

This was the declaration of the class name inside the HTML body. Now, we will see how the classes are declared in the head section. First, the class of the outer HTML tag is declared and then the inner one.

This is somehow the parent-child class relation. Because the outer html tag, for instance, <div> tag has a class ‘class1’. It is declared along with its paragraph content like:

We cannot use the class of paragraphs directly. Now, consider an inner div tag having another class ‘class2’. For the nested class, we will add the class of both tags. The outer and the inner div one.

This is necessary to specify the html content to its class and to whom it belongs. Now, we will try some examples to elaborate on this concept.

In this example, simple body color is added by using the HTML tag. Then, a div tag is used having a CSS class named container.

Now inside the div tag, before closing this div, we will add another div with a new CSS class name. 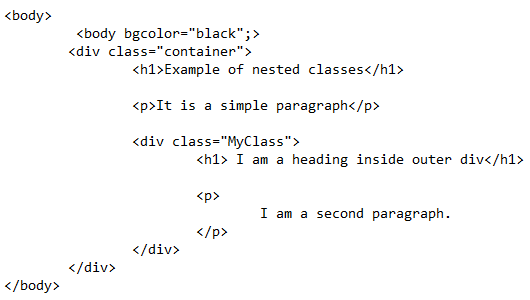 Close the body tag. In the style tag of the head, first, we will declare the class of the first div ‘container’. The heading of the container class is accessed by the class name of the outer div.

Font color and font size are applied to the heading. Similarly, the paragraph is also applied by the CSS having the same font size and color properties. When it comes to the class description for the inner div, we always use the outer div class along with the inner div class and then the elements inside the div. This is to access the HTML content properly. We cannot directly access the class inside the div by its name only, just like the parent-child class in inheritance. First, we write the parent class name and then the child class. In this way, any ambiguity regarding several parents and more than one child’s classes will be removed. 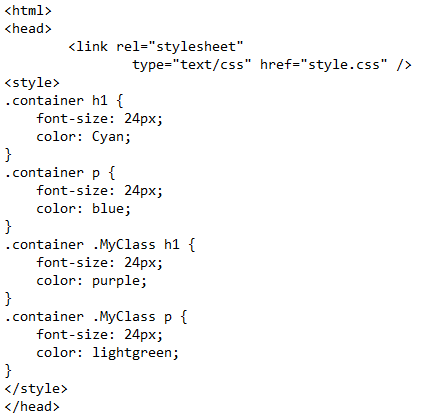 Close all the opened tags and save the code in the text editor file as an html extension. This extension will allow the web page to be displayed in the browser. 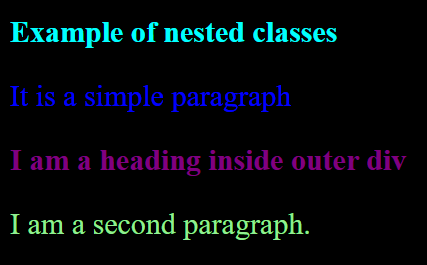 On the execution, you will see that a black back-grounded web page will be created with all the headings and paragraphs with the same alignment and hierarchy as they were declared with all the CSS effects. This is because the style sheet contains the CSS property of the class in the same sequence as the classes defined in the HTML tags.

This example is about the use of a list in the HTML code. The same div with a class container is used as an outer div for the nested classes. A simple heading and paragraph tags are used for the contents of the outer div. After that, an inner div is declared with the same class. This div contains HTML unordered list with it. 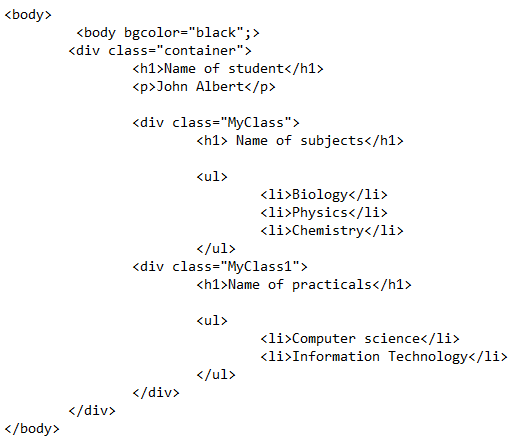 After this div, another div inside the second div is used to create nested classes. This div contains a different class name to get identified properly.

Inside this div, we have used a heading and an unordered list. Now, let us see the CSS section. All the classes and properties are declared in the same way as we did in the past example. Only the addition is the class of the innermost or the 3rd div.

Save the code and execute the file. 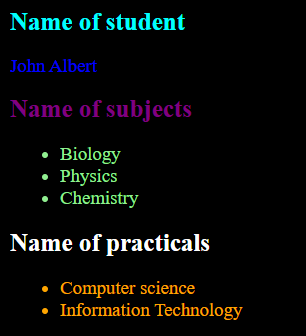 You will see that each div and its elements are applied with the effects we provided in the CSS classes.

CSS nested classes is an approach to hierarchically declare classes causing the outer and inner phenomenon of the tags. Make sure that the HTML tags on which we are to implement CSS nested classes are of the same type, for instance, a heading. If a hierarchy of the class declaration is changed or the sequence is disturbed, then it will be hard to apply the CSS properties to the HTML contents in a nested class. We have elaborated on this topic by using two examples, one with a single inner content, whereas the second example contains two inner HTML contents.