To apply the initial and external CSS types, we use the two basic approaches. These include the id and class. Id and class are declared inside the style tags <style> either they are declared in the head section or outside the file in another text file with a CSS extension. A class contains a dot(.) symbol. For example, “.sample” is the name of a class. Inside the class, we can write several properties that we want to be applied to the HTML contents. That is the reason that the developers prefer the internal or external styling on inline CSS because we can apply more than one effect at a time on the different HTML contents rather than writing each effect separately inside the HTML tag. Inline CSS is preferable when a single property value is to be applied to the HTML tag.

<style>
.sample {
Property: value; // the value can be in pixels or percentages as well.
}
<style>

Suppose we want to create a paragraph and apply the effects of this class, we write the name inside the paragraph tag.

What Is the Concept of Multiple Classes in CSS?

In this way, we can declare as many classes as we want. But the application lies only by using the specified class name inside the tag. If you want to apply the effect that is present in class 1 and class 3, we use the names of both the classes.

Now, we will include some examples to elaborate on this concept.

In a simple HTML code, inside the body section, we first declare a heading <h1>. After that, two paragraphs are used. Both of them used a different class names. The first one is with both classes one and two.

And the second paragraph tag contains the name of a single class that is one.

After that, the HTML body tag is closed. 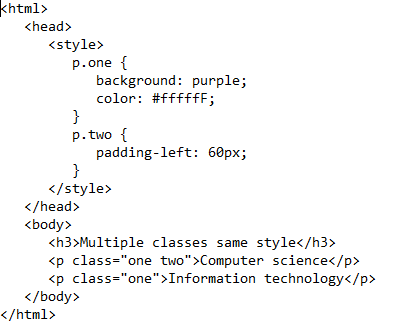 A color code is used that is for the white color. Similarly, the second class will also be explained.

After that, close the style tag and the head section. By doing this, you will be able to execute the text as a web page in the editor.

This change in effects is because of the difference in the use of the class. As the first paragraph contains both the class name, the background color and the padding effect are applied. The second class only has the first class name, so it is affected only by that background property written in the class one.

Now, we apply this multiple class effect to the div containers. Consider the body section of the HTML. Inside the body, a heading is used. After that, three divs are declared. Each time, we use the different class names inside the tags. The first div contains the class one only. The second div is accompanied by the class names of one and two. And the third class contains one and three. It means that one class is written in all three divs.

Add the text inside the div and close all the opened tags. Inside the head section, a style tag is used and all the three classes are declared. The class “one” contains the background color, the font color width, and the height of the div. As we have seen that all the three divs used this class, it means that these effects are applied to all of them by having the same height and width.

The rest of the two classes, two and three, have two properties. 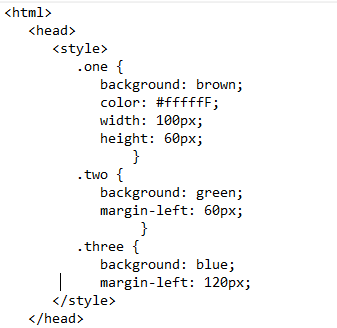 Save the whole code and execute the file in the browser. 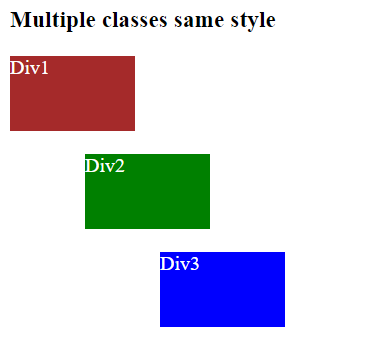 Upon execution, you will see that all the three divs are of the same height and width. The first div is not shifted from the left; this is because the “one” class has no margin property. The second and third divs are displaced because they both used the one class as an additional with them. Furthermore, one thing is questionable: as the second and third divs implemented the one class and the second third, why is the color of the “one” div not applied to both?

This is because CSS has an overlapping effect capacity. If two same properties are applied in different classes, the effect that is applied later is implemented.