A flexbox or item is used to contain HTML contents in it. A CSS flex property is used to apply the effects of flexible lengths on flexible items. A cascading style sheet offers the property of order used to arrange the flex items. To apply the order property, the items inside the flexbox should be flexible. Otherwise, the property will not be affected.

In this example, we have used a simple div to add further divs inside it, creating a nesting div phenomenon. The outer div is known as a flexbox to several contents inside it. Their outer div is the main div that carries several divs inside it. It is declared with a CSS class to apply some CSS effects on it. This class is described in the head section with the style tag by forming an internal CSS.

Inside the div, four more divs are declared. Each div referred to the single flex. We will add inline styling here to add color to each flex. Each div is also further entertained with the CSS ids. These all ids are responsible for applying all effects on the flex that are arranged in an appropriate order.

At this point, it is necessary to elaborate on these two terminologies of CSS. As we discuss the CSS properties being affected, these ids and classes play an essential role in applying any effect on the HTML contents. Whenever we talk about internal and external CSS, we come across ids and classes. These ids and classes have the color, text style, dimensions, and many other effects on contents declared in the body section. To access these effects from the classes and ids, we need to mention they’re named in the content tag, just like the “one” id. And all the ids from first to fourth are also declared.

Coming back to the HTML code, here with each internal div or flex, we have also used the text that will show the order more clearly. This occurs when the sentence is formed by arranging the flex in the appropriate order. The order direction of the flex is the user’s choice. We can number the flex randomly. These flexboxes are formed when the CSS styling is applied to them. Now, let us consider the CSS code.

We will first declare the id that belongs to the outer div inside the style tag. This div will specify the area in which all inner divs are formed. We will add width, height, and border properties to this id. An important feature that is used to form a flex is the “display” effect. Because this property is removed, simple rectangles will be formed on the web page. These flexes will be formed by using this display property: 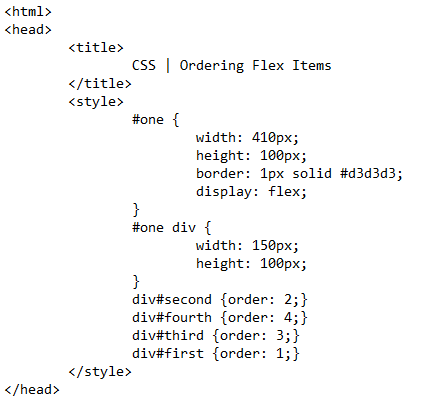 Flex is usually formed in a horizontal direction from left to right. Alright, this was for the outer div. To add dimensions to all the inner div or flex, we will use the id “one” with div. These properties include the width and height of a single block or flex. The height of the single inner div is equal to the height of the outer div. Whereas the width of the outer div is divided into all four inner divs. This is done by declaring the id description re-accessed by each flex inside the tag with the different id names for each flex. Each div name is given according to the order. For instance, the first div contains the order as 1. It does not matter in which order you declare the code in CSS or HTML, but the order number will decide the order of each flex.

Close all the tags. Now, save the code with the HTML extension to open it as text and a webpage.

With flexbox and flex creation, it is visible that there is no need to mention any flex flow in the code. By default, the flex flow is in a horizontal direction, and the order is followed in the same way as it is described, that is by default ascending order. But, once you have declared the order of flex in the flex creation, you can reverse it by mentioning the direction of the flex.

This property is added to the flexbox or the outer div as it is responsible for containing inner flexes inside it. And if you want to use the default order, remove this direction property completely or add the flex-direction as “row”. It will make the ascending order again.

On the execution, you will see that all the order of flex is reversed, you can see clearly through the colors of flex, and the sentence text is reversed accordingly.

As we have described previously the direction of flex is not described. By default, it is in the horizontal direction having a single column and multiple rows. But, to make a vertical flex, then the direction of the flexbox is changed from the row to columns.

By using this feature, a vertical flexbox will be formed, having all the flex div intact, and the order of all the flex will be the same. 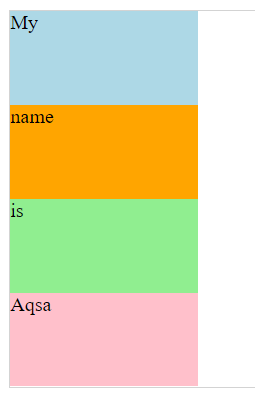 The flexbox can be reordered by specifying any flex inside the box to come at the first position. We have chosen the 3rd one that is given an order of -1, The text color is changed from black to red, and the size is also increased to discriminate it from others. 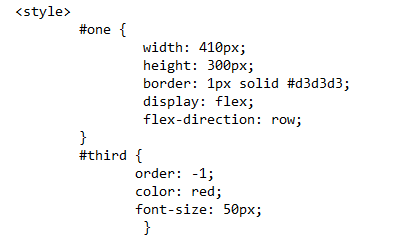 This third flex will be removed from the order list. By doing this, the order will not be maintained. The box that will come to the first position will disturb the order of the whole div.

On the execution, you will see that the first block is moved toward the right to form a place for the 3rd block. This way, we can reorder the flexbox by specifying any one flex.

In this article, we tried to describe the CSS flex order property by creating a flexbox and flex contents inside it. The flex order is applied by adding colors and text to the flex showing that the order we have mentioned is maintained. Furthermore, we can reverse the order by mentioning the flex-direction flow in reversed order. The horizontal direction is the default direction of the flex; it can also be changed in the vertical direction by changing the row direction in the column. All these effects are explained by using specified codes to explain the concept of flex order.