Syntax of “Ternary Operator” in C#

The syntax of the ternary operator is below here:

Now, we have different examples here in this article to understand the working of this ternary operator. Let’s have a look at these examples, how it will check the condition and will display the statement for true or false results of the condition.

In this given example, we have a simple code to understand the working of the ternary operator in C# programming in Ubuntu 20.04.

In this code, first, we have “using System”. It’s a mandatory part of the C# program. We import this library to get access to the functions and methods we use in this C# program. Also, we have a namespace “Program”. We created a class named “Ternary”. Inside this class, we invoked a function which is the “main” function of the C# code “static void Main(string[] args)”. For representing the arguments of this function, (string[] args) is used. In this main function, we declare and initialize two integers, “int a” and “int b”, and assign values “17 and 25”, respectively. After this, we have declared a variable named “comparison” with the “string” data type.

In this output, we see that it prints “b is greater than a” as we assign “17” to “a” and “25” to b. The ternary operator checks both values and displays the result on the screen.

Here, we have a code in which we get the input data from the user and then use these users’ input in a ternary operator and display the true result. 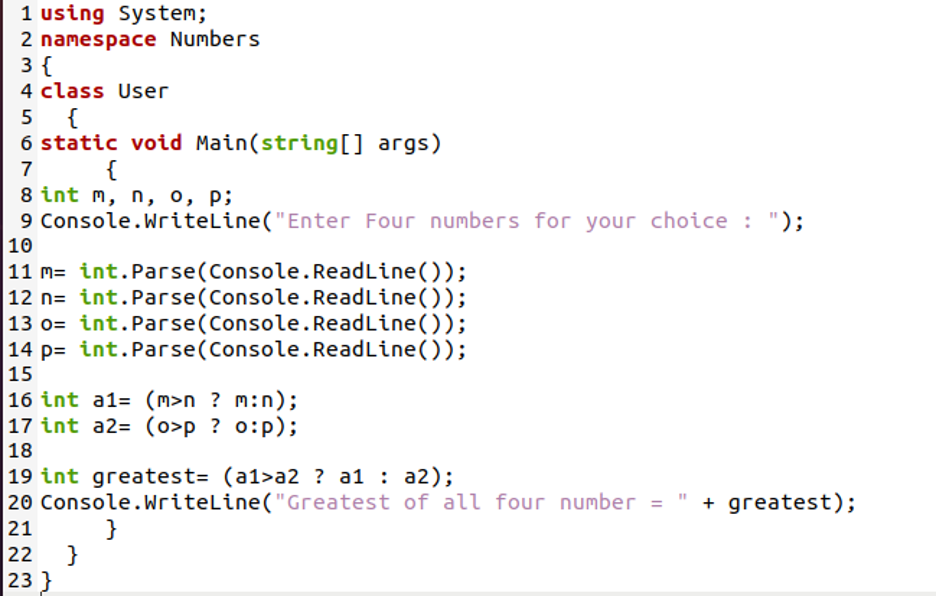 We have “using System” in the above code, which we discussed in our previous code. Now, we are using the namespace as “Numbers”. After this, we created a class with the name “User”, and inside the class, we have the “main” function. We have discussed all these in the above example. Now, we move to the next line of code in which we declare four variables with the integer data type. We get all these integer values to form the user and get input from the user.

Before the user input, we print a line on the screen “Enter Four Numbers of your choice:” with the help of “Console.WriteLine()”. When this line renders on the screen, the user will know that he/she has to input four numbers. We assign the first user input to “m” by using “int. Parse(Console.ReadLine())”, same as we assign the second user input to “n”, third and fourth input to “o” and “p” respectively. After this, we have declared two new integers named “a1” and “a2” and have two conditional statements. We assign the conditional statement “(m>n? m:n)” to “a1” and “(o>p? o”p) to “a2”.

We show the output of this code in Ubuntu 20.04 terminal in this given image.

This output shows that it prints the line first so that the user enters four numbers. After this, when the user enters the numbers, the program displays the result on the screen. As we see, in this user input, the greatest value is “99”. 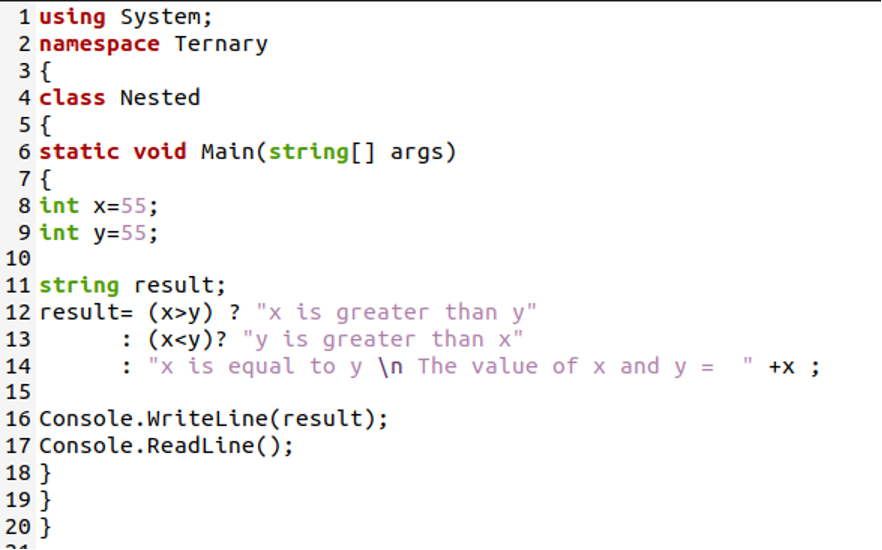 In the first line, we have “using System”. After this, we use the namespace as “Ternary” and a class named “Nested”. Also, it invoked a “main” function in this class. Inside this “main” function, we have declared and initialized two integers named “x” and “y” and assigned “55” to both of them. Then, we declare “result” as a string data type. The variable “result” contains the nested ternary operator in which the first condition is checked, which is “(x>y)” if the condition is true, then the statement on the left side will be executed; otherwise, it moves to the right side of “:”, where we have another ternary operator.

The output of this above code is here in this image. We get the output using the same commands as in the above examples; just the filename is different.