Difference between if-else and switch statement

We can add the number of cases according to the condition. A break statement is used to terminate the program after the condition has been met in the specified case.

As discussed earlier, the switch statement provides several options for the execution of source code; similarly, we have provided an integer number, and the switch statement will shift to the case according to the given number. Firstly, a system library is used to implement the code; it includes all the system features required for the C sharp programming language to execute.

After providing a library, we create a public class in the program, as C sharp follows the approach of object-oriented programming. Then inside the main program, an integer variable is assigned by a number. We have used three cases; the given number will get switched according to the number. As we have used 7 numbers, the control first goes to case 1; as it is not true, it will continue and switch to the second case; it gets matched so that the statement will be displayed, and the break statement will be applied. We have displayed a message in the default portion in case the number does not lie in the given cases. The ‘default’ part of the switch statement acts as the ‘else’ part of the ‘if-else statement. 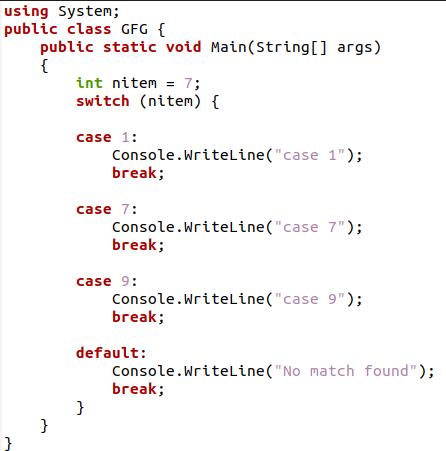 Save the code of the text editor with the ‘.cs’ extension. To implement the c sharp code in the Linux operating system, we need first to install mono, an open-source implementation of the .NET framework. A compiler is always required for the compilation, so MCS plays the role, and later mono executes the file by having the ‘.exe’ extension.

The execution will display the case 7 messages.

For the implementation of the switch statement, there could be many possibilities as there exist many operational examples. One of the simple ways is to check a specified alphabet if it is a vowel or not. Inside the main program, a character variable is declared that will store the value entered by the user. A message will be displayed at the console when the program is executed.

The entered word is converted into character; if it is not, this function contains the readline() function as a parameter to get the value.

To.lower() function is a built-in function that takes the character argument and returns the value in the lower case version of that character. 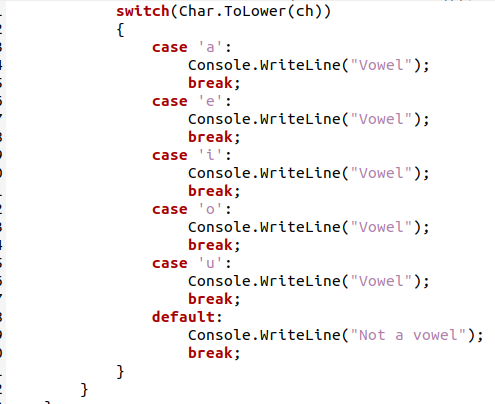 Now execute the program to see the working of the switch statement regarding vowels. When the program runs, the user will get a message to enter the value. He will enter an alphabet; the system will check if it is in upper case, then first, it will be converted. In the example, the user has entered ‘h,’ the system will go case by case in the switch statement, and it is not a vowel so the default part will get executed.

Consider the previous example. In the switch statement, all the vowels are written collectively following different cases. In the previous declaration, each case follows the break statement separately, but here we have written a single output statement and the break statement. This causes a reduction in space, and the code is mode easy to understand; moreover, the compiler needs less time to compile and execute the code efficiently. This approach is feasible and applied in situations where more than one case has to do some work or display the same output. For instance, this example contains the same output values, so we have applied it in the code. Sample syntax is described below. 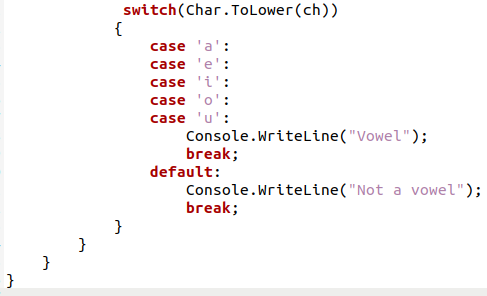 The lower example will contain an integer number. This number will get switched and move towards any case we have declared. Each case will display greetings depending on the case we select. The first case will display the message, and then the goto statement will jump towards default, so if a person selects 1 case, both 1 and default values will be displayed. Moving towards case 2, a message will be displayed, and then the goto statement will jump to case 3. So with case 2, case 3 will be displayed too. Whereas case 3 contains a jump statement for default too.

Here case 3 is a labeled location. 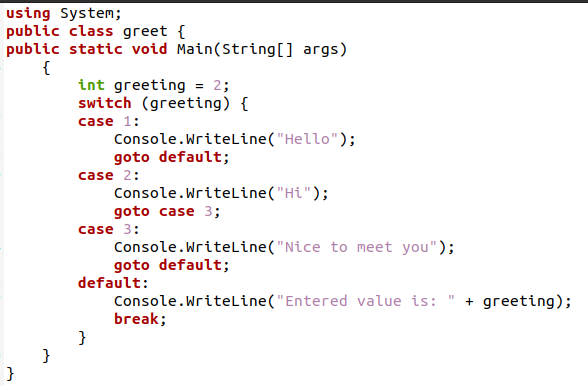 The switch statement in C sharp is implemented the same way as we use it in other programming languages. We provide the value passed through each case to meet the requirement. The switch statement is preferred over the if-else statement as it provides more options and is used for the absolute results. We implemented c sharp examples in Ubuntu 20.04 using mono and MCS compilers for the execution.