Methods to Convert the String to the Byte Array in C# Programming:

Here, we have two methods to convert the string to byte array:

GetByte() method: By using this method, we are converting our string data into byte array data in this guide.

Now, we will explain both methods with the help of examples in C# in Ubuntu 20.04 so that it is easy to understand this concept. Have a look at the examples, which are given below:

We have an example in which we are using the GetByte() method to convert our string data into byte array in C# programming. We are performing the given examples in Ubuntu 20.04. First, we have to create a file in Ubuntu 20.04 text editor with a filename having an extension of “.cs”. Then, write the given code in this file of Ubuntu 20.04 and save it. You may use any text editor of your choice on which you want to run your program. 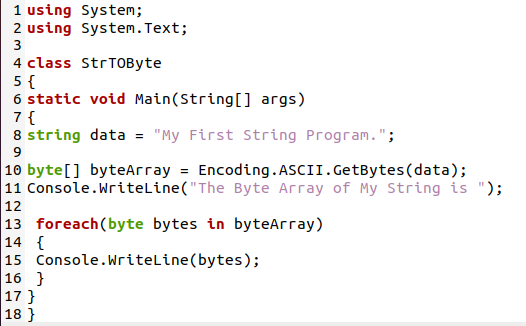 In the first line of this code, we have “using System”, a library for accessing functions and methods in C# programming. Any method and function required in this code can be accessed using this “using System” library. In the next line, we are using “System.Text”. The “System.Text” is a namespace containing different classes. These classes represent ASCII and Unicode char encodings.

It may contain an abstract class and also a helper class. Now, we are declaring a class with the name “StrToByte” in this code. After this class, we invoked a “main” function which is static here. The “static void Main(String[] args)” is the main method of this C# program. The command line values are in this “string[ ] args”. It is a variable. We can also use only “string[ ]” in our code, but for our ease, we use “args” with it. We declare and initialize a variable named “data” with “string” data type and assigning string data to this variable which is “My First String Program”.

Now, we will convert our string data to Byte Array using the GetByte() method. We have “byte[ ] byteArray = Encoding.ASCII.GetBytes(data)”. In this statement, we have a byte array with the name “byteArray” and invoke a method of GetByte() here. It gets the string data and then converts this string data into bytes and stores it in this byte array. Next, we have “Console.WriteLine” which we use when we want to display something on the screen. Here, we are displaying a line using this “Console.WriteLine”. We are using the “foreach” loop, which gets the “bytes” present in “byteArray” and prints these Bytes Array by using “Console.WriteLine”.

Now, for displaying the result of the previous code, we run two commands on the terminal of Ubuntu 20.04. One is the “MCS” command having a filename with the extension of “.cs”. It is a compiler that compiles our C# code, and then, for execution, we have a “mono” command with the same filename. But this time, we use the “.exe” file extension. The output of this code is found in the following image: 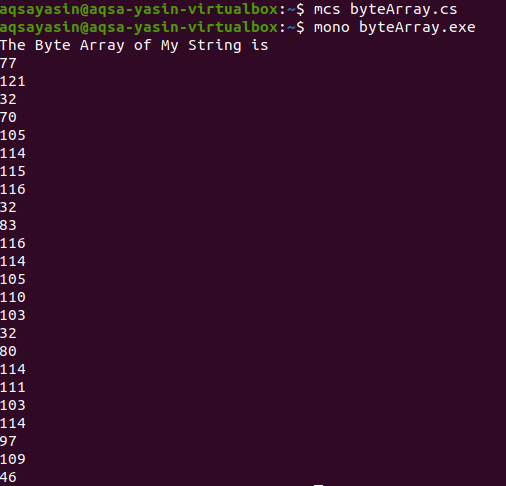 Here, you see that it prints the line, then converts all the characters present in the given string into their byte codes with the help of the GetByte() method, and displays each character byte code in a separate line.

We have another example in which we are using the second method that is “ToGet()” method. It works the same as the “GetByte()” method. Let’s see how we convert the string into a byte array with the help of the “ToGet()” method in the following C# program: 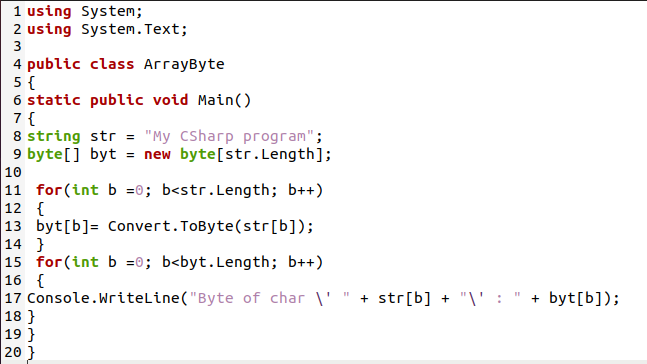 In this code, we use the “using System” statement for getting the methods and functions of this code. Then, we have a namespace “using System.text”, which we discussed in detail in the previous code. We have a public class here with the name “ArrayByte”. Inside this class, we invoked a function. This is the “Main” function of our C# program. Then, we declare a string named “str” and store string data in this string variable “str”. After that, we create a byte array of the same string length stored in “string str”.

The name of this byte array is “byt”, which is used to store the byte data of the given string in it. Now, we are using the “for” loop here, so that it will get all the string characters and convert them into bytes and store them in it. This loop executes until “b” is less than “str.Length”. The value of “b” will increment each time the loop executes and convert each character into bytes with the help of the “Convert.ToByte(str[b])” statement. Plus, it stores these byte values in the “byt[b]” array. When it converts all the string characters and stores them in a byte array, it comes out from this “for” loop and moves to the next statement when the condition becomes false.

After this “for” loop, we have another “for” loop, which is used to print all the bytes of the characters. This “for” loop is the same as the previous for “loop”, but this time, we are printing the bytes array with the help of “Console.WriteLine”. The “Console.WriteLine” first prints the line “Byte of char” and then gets the character from the string by using “str[b]”. After this, it will display the byte code of this character which is stored in the bytes array with the help of “byt[b]”. Now, you can easily understand the last line of code. The output of this code is shown in the following image. See how this code works and provides the output. 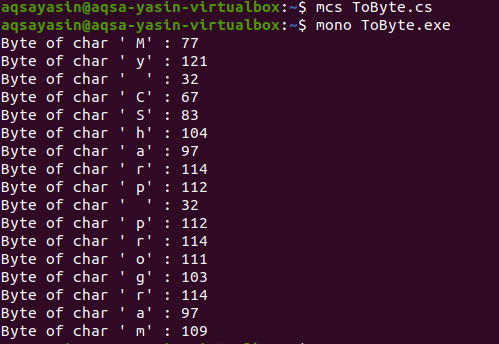 This guide teaches the string to byte array conversion in C# programming in Ubuntu 20.04. We try our best to explain all the concepts and methods used in these codes of the C# program in detail so that you can easily get the point of how to convert the string into a byte array using “GetByte()” and “ToByte()” methods. We demonstrate two examples in this guide that provide a better understanding of this concept. In this conversion, you may lose some data if you are using those characters not in ASCII code. We hope you found this article helpful. Check the other Linux Hint articles for more tips and tutorials.