The readonly keyword’s syntax for defining read-only fields in the c# programming language is as follows:

How to utilize the readonly modifier in C# in Ubuntu 20.04

To understand the fundamental role of the readonly modifier in the C#, we have some examples of code implementation and execution below:

Example 1: Using the readonly modifier to create read-only fields in C# in Ubuntu 20.04

In the following c# code example, we have declared and initialized read-only fields with the read-only modifier. 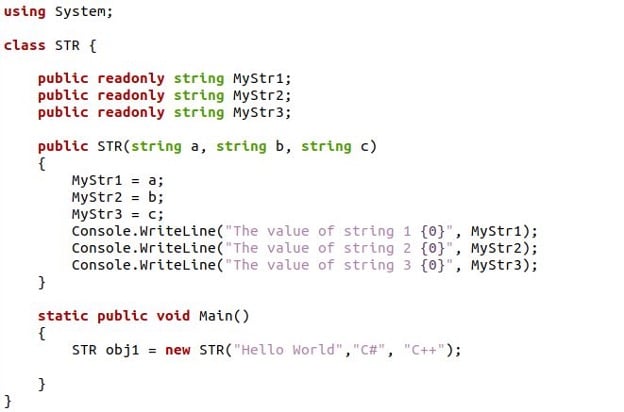 We have included the system library of C# as a “using the system” to access the required method and function. The class is created with the name “STR”. In the class, we have three read-only keywords which are kept public. The readonly keyword is used for the variables and the data type of these read-only variables is set as “string”. Then we have generated a constructor of the class “STR” in which the read-only variables have their values assigned to them.

The output displays the string values of specified read-only variables respectively in the image below.

Example 2: Using the readonly modifier to create a read-only structure in C# in Ubuntu 20.04 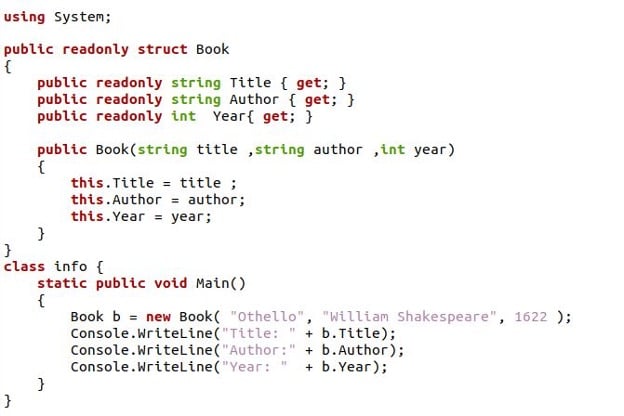 Upon execution of the above C# program, we have the output shown on the Ubuntu console screen.

Example 3: Using the readonly modifier to create read-only members in C# in Ubuntu 20.04 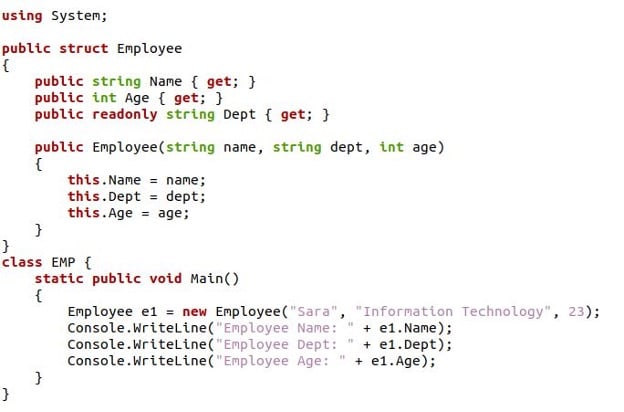 The system library of C# is imported as it is necessary for the C# program. The structure is created as an “Employee” and kept public. In the “Employee” block, we have declared the three variables. The first variable is defined as “Name” and sets its data type to string. The second variable is named “Age” which is of integer data type. The last variable is the read-only member named “Dept” which is of string data type. The getter method is invoked for these variables. Then the parameterized constructor is created for assigning the values for the above-declared variables. The defined variables are used with the “this” variable, which cannot be altered in any method other than the constructor.

After that, the class is created as “EMP” and called the main function of the class. In the main function, we have set the values for the variables and read-only members to an object “e1”. These values can be shown through the C# writeLine method.

The output of the read-only member and the other variables is clearly shown on the terminal screen.

A Static Read-only class variable’s value can be created at execution or compile time, then changed later. Nevertheless, we can only modify the state of this variable in the static function Object() { [native code] }; non-static and static functions cannot alter the value of static read-only variables. 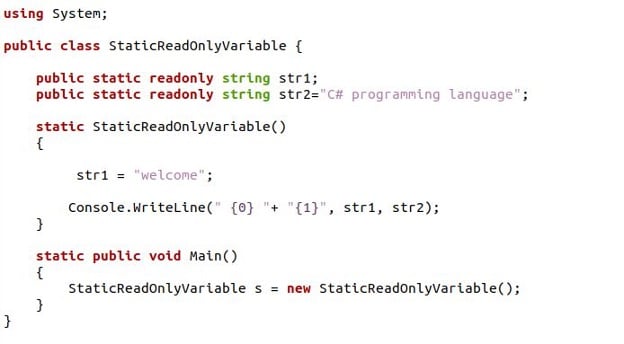 The output of the static read-only variable is displayed in the image below.