Access Modifiers are keywords in C# used to specify an accessibility level for all classes, class members, and data types. These are mostly used to prevent unintended data changes by third-party programs or classes. Access modifiers are used to protect members who aren’t ready for public use from being abused. Developers value access modifiers because they simplify reading and writing code. Of all the access modifiers, the protected access modifier is one of the most significant. In this article, we will discuss the fundamental access modifier that is a “protected” modifier. “Protected” is a keyword in C# that restricts access to members of a class.

Syntax of the Protected Modifier in C# in Ubuntu 20.04:

The previous implementation of the protected modifier is used in the C# programming language. We have to use protected keywords with the class or with the member of the class. We can only declare a class as protected in nested classes. It is not possible to specify it within a namespace. Protected access modifier can be used in three different ways in C#:

We use the keyword protected in the C# program to define a class as protected. When we want to provide parents access to their children’s properties, we usually utilize the protected keyword. Let’s get started on defining the protected keyword in C#. Take a look at the examples provided below to understand how to use the protected modifier in the other combination. For all of the executions, we utilized Ubuntu 20.04.

Example # 1: Using the Protected Access Modifier in C# in Ubuntu 20.04

We can use the protected access modifier to limit access to variables and methods to program in the same class or struct or a derived class. The protected Modifier allows classes that extend the class to access its members, regardless of the assembly. The following example uses a derived class type to access a base class’s protected members in a derived class:

The outcome of using the protected modifiers in our C# program is shown on the following screen that shows restricted access to types or members of the same or child class based on our needs:

The internal modifier specifies that access is restricted to the existing assembly in the C# programming language. Any program in the same assembly can access the type or member, but not from another assembly. 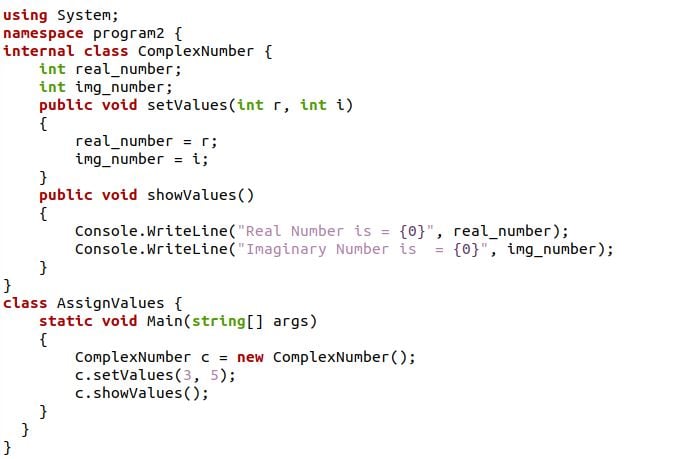 The previous program has the namespace defined as “program2” in which we have created a class “ComplexNumber” with the keyword internal. The internal class has two variable declarations as “real_number” and “img_number” of type integer. The internal class has also declared a public method as “SetValues” and created a constructor in which we have passed two objects as “r” and “i”. Then, we have another public method represented with the name “showValues”, where we have printed the variables “real_number” and “img_number”. After this, the derived class is declared as “AssignValues” within the same assembly where we instantiate the class “ComplexNumber” in object “c”. The “SetValues” and “showValues” methods are accessible in this derived class.

Upon execution of the previous C# program, we have received the following result:

The protected internal modifier restricts access to the current assembly or types inherited from the contained class. 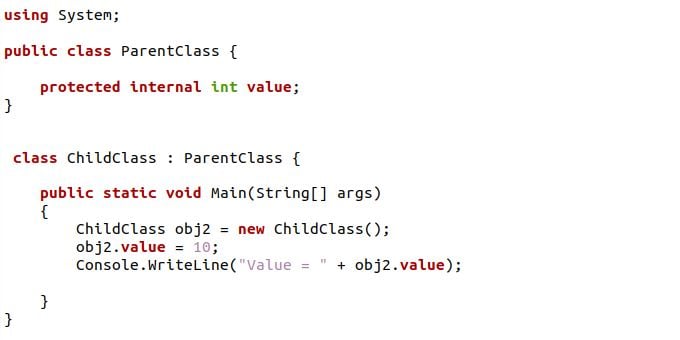 The output is shown on the following terminal screen of the previous program: 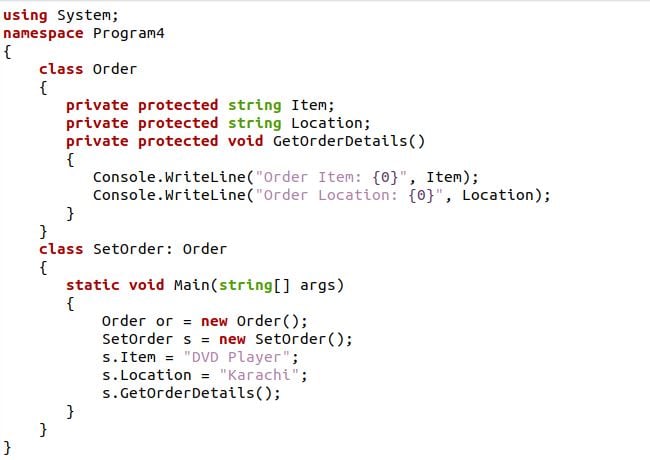 The execution of the previous program has the following results: