There is no map featured in the C# programming language. But we have an alternative Map type. However, it does provide a comprehensive Dictionary type, which we use to map objects. Maps are the concept that allows you to map a value to a key within a dictionary. As a result, we can say that a map is utilized to map the key-value pair within the dictionary. The Dictionary is a generic type, or an array, that holds data in key-value pairs. In the article, we are going to illustrate the use of a dictionary to create a key-value map.

A dictionary is a sort of collection that contains key/value pairs. Dictionary has the advantage that it is of generic type. The system library “system.Collection.Generic namespace” is used to define a term dictionary. The Dictionary in C# programming language is dynamic, which means that the size of the dictionary expands in response to demand.

The general syntax of the Dictionary in C# is given below:

The “Tkey” and “Tvalue” are type parameters that represent “Tkey” for type key and “TValue” for the type of the value in the dictionary.

Important features of the Dictionary C# in Ubuntu 20.04

How to utilize the Dictionary C# in Ubuntu 20.04

We have three ways in C# to get at the Dictionary’s key/value pair through the for loop, foreach loop, and specifying the index value. Take a look at the examples below to get a better understanding of how to use the Dictionary as a map in C#:

Let’s look at an example of a generic Dictionary<TKey, TValue> class that uses the Add() function to store elements and for-each loop to iterate them. 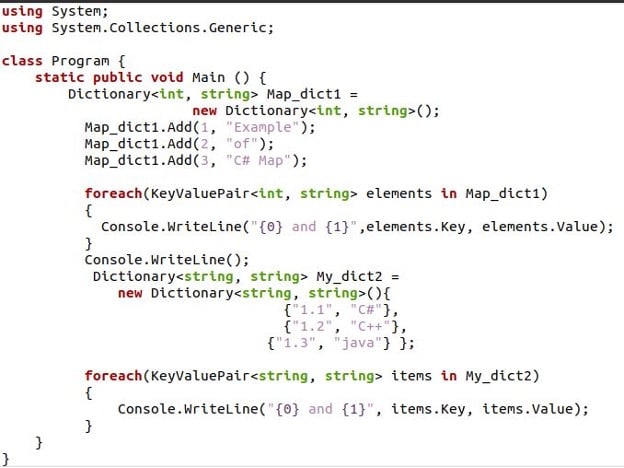 Firstly, we must import the system libraries using the keyword “using”. This is an example of a C# dictionary, so it is necessary to import the “System.Collection.Generics” library under which the dictionary term is defined. Then we created our C# class and named it “Program”. The class invoked the main method, and in the main method, we have called a “Dictionary<Tkey, TValue>” class for creating the dictionary.

The following are the result values of the dictionaries created in the above code. 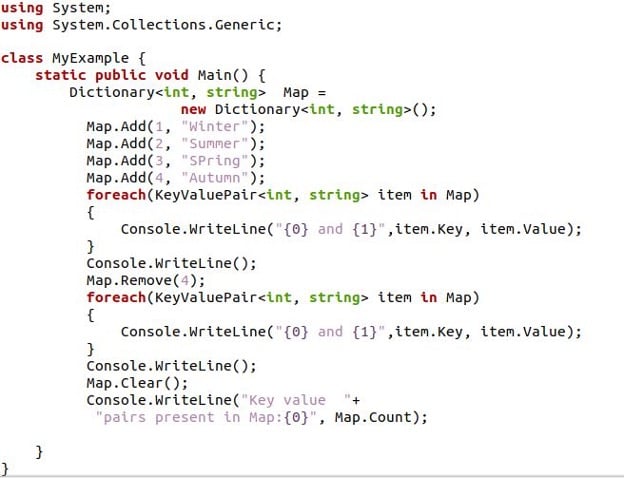 The output from the remove() method and clear() method is seen in the following image.

Example 3: Checking the availability of the elements of the Dictionary in C# in Ubuntu 20.04

We can also use a Dictionary to see if a specific key or value exists in the given dictionary through ContainsKey and ContainsValue. 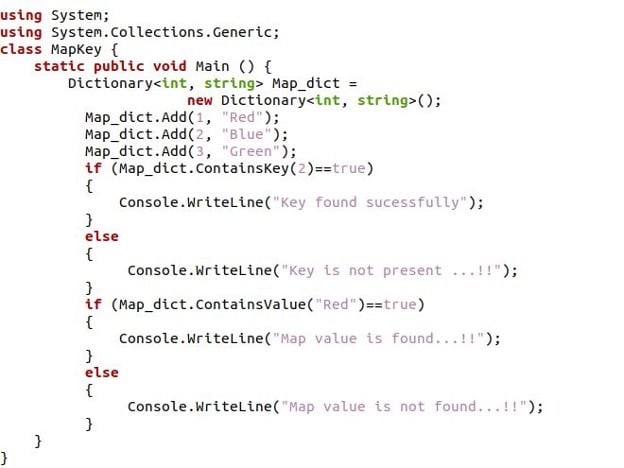 Hence, both the dictionary’s key and value are available, so the output shows the result under true conditions.

Example 4: Updating the elements in the Dictionary in C# in Ubuntu 20.04 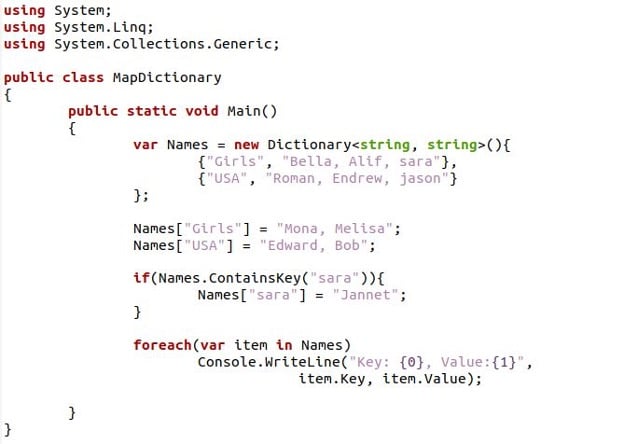 The values of the specified key index are updated on the terminal screen.

As C# has no built-in map, we used a dictionary instead. The article has given you a clear concept of dictionaries and how we can use them as a map. We’ve gone through a dictionary’s definition and some of its key features. Then, we have four examples of using a dictionary that demonstrate how to create the dictionary, access its elements, and remove and update elements in the dictionary. I hope you found this artifact beneficial in dealing with the C# map.