In the article, we will get the concept of the continue statement and how it works in the C# programming language.

How to Use the Continue Statement in C#

To understand the working of the continue statement and its usage in C#, we have some simple examples below:

We have a c# programming language example below of utilizing a continue statement with for loop. 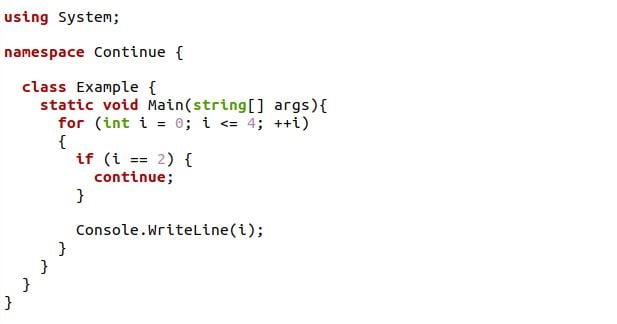 We have to import the system library first in the C# program that will allow us to access its function and method required in the program. After that, the namespace is given a name as “continue”. In the namespace block, we created the class which is represented as “Example”. The class has a main function in which we used a for-loop. We set the variable “i” to “0” in the for loop. The condition is set for the variable “i” that “i” should be greater than and equal to the value “4”.

Note that the value 2 is not executed as continue statement is used. The iteration on “2” is skipped here. The output is presented in the appended image.

The program below demonstrates how to use the continue statement in a while loop. We can immediately return control to the next iteration of the while loop in C# by preventing subsequent statements from being executed at the particular point. 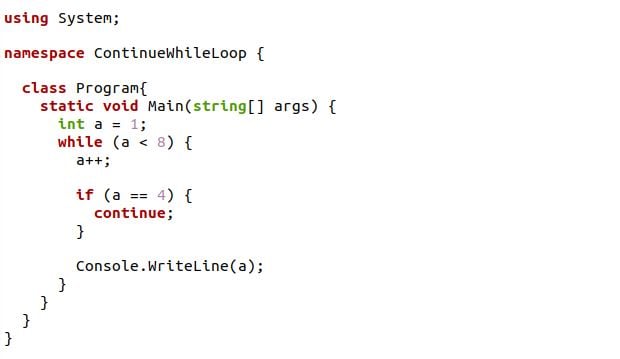 We imported the system library “using System” of C# which is required for the C# program. The namespace is given the name “ContinueWhileLoop” and in the namespace region we have a class defined and named that class “Program”. The class has a main function with a static keyword. In the void main function, we have a variable declared as “a” of integer data type and initialized with the numeric value “1”.

Upon execution of the above while loop of the continue statement, the output we get is shown below. 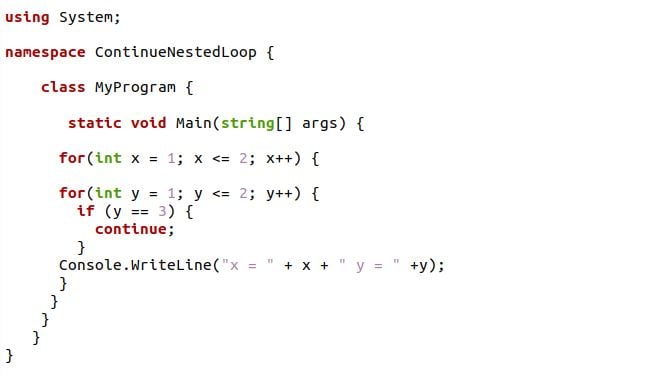 The program starts by importing the system library “using the system” of C#. The namespace keyword is used which organizes the class of the C# program and we named the namespace “ContinueNestedLoop”.Then in the block of the namespace, we have defined a class “MyProgram” and called the main function in the class. The main function has for loop with another for loop which is called a nested loop. The outer for loop has a variable “x” of int data type and the variable “x” is assigned a numeric value “1”.The condition is applied on the variable “x” that “x” should be less than or equal to “2” and then increment the value of “x”. Then we have an inner for loop in which there is a variable “y” of int data type and assigned with the numeric value “1”. The variable “y” has a condition that “y” should be less than or equal to “2”.

The value “3” of the variable “j” is ignored here. This can be displayed in the cited image below.

The Continue keyword can also be used with foreach C# loops. The following example skips specific loop cycles in a foreach loop. 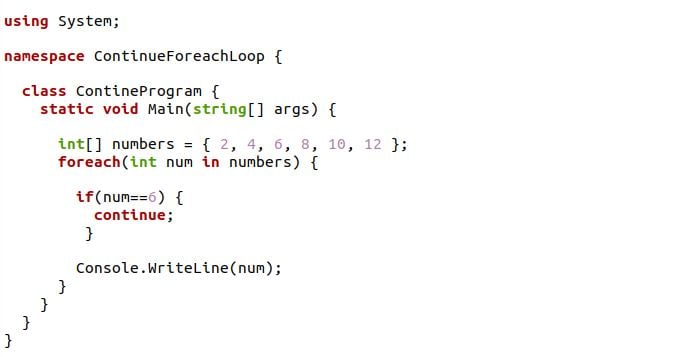 The above C# program has a class defined as “ContinueProgram” which we called the main function. In the main function, we have an array of six different values. The array is initialized in a variable “numbers” of data type int. Then we have a foreach loop that will print the elements of an initialized array.

From C# program execution above, the results are as follows: