Virtual Reality, also termed as VR, is a popular immersive technology with many applications. Tech giants are exploring this technology, among them Google, Sony, Facebook, and Microsoft.

In virtual reality, users are fully immersed in a virtual world. This virtual world can be anything, such as a computer-generated world, or a real world recorded by 360 cameras. You could visit anywhere in the world from your bedroom or lounge: a museum, a historic place, or a park. You could even expand your immersive experience by playing games in VR. Users are required to wear headsets to enjoy VR experiences. With the headset, you can see all around in the simulated world and interact with different objects. This technology has entirely revolutionized our experience to interact with the virtual environment.

VR headsets are head-mounted devices that are connected with powerful PCs, smartphones, or gaming consoles. These are called head mount devices, also known as HMDs. Many companies are making their own VR headsets, like Oculus, Samsung, or HTC. HMDs take over your vision, just like headphones take over your sense of sound.

There are two kinds of VR headsets. In the first kind, you put your smartphone into the device, which acts as a screen. Some examples would be the Google Cardboard or the Samsung Gear VR. The second is a standalone unit that comes with sensors, like a gyroscope, and a screen built in. Examples of this type of headset would be the Oculus Rift or the HTC Vive. These devices come with a pair of lenses, an accelerometer, and a gyroscope to track your head movement and put you into the virtual world. To create the illusion of depth, the devices use a technique called Stereoscopy in VR video, in which your eyes focus on a stereoscopic video or image.

Vivid VR experiences require the creation of VR content. This article explains a variety of VR technologies and shows you how to create content for a virtual reality experience.

Fully immersive experience is gaining in popularity. Users get the most realistic experience in fully immersive simulation. In a VR experience, the user is loaded with different types of equipment, along with HMD. This equipment could be a treadmill to give you walking or running experience, or a 3D VR motion chair, used for virtual roller coaster rides. This type of VR is mostly implemented in video games.

In partially immersive VR type, users interact with a partially simulated environment. But, users still find themselves in a virtual world. To provide this experience, an “unreal” environment is created. This type can also be referred to as a mixed reality, in which real objects interact with the virtual world. This experience is mostly used for pilot or military training and educational purposes.

As explained earlier, VR videos are 360 videos. So, how do you create these videos? Well, there are several methods to generate a simulated or virtual environment. One is simply to buy a 360 camera and record your experience and share it with others. This is a simple and easy method. But, there will be no interactivity with this video. The second method is creating a virtual world using 3D graphics. This software is a 3D computer graphics tool in which designers create any virtual scene. This scene could be about anything, it could be a Jurassic World or Disney Land. The good thing about this VR type is that you can even interact with different elements in the virtual world. The best example of interactivity in VR is gaming. In VR games, you interact with different elements to progress.

VR videos are fun to watch, but at the same time, they are quite challenging to create. VR videos are most often created by highly professional and technical teams. Professional 3D art tools are required for this task. But, if you are a beginner and want to dive into this field, then there is open-source software available. All you need is a powerful machine to render your creativity and some basic knowledge of 3D space. Blender is an open-source and free 3D graphics tool.

You can follow the steps below to learn how to make a simple VR video in Blender 3D.

How to Make a VR Video

Open Blender. Click “File > New Project.” You will see the following screen appear with the default cube, camera, and light. 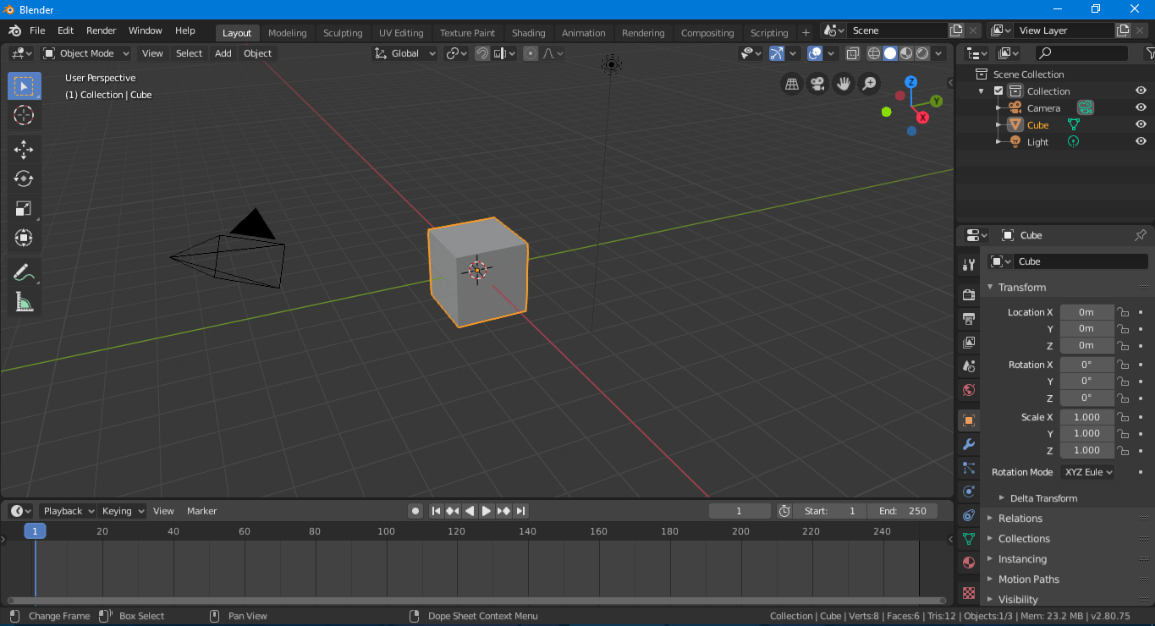 Select the cube and delete it by pressing the “Delete Key.” 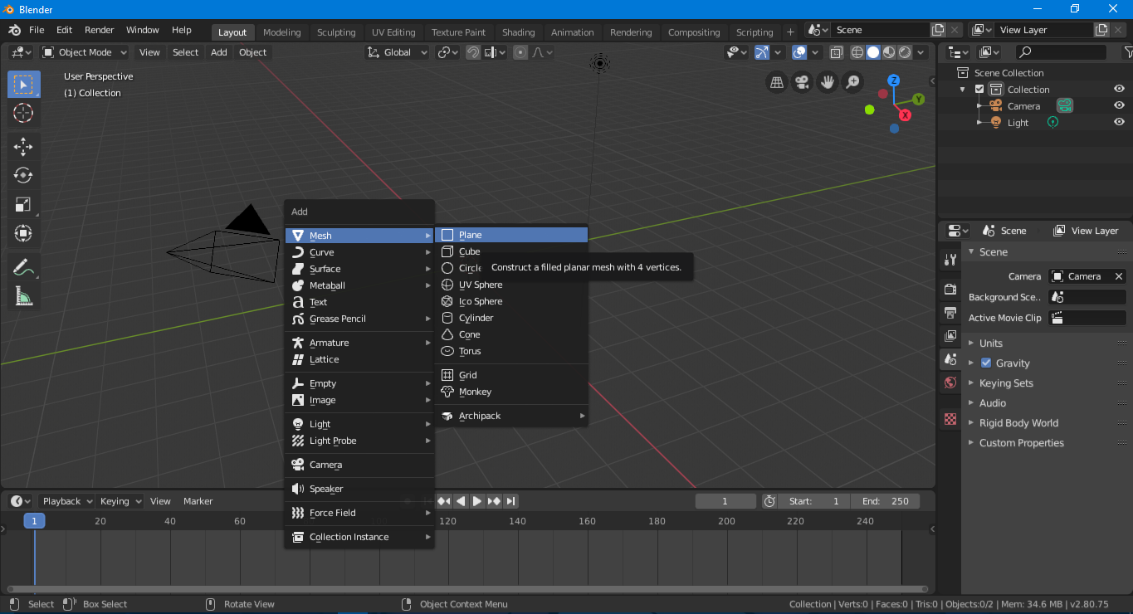 Then, add any 3D model on the plane. You can either download a free 3D model or make your own.

For demonstration purposes, I created a small room and added textures and colors to it. I then placed a light and a camera inside the room.

The following image demonstrates the external and internal view of the room and displays the position of the camera and light in the scene.

Now, we will animate the camera. I am adding a simple rotation around the Z-Axis.

To add animation, select the camera, go to the “Animation” tab, select the rotating parameter, keep the Z-Axis value to 0 degrees, right-click, and select “Insert Keyframes.” The following image highlights the process for inserting keyframes. 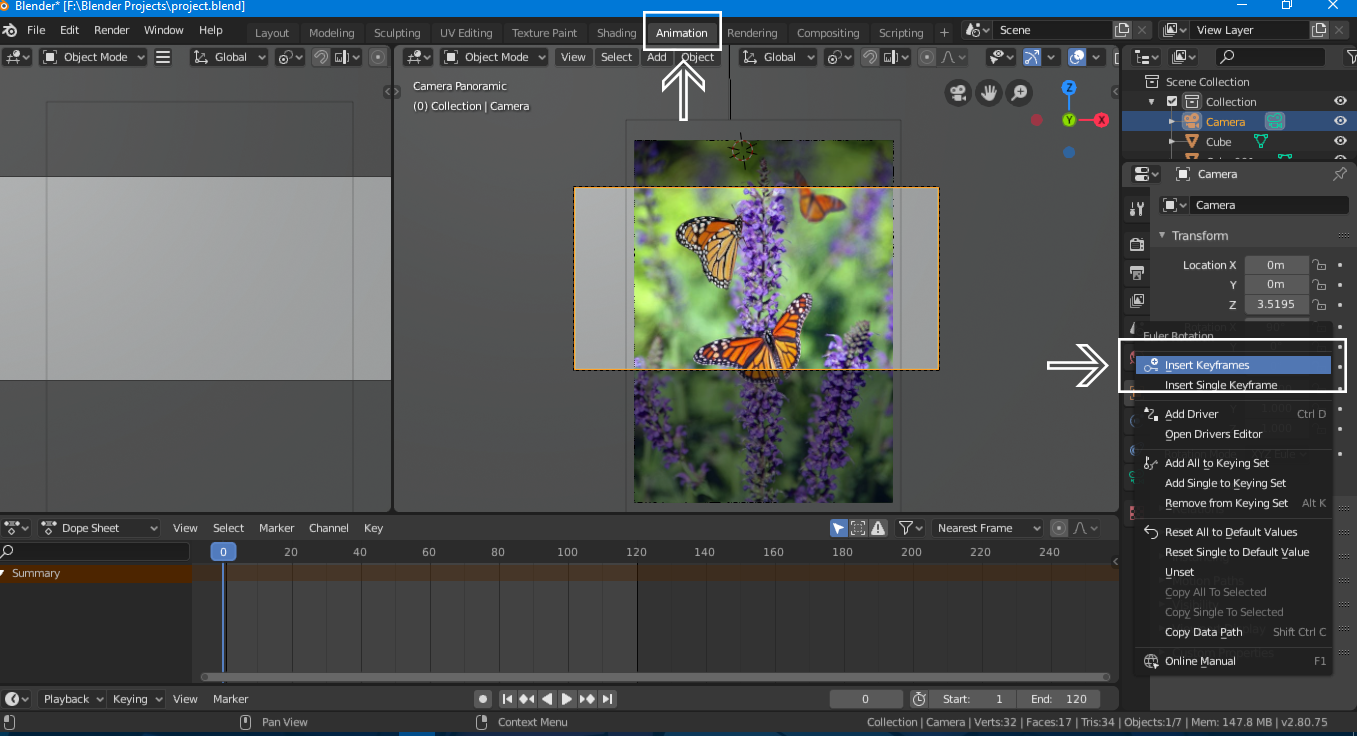 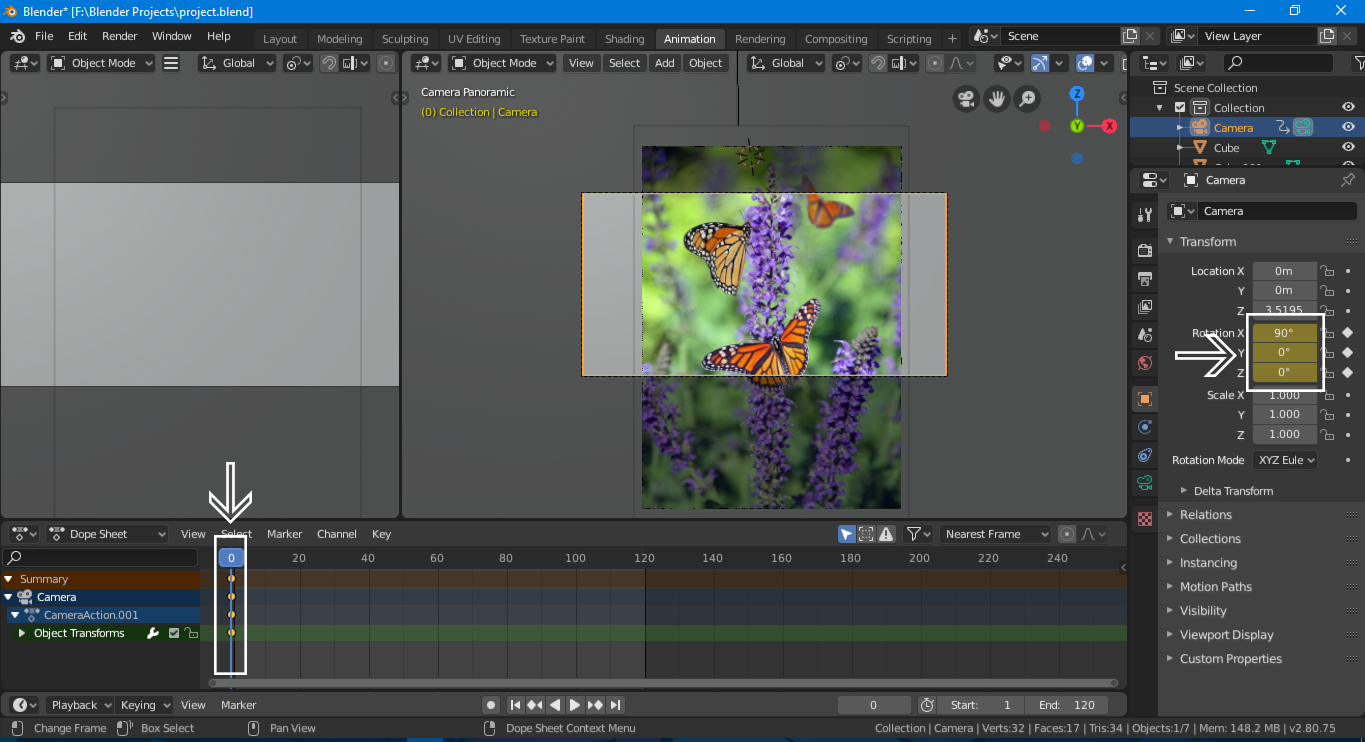 Now, grab the timeline needle to the 100th frame. We are creating an animation that lasts 100 frames. Change the Z-Axis value to any value; I will make it 360. Again, follow the same process.

Right-click and “Insert Keyframes,” and see the changes in the following image. 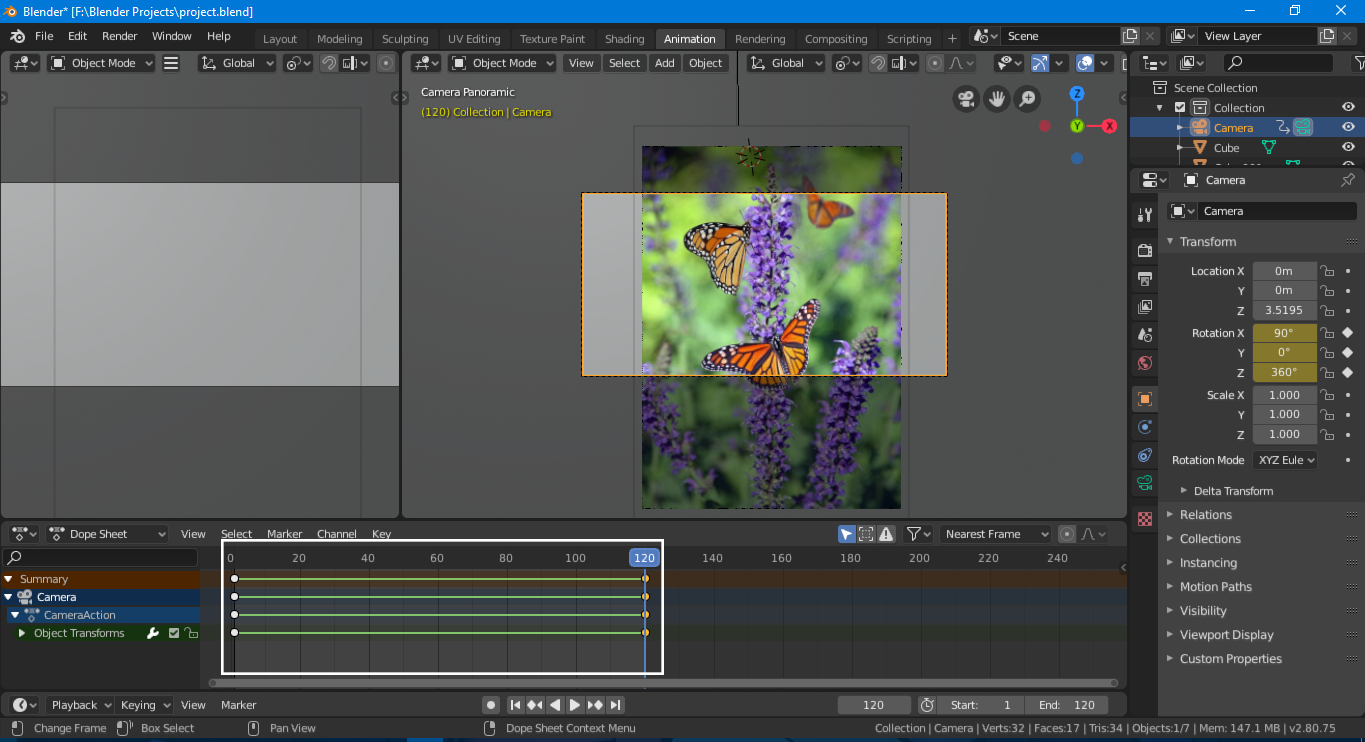 An important thing to keep in mind when making a VR video is the render setting. Blender offers two main rendering engines: “Eevee” and “Cycles.” For 360 videos, we need to set the render setting to “Cycles”. At the moment, only the “Cycles” renderer supports 360 videos. The scene settings, dimensions settings, and camera settings are shown below. 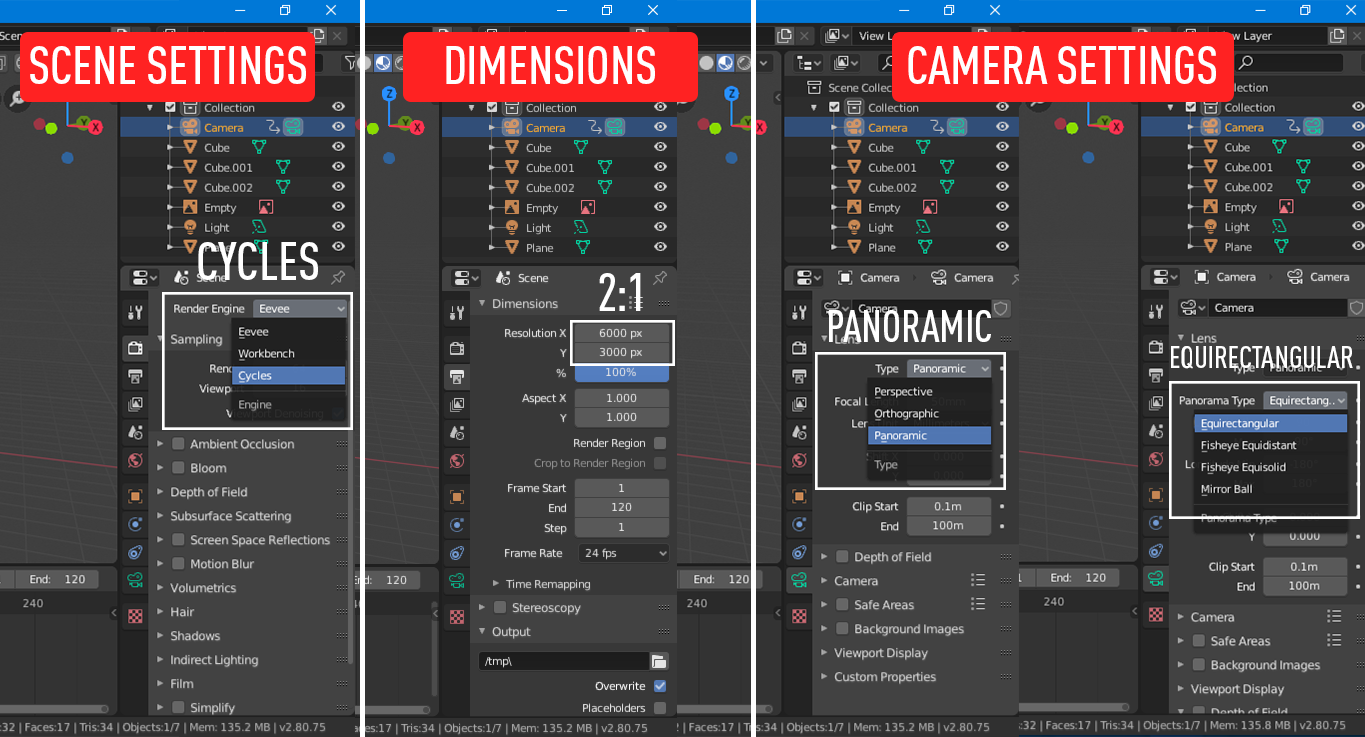 For 360 video, always set the Render Engine to “Cycles,” the Dimensions to 2:1, the Camera setting to “Panoramic,” and the Type to “Equirectangular,” as shown above.

Everything is now set up. Click “Render” and “Render Animation” or simply press “F12” to render the animation, as shown in the following image. 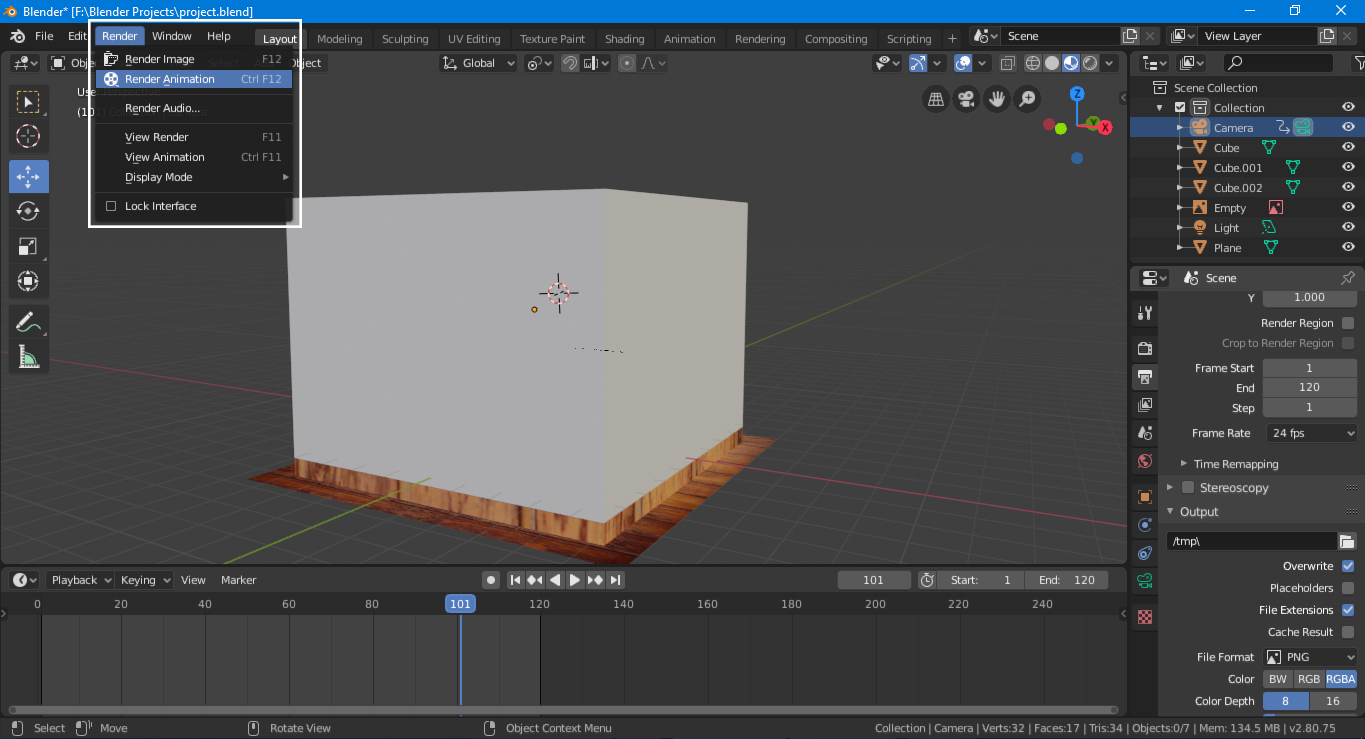 After rendering, you will get a 360 video. To upload the video to YouTube or Facebook, you will need to inject the metadata info. You can download a metatag injector from the internet. After that, your animation is ready to be uploaded to the internet.

Virtual reality is a promising technology that provides amazing immersive experiences. VR videos can be fully immersive and semi-immersive. VR content is usually created by highly professional teams. But, if you are keen to create your own VR content, then you will need 3D graphics software and a strong machine. You can achieve this by following some simple steps and using the free software called “Blender.” Nothing is impossible if you are passionate enough about it.