“A code used to accomplish a certain goal or perform a specific task is called a function. That code can be called and reused numerous times in a program. Data can be passed as input to a function, which will return results. Functions are classified into two types (in-built functions and user-defined functions). The functions stored in a programming language’s functional library and have predefined tasks to perform in that language are known as in-built functions. On the other hand, user-defined functions are created by users to perform certain tasks in the program.”

For creating the functions instreams in R programming language, we need to understand the following syntax:

Example 1: Creating a Simple Function in R
In this example, we will create a function that will help us check whether the entered value is even or odd. There is no predefined function to perform this task, so that we will create it on our own.

Let’s name the function “oe_check” we will take “x” as an argument. The value will be passed to x from outside the function. We will write the code inside the body, as shown in the example below. 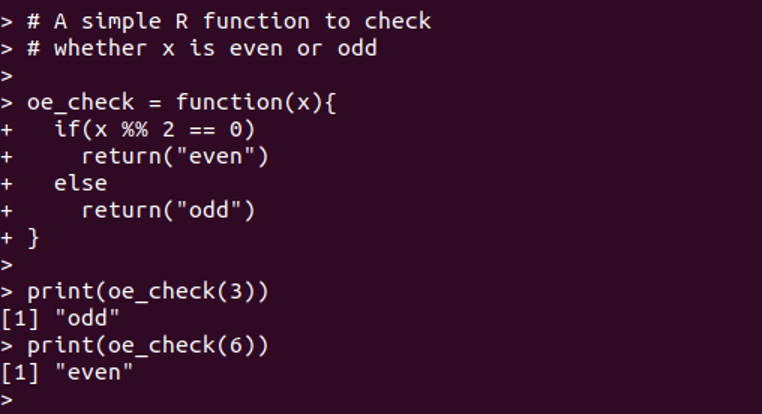 As you can see above, when we called the function and passed the value “3” as an argument. After executing the code, it generated an output of “odd.” When we passed 2 as an argument, it gave us an “even output.”

Example 2: Create Functions With Single Input and Single Output
In this example, we will create a function that will give the result as a single output by taking a single value as an argument.

We have passed a value of radius “4″ in the function, executed in the body where the formula to find the circle area is written. After executing the function, it shows us the output after calculating the area.

Example 3: Create Functions With Multiple Inputs and Multiple Outputs
In R Language, many functions accept input objects but only return one output object. However, this is not a limitation because we can create a list of multiple outputs and access them to the list element to get the output. Let’s create a function “rect,” which will take “l” and “w” as an argument and calculate the area and parameter of the field. 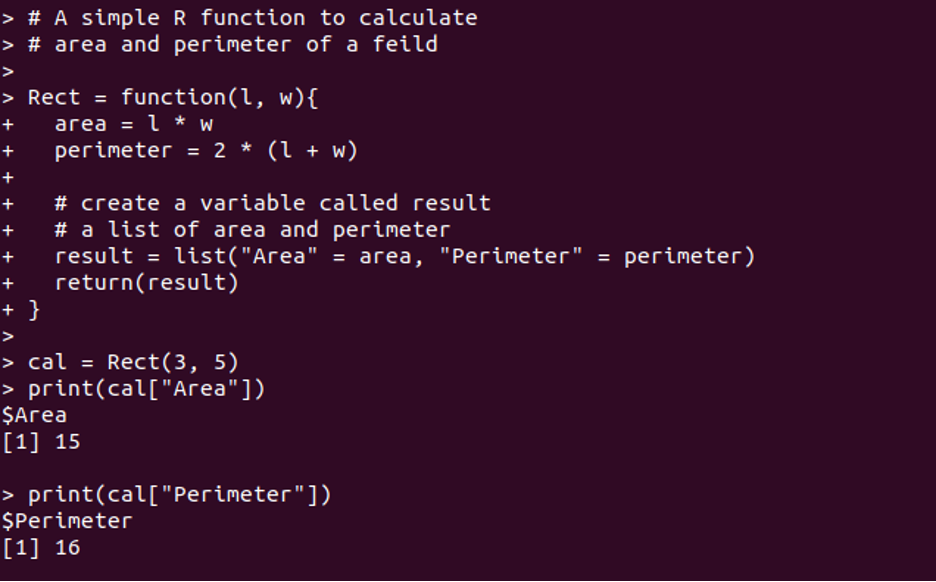 As R allows us to return a single object, we have created a list and assigned it to a variable “result.” When we pass the value to the function, the function will store the results in the list we created.

Example 4: Create Inline Functions in R
Sometimes, to save resources and improve the program’s execution, we can use the inline function. To create inline functions, we have to write the function command along with an argument. There is no need to create the body of the function; we can write the code/formula/expression just after the function’s argument.

The value will be passed to the variable “f” to which the function is assigned. It will generate the results whenever we call the function. 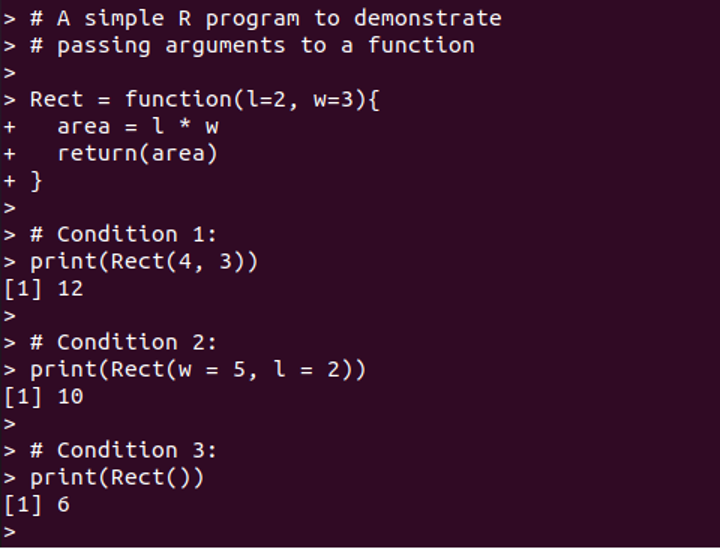 As you can see in the 3rd condition, we have not passed any argument while calling the function, so the function used the defined arguments to execute the program.

Example 6: Lazy Evaluation of the Function in R
In R, the function will continue to be executed even if some parameters are absent, as long as the execution does not include those arguments.

Let’s explain it with the following example. 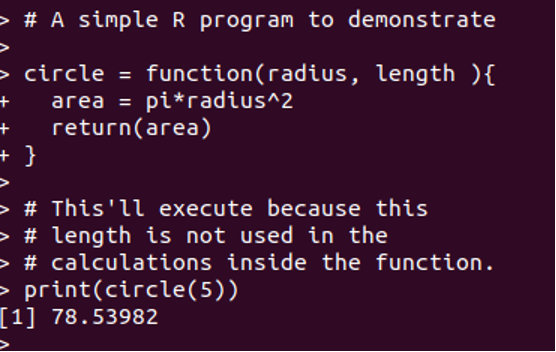