How to Create an Ext4 File System with mkfs

Ext4 is the successor to ext3 in the Linux File system family. It is compatible with the majority of Linux distributions like RedHat, Ubuntu, Fedora, etc.

Ext4 has taken over as the default file system for many Linux distributions and is now the de facto standard for Linux kernels 2.6.28 and higher.

In this article, we will see a basic overview of the Ext4 File system and how we can use it to create an Ext4 file system using mkfs?

The EXT3 filesystem was designed to address the large amounts of time required by the fsck tool to properly restore a disc structure broken by an erroneous shutdown during a file-update activity. It was brought to the mainline Linux kernel 2.4.15. The journal, which records changes to the filesystem in advance, was the single improvement to the EXT filesystem. The remaining disc structure remains unchanged from that of EXT2.

The EXT4 filesystem was introduced in 2006 and was adopted into mainline Linux kernel 2.6.28 in 2008. The Ext4 filesystem works in a similar way as that of Ext3. However, it adds support for the large filesystems, enhanced fragmentation resistance, superior performance, as well as better timestamps.

Partitions in Linux are mounted at certain points in the directory tree, making them accessible as subdirectories.

Let’s move and see how we can create an EXT4 file system using the GNU Parted tool:

Step 1. First, let us list the partition available on our system:

Or you can also use: 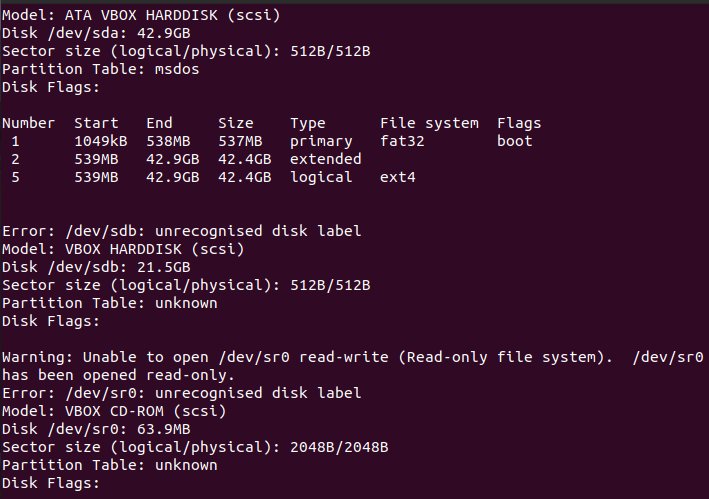 Step 2. Use the following command to modify the target disk(/dev/sdb in our case):

You will see a message similar to the one below:

Welcome to GNU Parted! Type 'help' to view a list of commands.

On this new prompt, we can use different GNU parted commands like help, mklabel, mkfs, mkpart, etc.

IMPORTANT NOTE:  GNU Parted immediately applies its modifications. With fdisk, you can revert back changes with the ‘q‘ command. This is very helpful in case you make a mistake during a partition operation. However, there is no way out with GNU Parted. As a result, you should use extreme caution when using GNU Parted.

Step 3. We will now use the ‘print’ command here to display the file system information for our target disk ‘sdb’:

In this way, we can confirm we are working on the correct disk. You can use the ‘mklabel’ command to give a label to your disk.

Step 4. Now, we will issue the ‘mkpart’ command:

This will prompt us to different values:

Here, we are using TB for the ‘terabyte’ unit. We can also use other units and formats like GB, GiB, kB, KiB, etc. Now, again run the ‘print’ command to see the details of the partition:

Step 5. Simply making partitions is not sufficient to make them functional. To utilize them, you need to first create a filesystem on the partition (this is a procedure known as “formatting” a partition). Now, exit the parted application.

We will format our partition with the mkfs utility. We can also use mke4fs for this purpose:

Here, /dev/sdb1 is the block device in our case.

In the above command, block_device is a partition that will hold the Ext4 file system to be created in the next steps.

Step 6. In this step, we will create a mount point for the file system to be mounted upon:

Now, mount the file system on the above mount point:

Verify the above steps with the ‘df’ command:

In this article, we have learned how we can create an EXT4 partition on Linux. It’s a good practice to plan how you’ll partition your hard drive before you install Linux on it. An imperfect initial partitioning design might become problematic when you’ll exhaust the space in one partition when another has plenty of available space.