A Java method contains a block of statements/instructions that perform some functionalities only when someone calls the method. When someone calls a java method, multiple statements executes at the backend to provide a certain output. The Java methods provide the reusability of the code, as we have to write/create a method once, and we can use it as many times as we want.

What is Java Method

A Java method is a block of code/statements which may or may not take some input and returns some output. A method must be declared within the class. To create a Java method we have to follow a proper syntax as described below.

The below-given snippet shows how to declare a method in Java:

A modifier/access specifier specifies the access type of a method, and java provides four types of modifiers i.e. default, public, private, and protected.

In Java, there are multiple keywords that have some special meanings, in the above snippet static keyword is used to define that the method can access the static data.

Lastly, Method’s name is the name of the method using which we can call it.

Let’s consider the below-given example to understand how to create a method in Java:

The below-snippet creates a method to find a square of a number:

Within the class “HelloWorld”, we created a method findSquare(). Scanner class is used to take the input from the user moreover functionality to find the square of the number is defined in the findSquare() method.

How to Call a Method in Java

Once a method is created we can call it and to do so, we have to write the method name followed by () as shown below:

The complete code and its output is shown in the below-given snippet: 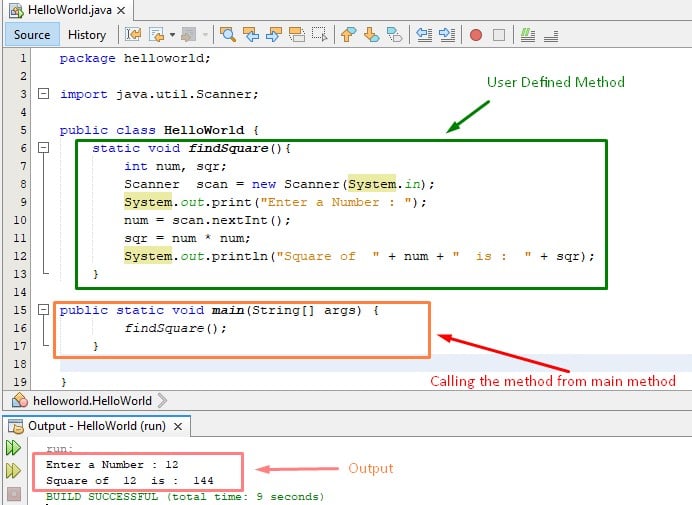