It may appear at first glimpse that returning an array from a Bash function is not realistic. Considering all the benefits, it can be useful to call multiple methods to construct arrays to split up the process of gathering all the appropriate parameters for a YAD call.

There are many reasons why one might want to restore a BASH array:

You may believe that Bash loses the capability to return function arrays. However, that is not exactly correct. It is possible to move the resultant array to a method by reference, taking cues from C/C++ developers. Such a strategy allows the method to continue to be free from references towards a global variable. The following article shows clear instances of this case.

Log into your Linux system and open the command terminal to proceed. We will create a Bash file named “script.sh” using the touch command to return the array using the Bash function. The script is as follows:

You can view the newly created file in the Home directory. Open this file and write down the appended code into it as-is. Here, we are attempting to create an associative array through an argument in a method from either a list pass.

Initially, we have created the function foo().

Inside this program, we have removed the “declare” term, which is a Bash pre-configured command that allows us to change or customize the attributes, the methods of the shell smeared to the variables, and demonstrate the values of these attributes inside the span of our shell command terminal. Moreover, it can be used to define a lengthy variable. Lastly, it is used to define the variables.

We have added the “fooval” value to the “arr” array.

The keyword “–A “is used to create the NAMEs associative array if supported. We must use the list/array as a global variable, which implies that only a method, not a script, can perform this action.

After that, in the eighth line, we have passed the “myarr” array to the Bash foo() function as a reference.

In the past, we used the “for” loop to print both the “arr” and “myarr” arrays to the foo() function.

We will now check the result of this code. Execute the Bash command to run the above code. You can see that the array has been returned to the function and then printed.

Let us look at another example of returning arrays to a function. Open your command terminal and create a new file named “openvpn.log” using the touch command, as follows:

Now, open the “openvpn.log” file, and write the following text into this file, as shown. Save this file and close it.

Again, open the command shell and create another file named “script.sh,” using the touch command to add the Bash script to the file.

Next, open the “script.sh” file and append the following code into this file as-is. Save and close this file. This script will use a method that reads values/strings from a document and returns an array:

Let us now have a detailed look at the working of this script. 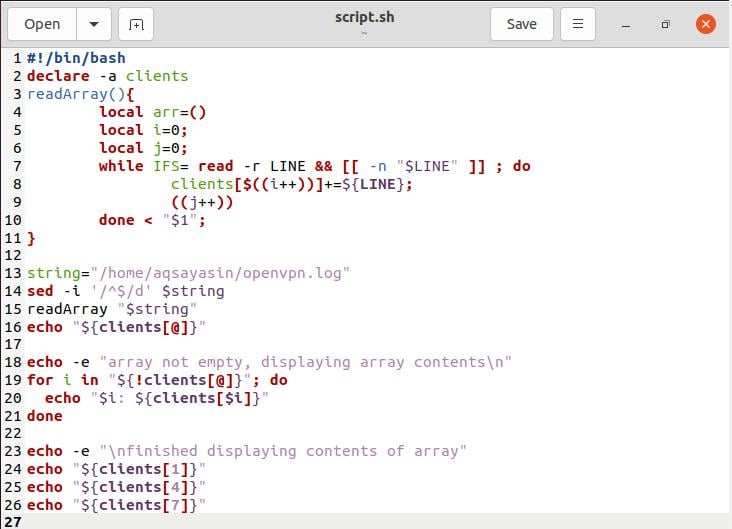 This article showed you how to return arrays (especially associative arrays) to a function using the “declare” built-in command with two examples. I hope that this article helped you to better understand this topic.