Working with any programming language requires using tuples, lists, arrays, and etc. The arrays, lists, and tuples offer the same services with slight differences. A tuple is an object that holds an order list of items. It is just like an array and a list, however, they both are mutable, but the tuple is immutable. An immutable object cannot undergo any changes during execution. The list and array can easily be modified, sliced, or indexed since they are mutable. But a tuple cannot be modified, sliced, or changed since it is an immutable object. Moreover, the list and array can only store one type of data, but a tuple can have data of multiple types. In this guide, we will discuss the main function of a tuple and how it can be used in a c++ program.

What is a Tuple in a C++ Programming Language?

A tuple in a c++ programming language is an object that holds an ordered list of items. It is an immutable data type which means the values in the tuple can’t be changed at any point of execution. The value for a tuple is given in the round () brackets separated by a comma and can be accessed by the reference of the index. There are many functions that can be performed on a tuple, i.e., get(), swap(), tuple_size(), and etc. In the further sections, we will explain the working of the 4 functions with the help of examples.

The ‘include <iostream>’ and ‘using namespace std’ libraries are included in the program to use the standard input and output functions like cin and cout. The ‘include <tuple>’ will allow the use of a tuple in the program. The complete code is provided in the main() function. A tuple ‘t’ is declared with five elements, <char, int, int, char, float>. The values for the tuple are required to follow the same order. As you can observe, (‘a’, 75, 5, ‘z’, 5.5) in the make_tuple() function are in the same order as the values declared for the tuple. After executing this code, you’ll get nothing in return indicating that the execution is successful.

Checkout the resultant output given in the screenshot below:

Note that there is nothing returned by the program. Let us print the values of the tuple.

Check out the output of this code in the screenshot given below:

The get() function prints the values in the same order as they are assigned to the tuple.

Example 3:
In this example, we’ll demonstrate the working of the tuple_size() function. With the help of a sample example, we will explain how to get the size of a tuple by using the tuple_size function. Check out the code given below.

The rest of the lines of code are the same as used in previous examples. The tuple_size function here will get the size of the tuple. The ‘decltype’ stands for the declared type used to examine the type of given expression. 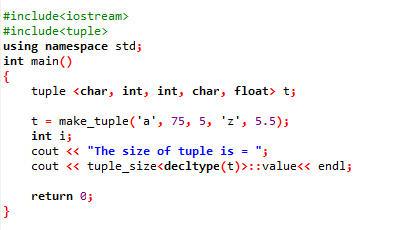 When you execute this code, the following output will be generated:

We assigned 5 values to the tuple and the tuple_size() function also returned the size of tuple 5.

In the code given below, we declared two tuples t1 and t2 and assigned 3/3 values to each tuple. Then, we used the tuple_cat() function to concatenate both tuples and create a new tuple out of them. After that, we simply printed the values of all tuples using the get() function. The tuple_cat() function takes the tuples that need to be concatenated, combines the values assigned to each tuple, and creates a new tuple out of it. 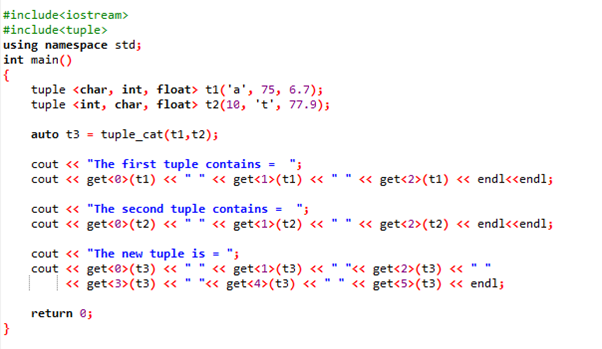 Here is the output:

This article is an overview of tuples in the c++ programming language. The tuple in c++ is an immutable object which carries the values of different data types at the same time. The tuples cannot be changed or modified at any point of execution since they are immutable. Several functions can be performed on tuples to achieve a certain result, 4 of them are demonstrated in this article with sample examples.