As we know, it is an object-oriented programming language that gives programs a clear structure, making it possible for code to be read within the same program. C++ is a relatively basic and easy-to-understand language.

size_type: an unsigned integer used to display the size in bytes of any object.

In return, we will get the exact location of the input string character, and then we can access the character by passing the index number in the at() method.

Now, let’s start explaining our first and simple example of the string at() method. We need any C++ compiler compatible with the string methods to implement our program. To code the Program in C++, we always need basic libraries to use manipulators of C++ in the existing program. The first library we are using in this program is “#include <iostream>”. The “#” sign instructs the compiler to load the header file, the “include” keyword incorporates the header file into the program, and the “iostream” specifies inputting the data from the user and display of data.

To use strings and string methods across the entire program, we have included the second header file, which is “#include <string>”. Then we used the “using namespace std” directive, which prevents classes, functions, and variables from utilizing the same context throughout the entire program. 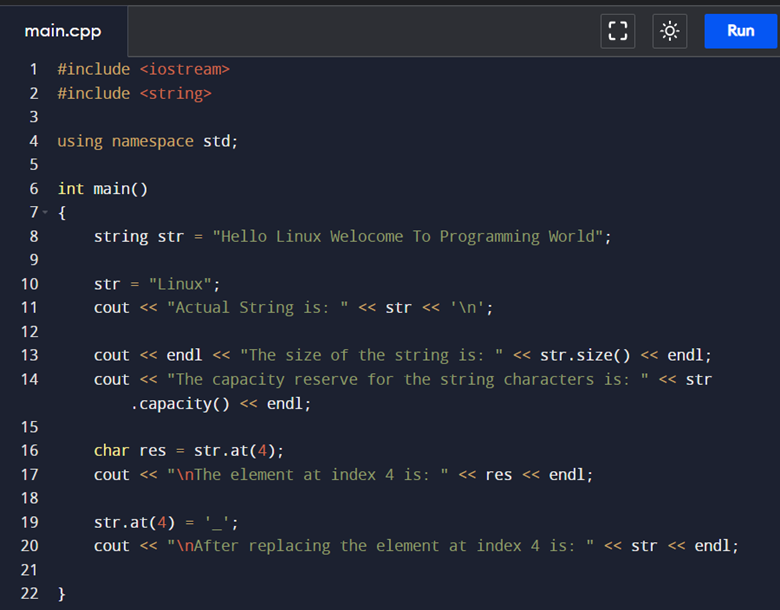 After importing the basic libraries and directives, we now move on to the main() function of the program. The main() function is used to write the actual line of code that we want to implement and get the results from it. In line 8, we declared a variable “str” of type “string”, and then we initialized the character string to the “str” variable. Next, we initialized another character string to the same variable “str” and printed it using the predefined cout() method of C++.

Then we want to get the size of the string we recently created. For that, we have called the size() function with the concatenation of the string variable, which is “str,” and passed the whole function into the cout() method so that we can display it. Then we also want to print the initialized capacity for the input character string. For that, we will use the capacity() function with the concatenation of the “str” variable. We have initialized the first string to get the string capacity from it.

After getting the size and capacity of the input character string, we move forward. Then we declare another variable, “res”, of type “char”, which means we are creating a character type variable. In this variable, we will store the character from the input string which we want to access. So we will call the at() method and pass the index number of the character in it and then concatenate it with the input string “str”. Then we wanted to print the element, so we used the cout() method, which is the predefined method of C++, and passed the “res” variable in it.

As discussed in the at() method, we can replace the character. For replacing each character that we have accessed is; first, we will write the variable or any symbol in a single quotation mark and then assign this to the at() method by writing the variable name “str” first and then concatenating it with the at() method and passing the index number in it. And then, we will display it by using the cout() method.

Here is the second example of the at() method of string datatype in C++ language. The implementation of this example is the same as we have implemented above. Still, the only difference is that we are accessing only one character simultaneously. Here, we are accessing the whole input string. For that, we declared the “str” variable of string type and assigned the input string to it. Then we have another variable, “res”, of the “int” type, and we have stored the length of the string in it. And then, we have a “for loop” so that we can print the input string characters one by one in a single line. 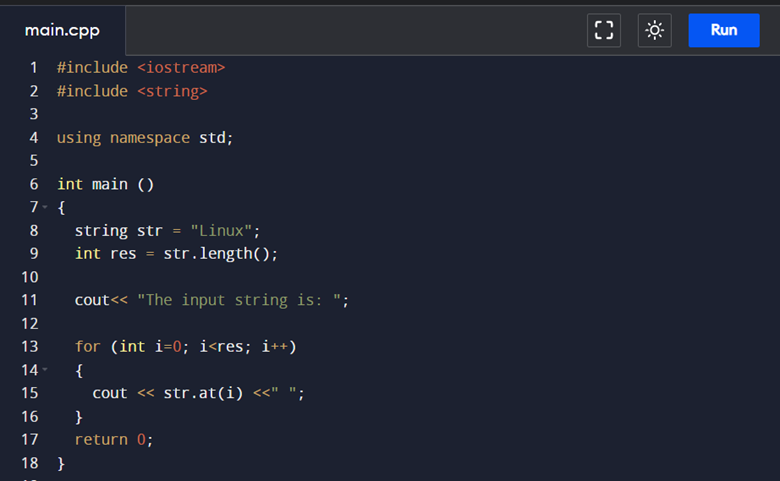 Here is the result of the overhead illustration:

In this editorial, we have come to know what the string at() method is and how we will use this method. We have also learned the writing style of the at() method and which kinds of errors and exceptions we will get through if we make logical mistakes. We have employed several illustrations to explain every line of code comprehensively. I hope you will learn a lot from this tutorial.