“C++ is an exceptionally versatile language whenever it pertains to carrying out various functions and changing a variable of one type to another. strftime()  is one of the functions which converts the date/time to the string. The string array of length maximum contains the outcome of the strftime() function, which writes the broken-down time tm by the formatting specified format. In time.<h>, the decomposed time object “tm” is implemented. Every formatting requirement is an uninitialized string that might also contain conversion requirements, which have been special character strings that are initiated by the symbol “%” and concluded by another character called a conversion identifier symbol. Common character sequencing makes up all those other special characters.”

The syntax of the strftime() function is mentioned below:

There are four parameters available for the strftime() function, i.e., str, count, format, and time. According to the value of format, the date – time information provided by the time is transformed into an uninitialized multi-byte string and saved in the array identified by str. The written data can only be up to count bytes.

str: Index towards the initial element of the string array used to hold the output.

count: The most bytes that can be written.

format: Address to a multi-byte given string that specifies the conversion’s layout and is uninitialized. The conversion specifier (which starts with % and may be preceded by either E or O) and other regular character types make up the formatted string.

time: Time is used to print the date and time in the output.

Format Specifiers play an important role in the input and output of the data in C++. It serves as a mechanism to inform the translator what kind of information is included in a variable when taking input with cin() or outputting with the cout() function. Following are the format specifiers used in the strftime() function.

Time: The given below format specifiers are used to represent time:

Month: The aforementioned format specifier is used time display the time in C++:

Week: To display the week, the given below format specifiers are used:

Days of The Week: The following below-mentioned specifiers are used to display the days of the week.

Second, Minute, Hour: These below format specifiers in C++ will display the output second, minute and hour:

The strftime() function, when successful, outputs the number of bytes that were successfully stored into the char array indicated by str, excluding the final “0”. The values are unknown, and 0 is returned if the count was exceeded just before the complete string might be saved.

C++ code can never run without header files. So, firstly we have added two basic and necessary header files, i.e., “time.h” and “iostream”. “time.h” is used to display the time and date. It uses “iosteam” for both input and output. The main function is defined as starting the execution of an actual line of code. It contains the three-character types of length 50 “local_date_string, local_time_string, current_day”. As you can see, we have used “tm” to print the local date/time of the country and have initialized the variable of time_h that will store the current time.

The second line of the function strftime(), %T is used to print the full-time means hours, mins, and seconds of the current time. And in the third line of the function, we have used %A to print the Current day. As you see in the illustration below, we have used “endl” at the end of the strftime() function; the “endl” is used to print the output in the next line. After that, we utilized two “cout” statements to display the output. Then we return the 0 to the main function. 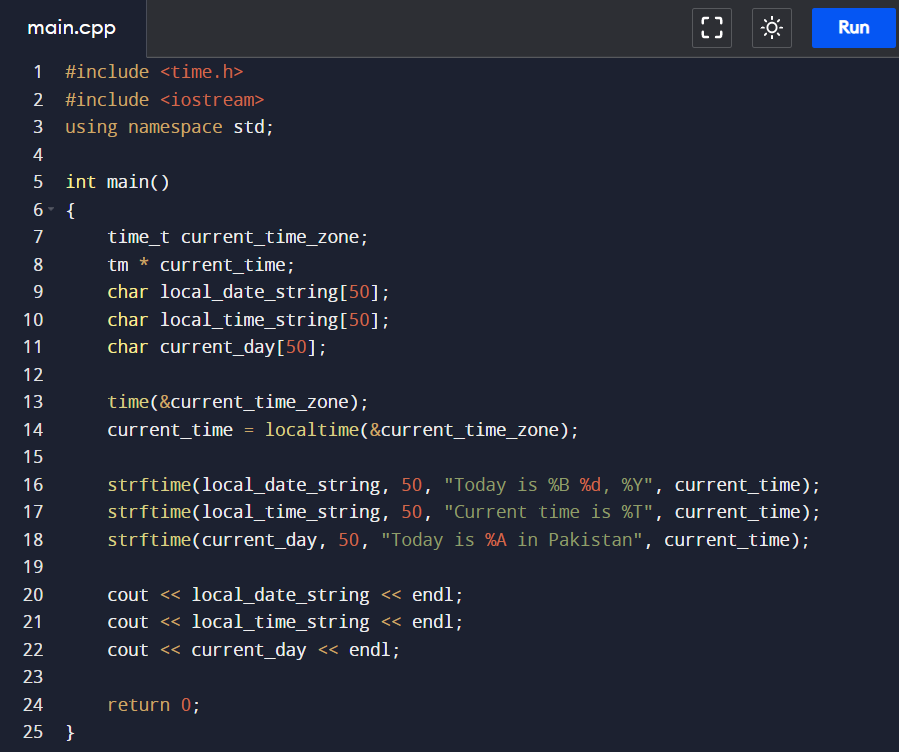 This is what the strftime() method returns which displays the current date, time, and day of the country Pakistan.

In this article, we have discussed the strftime() Function in C++ to format date and time. We have learned 4 arguments and format specifiers of the strftime() function. When we develop applications or software, it must display the time and, more importantly, the most pertinent information in a variety of forms as requested by the user. Then we shall employ the strftime() function in that scenario. Its unique selling point is the variety of ways in which we can present the date and time by using different format specifiers.