In many programming languages, we often use an operator named “modulus” with the symbol representation as “%”. This modulus operator is used to find the remainder when the two numerical integers or numbers are divided by each other. This operator takes the two operands: dividend and divisor. What is left after their division is done is the remainder, X % Y = R; where X and Y are dividend and divisors respectively and R is the remainder. We use this remainder as a piece of information if we want to know whether or not the two dividing numbers are factors of each or not. We also use the remainder to let us know if the number is even or odd.

The remainder in the output has returned a value equal to zero. This means that the x was completely divisible by the y. Hence, x is the factor of y. 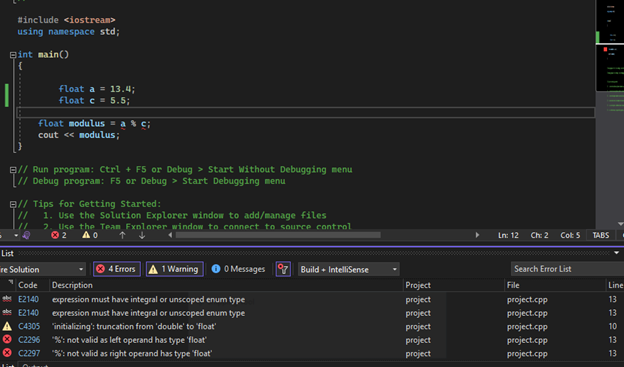 In the example when we used the float as the data type of the two variables “a” and “b” and assigned them the floating values e.g. 13.4 and 5.5 respectively. The modulus operator did not perform well on these two variables, and it had compilation errors pointing to data type float.

Example # 04
With the help of the modulus operator, we can also find out if the number is even or odd. We can use this function in applications where we want to check on certain odd and even values. To find the even number, we simply take the modulus of that number by 2. If the remainder comes out to be 1 or any number other than 0, the number is odd on the contrary. If the remainder comes out to be 0, the number is even. We have tried to implement this concept with the code given below:

The integer “a” was assigned the value 4 and taking its modulus with 2. The remainder resulted in zero which means that ‘a’ is an even number.

Example # 05
This example will show how we can make use of the mode operator modulus operator if we want to generate some integers that are less than the specific value or integer. We will use the rand function whose value will be then used by the modulus operator to pair with the desired upper limit of the specified maximum value. First, we will import all the important libraries as: