The Standard Template Library (STL) also provides a class called “deque” that implements all the functionalities for this data structure. A sequential container that functions as a double-ended queue data structure in C++ is called the STL deque.

Below is a list of the deque’s array implementation. We utilized the circular arrays to implement it because it is a double-ended queue. The double-ended queue is faster and more efficient than any other queue when it comes to adding and removing the components from both ends.

The time-consuming aspects of doing various deque processes include:

Let’s check out the types related to deque in C++.

Input is confined at one end but allowed at the other two.

In this deque, the output is prohibited at one end, but insertion is permitted at both ends.

We must first include the deque header file to generate a deque in C++.

After importing this file, the following syntax can be used to generate a deque:

The data type that we would like to store in the deque is indicated by object-type in this case. For example: int, float, string, etc. Deque-name is a variable name for the data that we are going to use.

In C++, the Deque function can be initialized in the following ways:

Both of these methods are used to initialize deque. In both of these deque names, “arr” is initialized with integer values 1, 3, 7, 0, 5, 8.

Following are the methods of deque:

Procedures on a Deque

These steps must be followed before carrying out the subsequent operations:

Set up a deque array and pointers.

Insertion at the Front

Step 1: This action adds a component in front. Check the front’s location.

Insertion at the Rear

Step 1: This action adds a component at the rare. Make sure that the array isn’t full.

Remove from the Front

Step 1: An element at the front is removed during the process. Make sure that the deque isn’t empty.

Remove from the Rear

Step 1: An element at the end is removed during the process. Make sure that the deque isn’t empty.

In this example, we create a deque. We first include our header files “#include <iostream>” and #include <deque> where #include commands the preprocessor to include the header file iostream and deque which contains all of the program’s functions. 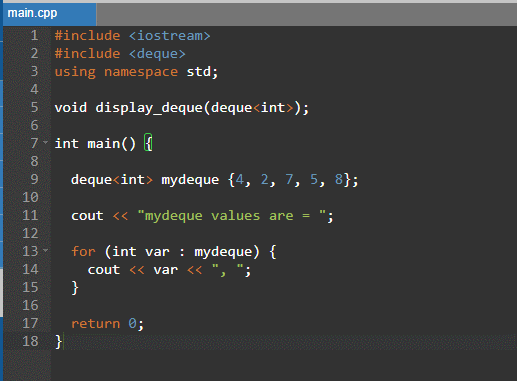 After that, we describe a display _deque function that is used to execute the deque values that we assign to it.

Moving into our main function, the int main() indicates that our function must return an integer value at the end of execution, which we do by returning 0 at the program’s conclusion by using a uniform initialization “deque<int> mydeque {4, 2, 7, 5,8}”. In this “int” is the data type of values that we assigned and mydeque is the name that we used for our deque. We assigned the integer values to the deque named mydeque that are 4, 2, 7, 5, 8. To display our deque, we used the for loop to a fixed size. And then, we pushed the run or F7 button to get the output of the program.

In this example, we add more values to a deque. After adding the required header files for this program, we move into our main function of the integer data type “deque<int> var {0, 1, 2}”. In this “int” is the data type of values that we assigned and “var” is the name that we used for our deque. We assign the integer values to the deque named “var” that are 0, 1, and 2. Then, we push two elements, element 8 at the front of the deque and element 5 at the end of the deque, using the push_front() and push_back() functions of the deque. So, the resulting deque that we have is 8, 0, 1, and 5. 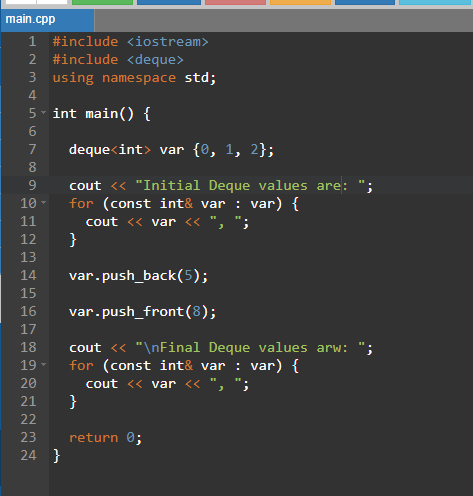 Once we are done with the coding of this example, we compile and execute it in any compiler. The result is depicting the expected output of the previous code.

In this example, we update the values in a deque after including our header files “#include <iostream>” and “#include <deque>” for this executable code. 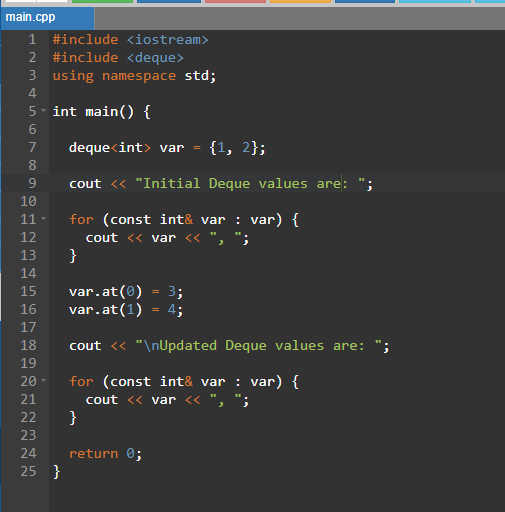 Now, we go towards our main function in which we first initialized our deque named “var” with values 1 and 2. Then, we use a for loop to display the values of our initialized deque. To update the deque values, we use the at() function (as we know, the at() function is used to refer to the specified position in the deque) at index 0 and 1, assigning new values to “var”. These are 3 and 4. Then, our updated dequeue is 3 and 4. After getting our code ready, we compile it using any compiler tool. Here is the desired output of our code:

In this example, we use the iterators to access the elements in the deque. An object that points to an element inside a container is called an iterator. 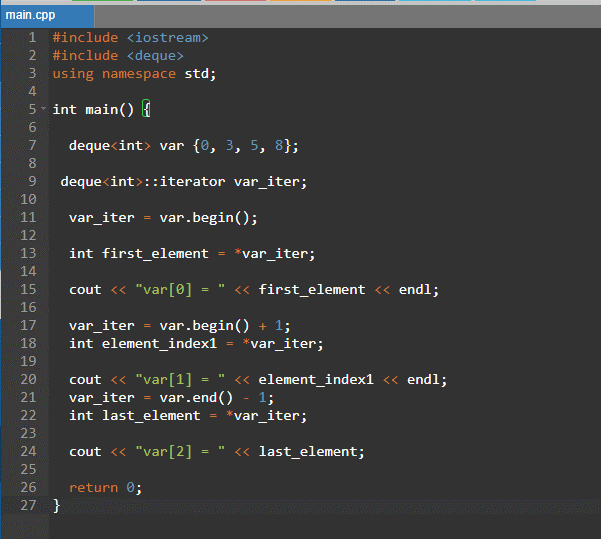 Initially, we created an iterator that can point to a deque of integers named ”var”. Then, we pointed to the following elements using the “var_inter” iterator. The iterator that the begin() method returns points to the first element. The “begin() + 1” generates an iterator using the element’s index 1 as its starting point. As you can see, we use the var.end() – 1 rather than the var.end().

The fundamental operations that can be carried out on deque are as follows:

Deque is the greatest option because it is quicker and helps the code run more quickly. The deque operates better for log sequences. This article is based on deque implementation and its major methods, which help us to modify the deque according to our needs. We aim to explain the deque and its methods as well as with examples of how to use the deque and when to use it. The tool that we used to implement code is the C++ compiler. We made a sincere effort to make this tutorial as simple and as understandable for you as possible.