In any code or a program, sometimes such a situation exists where we need to know how big the data of the filefile’s data is. We can get this through the number of lines of a file, instead of consulting the whole data. Counting the lines manually can consume a lot of time. So these tools are used, that ease us with our desired output. In this guide, wThis guide will cover some common and uncommon ways to count the line number in a file.

For understanding this concept, we need to have a text file. So that we apply the commands on that specific file. We have already created a file. Consider a file named file1.txt.

Otherwise, you first have to create a file. The file can be created through many methods. We will do it through the echo with the angular brackets in the command.

$ echo “text to be written in the file” > filename

The respective image shows that the file has 11 lines in it.

Similarly, there is another example in which we have used “nl” in the command. N will show the numbers, and –l is used to enlistfor enlisting all the contents with the line number. So here goes the command.

This example deals with the usage of a “wc” command. This is used in finding the number of words, bytes, lines, and characters. Here we will receive only the line numbers without text. To get the resultant value, use “wc” with –l in the command. This will provide the total number of lines with the file name as a result. So we will apply this command.

Another way of using the “wc” command is to use it with the cat command. This command allows the use of “pipe” along with the cat and wc -l. The content will act as input for the content part after the pipe in the command. The received output is concurrent in both cases. But the way of use is different.

The use of a “sed” command is elaborated in this example. The stream editor specifies that it is used to transform the text of the file. This is mostly used in the command where we need to find the required text and then replace it. “Sed” gets more than one argument to display the number of lines. In this command, we will use “sed” to get the count for the respective file.

We will use two operators here to describe its usage with both.

The first one is the equality sign. We will use “sed”, an equal sign (=) and –n option. This combination will bring the blank lines plus the numbering of lines. The content will not be shown here. Only the line numbers are displayed here. 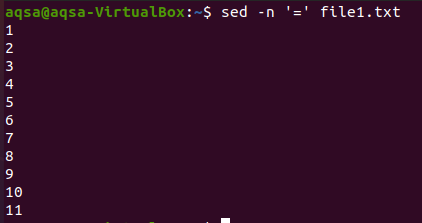 In the second option, we will use the dollar sign in addition to the equality sign. This combination is used with the “sed” and –n option. Unlike the last example, we will come to know the total number of lines only, not the context. Sometimes we need to have the last line number instead of having the numbers of all the lines of the filefile lines, ; for this, we use this approach.

An ‘awk’ is used in the command to collect the total numbers of the line. All the lines are considered as the record. At the END section, we will see the record number (NR). NR variable is a built-in of the ‘awk’. Only the last number will be shown. So one can easily know the total lines in the file.

“Grep” stands for Global expression regular print. “Grep” is another way of finding the filename or the text-related terms inside the file. “Grep” searches for the specific patterns in the file through the special characters and also finds the specific expressions that matched the ones present in the command through the regular expressions.

Similarly, here ‘$’ is used. That is known to find and display the end of the line. ‘-count’ is used to counting all the lines that match with the expression present in the file. So by using this command, we will be able to reach the end of the file and to count the line number of the content.

In this type, we have used both –h and –c together. As we know, c is to count, whereas –h will display all the matched lines. This means it will bring the last line with the file name.

We have used a “Perl” to count the lines in the whole file. “Perl” is expanded as “Practical Extraction and Reporting Language”. It is a scripting language like bash. It works like the “awk” command. It also prints the line number at the end, as shown through the command. Here “$” sign means to approachapproaching the end of the file. “-lne” is for the line.

Here we will try a loop to count. As in the programming languages, we often use loops for counting in any arithmetic operation. Similarly, here we will use a while loop. The loop has shown a condition to go to the end, and the counting process is done in the while whole body. The loop will work in such a wayso that the input is read line by line, and every time the value of count is incrementedthe value of count is incremented every time. We take print of the count at the end.