Tmux is an open-source terminal multiplexer application for efficiently managing multiple terminal windows. People who have previously used the Terminator application are mostly familiar with the notion of tab management in Linux Terminal. With Tmux, we can split the terminal into a number of panes. We can adjust these panes by moving around, resizing, and switching between them. This helps curb the pain of managing multiple windows and tabs of the Gnome terminal.

Note: In this ‘HowTo’ we have used the ‘Ctrl+b’ as the prefix; if you configured some other prefix, then replace the command with yours’ prefix.

In this guide, we will learn “How to do copy and paste work with clipboard in Tmux”. We will use Ubuntu 20.04 as the base system for this guide.

One of the most frequent tasks we do on a system is copying and pasting content. These may be copying commands to terminals, text to a file, or documentation work. However, in the case of Tmux, this is not as simple as pressing ‘Ctrl+c’ and ‘Ctrl+v’, which we usually do on normal text editor-type programs. In Tmux, the copy and paste tasks are somewhat different, and to some extent, it is a complicated one, especially when it comes to working between system clipboard and Tmux buffer.

Copying and Pasting in between the Tmux windows

Let us first see how we can do the copy-paste work in-between the Tmux panes and sessions. Suppose we have the following random text on our Tmux window of session sess_1:

We will copy this text to another: 1) Tmux session 2) Tmux window/ Tmux pane. Below steps will be the same for the above two cases:

Step 3. Move with the arrow keys to the position of the text you want to copy to. When you have finished selecting the text, press ‘Alt+w’ or ‘Ctrl+w’ to copy the text to a Tmux Buffer.

Step 4. Paste the text to a Tmux pane/window/session using the Prefix (by default, it is ‘Ctrl+b’ ) followed by ‘]’.

Let us take each of the above cases:

1. Copying to another Tmux pane/window: Here, we are using two panes for our session sess_1.

a) We first enter the copy mode: 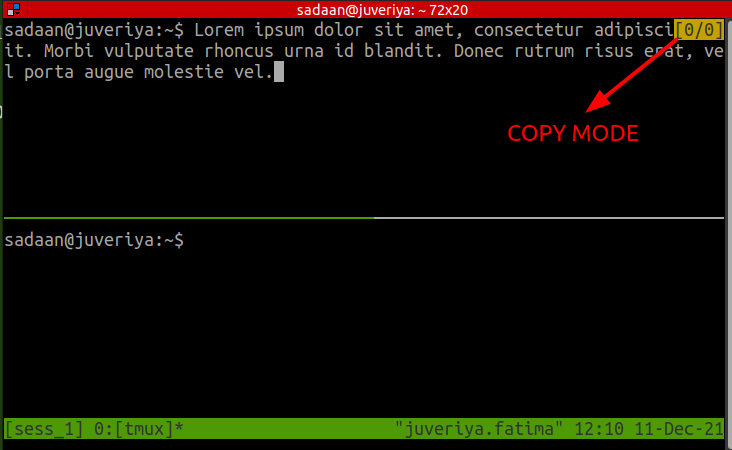 b) Select the text to copy with the arrow keys and press ‘Alt+w’ or ‘Ctrl+w’. 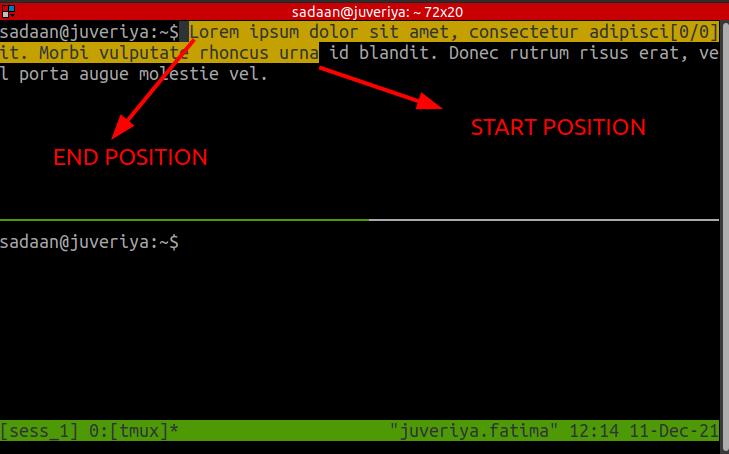 c) Copied text is pasted into the second pane of sess_1: 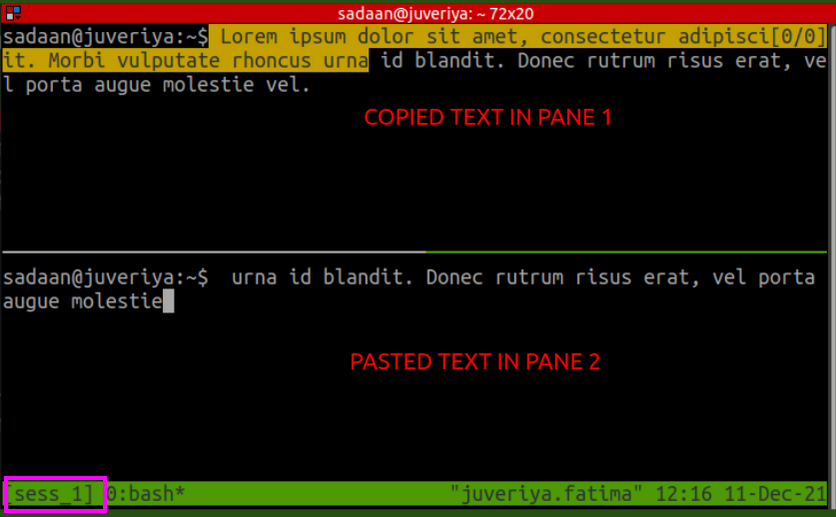 2. Copying to another Tmux session: We have now created another session, sess_2. 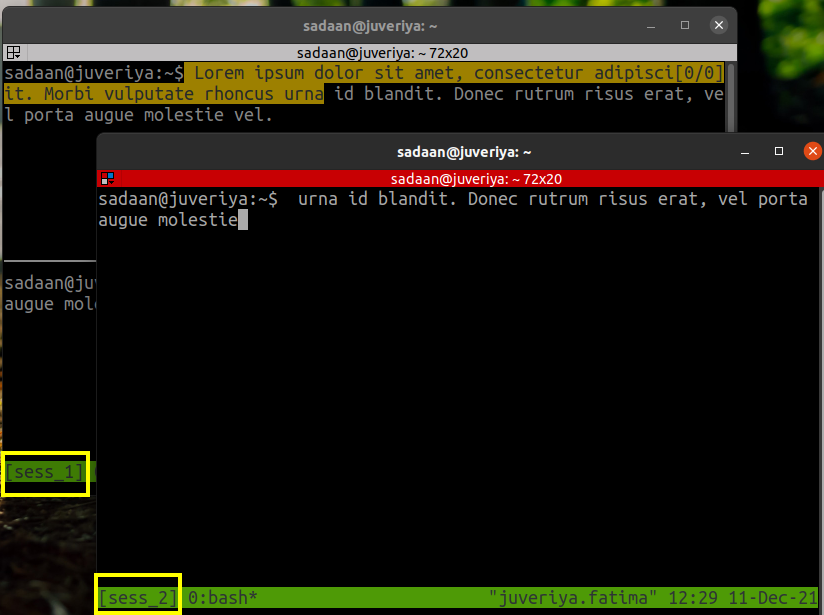 It is very easy to copy the contents from the System clipboard and paste it to a Tmux session using the normal key combination ‘Ctrl+Shift+v’. However, the reverse procedure is not that straightforward.

Step 1. To install ‘xclip’ on Ubuntu, use the command:

We have already installed it:

Step 2. We will now customize tmux.conf by adding the below line:

The first line makes the ‘prefix’ followed by ‘Ctrl+c’ to capture the current Tmux buffer and feeds this output to ‘xclip’. Now we can paste the copied text from the Tmux clipboard using the system clipboard: 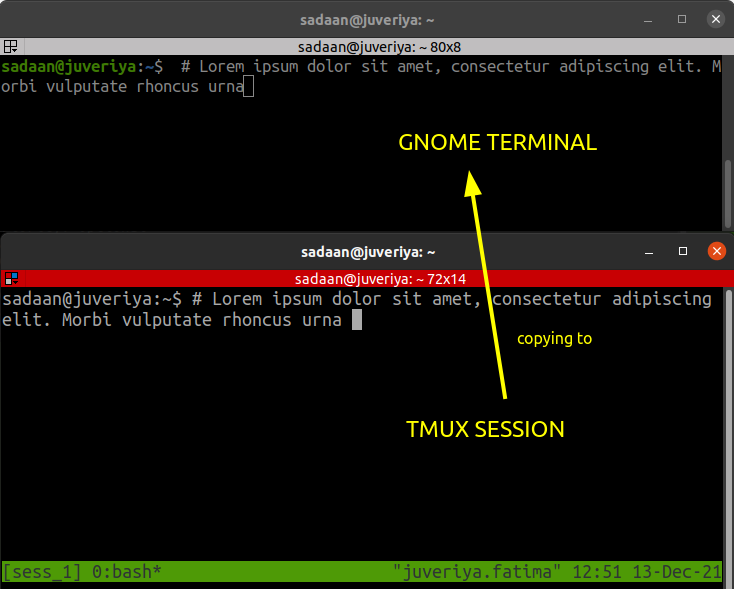 We can also copy the visible part of a pane by opening the Tmux command prompt with ‘Prefix’+ ‘:’ and entering the command ‘capture-pane’. The copied pane can then be pasted into the on-focus session. 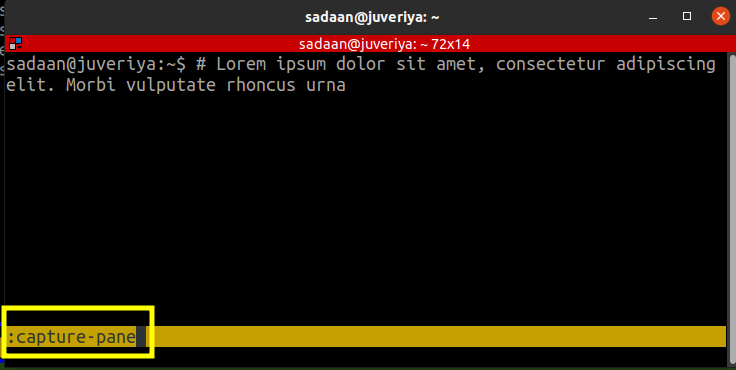 To view the contents of a paste buffer, use the below command inside a Tmux session:

Similarly, we can save this buffer to a text file as shown below:

Tmux creates a new paste buffer for every new copying operation. The numbering of buffers starts from the first buffer, which gets the number ‘0’. To view all the buffers, use the command:

The ‘prefix’ followed by ‘]’ keys will paste the buffer ‘0’. To choose which buffer to paste, use the command:

In this guide, we have learned about how to do copy and paste operations with Tmux. A more detailed explanation of various Tmux operations can be found on the Tmux Man pages or on the Github page of Tmux