A byte object is made up of a series of bytes. These are machine-readable and can be saved to disk immediately. Strings are in human-readable format and must be encoded before use. Text can be mapped to the disk using numerous different types of encodings. The ASCII and UTF-8 encoding systems are the most widely used.

Bytes and strings are well distinguished in Python. By supplying an encoding, you can encode a string to receive bytes and decode bytes to get a string. Inter conversions are common, but string to bytes conversions are becoming more common these days as we commonly need to translate strings to bytes when working with files or Machine Learning. You should be aware that conversions may fail, and how errors are handled should be considered.

Let’s have a look at a few illustrations of how this can be concluded. We will get to know about converting a Python string to bytes in this guide. Two methods are reviewed so that you can pick the one that best suits your desires. Although there are several techniques for converting Python strings to bytes, we will concentrate on the most common and simple ones. Now let’s look at some examples.

To convert a string to bytes, we may use Python’s built-in Bytes class: simply supply the string as the first argument to the function Object() { [native code] } of the Bytes class, followed by the encoding. Initially, we have a string titled “my_str”. We have converted this specific string into bytes.

This approach, as you can see, has transformed the string into a series of bytes. Note that this function transforms objects into immutable bytes; if you need a mutable method, use the bytearray() method instead. The item has been produced in a textual format that is easy to read, yet the data it contains is in bytes. Here is the result of implementing the code above. 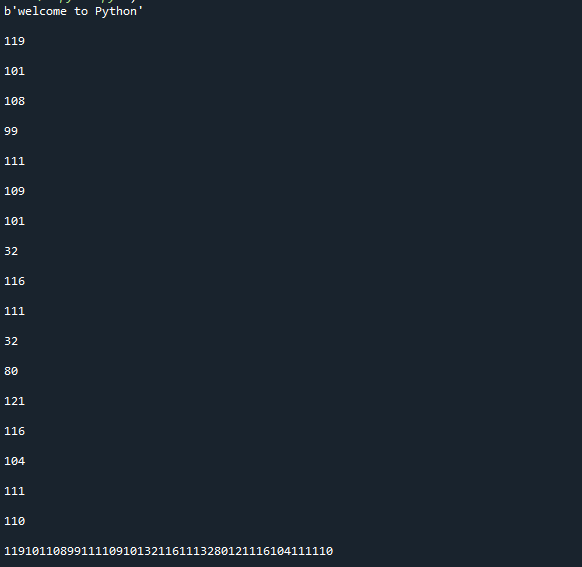 The encode() method was used in this example to translate the data. To convert Python strings to bytes, this is the most often used and recommended way. One of the main reasons is that it is easier to read. The syntax of the encoding method is as follows:

The string you want to convert is referred to as string. The encoding method you use is called ‘encoding.’ The string ‘Error’ shows the error message. UTF-8 has become the standard since Python 3.

We regard my_str=”Learn about programming” as the source to be transformed to bytes in the above code. We turned the string to bytes in the next step by using the encode() method. Before and after converting, the type() function is utilized to check the object type. enc=utf-8 is used here.

The above code generated the following output.

Both of these approaches efficiently tackle the same problem; therefore, choosing one method over another comes down to personal preference. However, we recommend that you select the option that best meets your needs. The byte() method returns an object that cannot be changed. As a result, if you need a changeable object, consider using bytearray(). The object should have a size of 0=x 256 for the byte() methods.