This guide will discuss how to configure and use iptables rules on an Ubuntu system to secure your network. Whether you are a novice Linux user or a seasoned system administrator, from this guide, and in one way or another, you will learn something useful about iptables.

Iptables come pre-installed on Ubuntu and most Debian based distributions. Ubuntu also packages GUFW firewall, a graphical alternative you can use to work with iptables.

NOTE: To use and configure iptables, you will need sudo privileges on your system. You can learn more about sudo from the following tutorial.

Now that you know what Iptables is, let’s dive right in!

How to Use iptables to Manage IPv4 Traffic?

To use Iptables for IPv4 network and traffic management, you need to understand the following:

Iptables offers a selection of options that allow you to customize and tune your iptables rules. Let us discuss some of these parameters and see what they do.

NOTE: You can configure a set of rules that manage a specific subset, known as iptables chains.

Before we begin creating and configuring iptables rules, let us first understand the basics of iptables, such as general syntax and default arguments.

Consider the command below:

The command above tells the iptables to create a rule in the chain. The rule drops all the packets from the IP address 192.168.0.24.

Let us examine the command, line by line, to understand it better.

The iptables command supports a wide range of options. Some common ones include:

NOTE: The default tables will heavily depend on your Kernel configuration and the modules installed.

Here are the default iptables tables:

The filter table is a default table that contains chains used for network packet filtering. Some of the default chains in this table include:

NAT or Network Address Table is a routing device used to modify the source and target IP-addresses in a network packet. The NAT table’s main use is connecting two networks in a private address range with the public network.

NAT was developed to support masking real IP addresses, allowing private IP address ranges from reaching the outside network. This helps protect details about internal networks from being revealed in public networks.

The NAT table gets employed when a packet initiates a new connection.

Iptables have a default table for NAT addressing. This table has three main chains:

The diagram below shows a high-level overview of this process.

Use the command below to view your NAT Routing tables.

The raw table’s main purpose is to configure exceptions for packets not intended to be handled by the tracking system. The raw table sets a NOTRACK mark on packets, prompting the conntrack feature to ignore the packet.

Conntrack is a Linux kernel networking feature that allows the Linux kernel to track all network connections, enabling the kernel to identify packets making up a network flow.

This table’s primary use is setting internal Security Enhancement for Linux (SELinux) security mechanism that marks on packets. The security mark can get applied per connection or packet.

It is used for Mandatory Access Control rules and is the second table accessed after the filter table. It offers the following default chains:

Having looked at the default Iptables, let’s go a step further and discuss how to work with iptables rules.

How to Work with iptables Rules?

Iptables rules get applied in ascending order. This means that the first rule in a specific set is applied first, followed by the second, then third, and so on, until the last.

Because of this function, iptables prevent you from adding rules in a set using the -A parameter; you must use the -I, followed by the number or by emptying it to add to the top of the list. 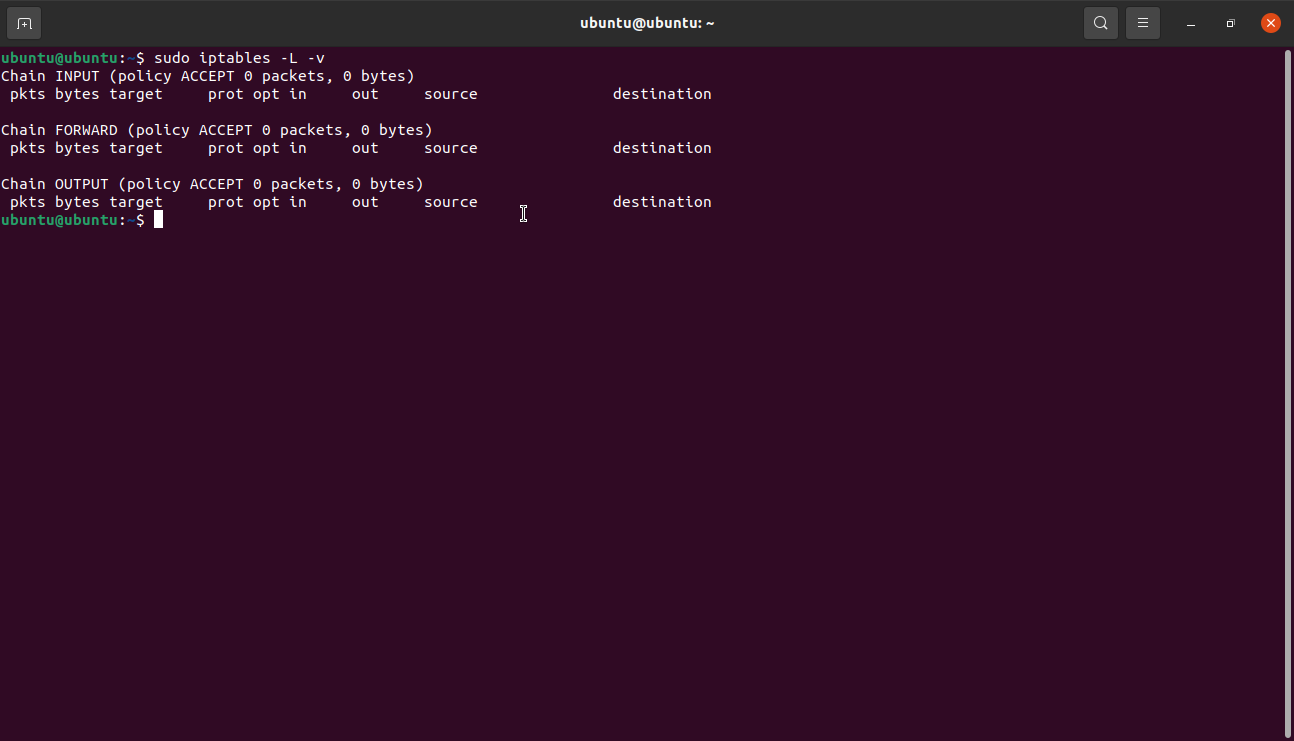 To insert rules in a set, you must position them in the exact order, respecting the rules used by the same chain. You can view the list of your iptables rules with the command as discussed above:

For example, to insert a rule allowing incoming connections to port 9001 over TCP, we need to specify the rule number to the INPUT chain adhering to traffic rules for the web.

Once you view the current iptables, you should see the new rule in the set. 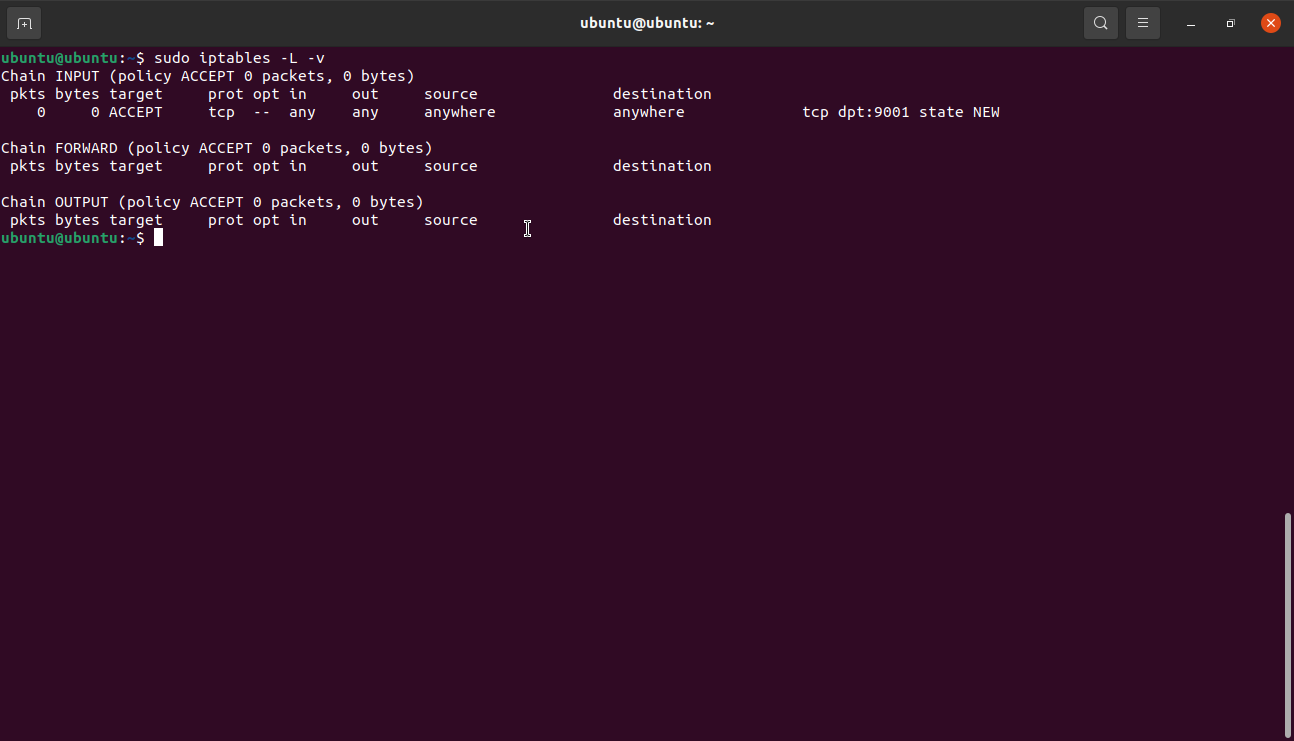 The replace functionality works similarly to insert, however, it uses iptables -R command. For example, to modify the rule above and set port 9001 to deny, we:

To delete a rule, we pass the rule number. For example, to delete the rule above, we can specify as:

In most Linux distros, iptables are empty for either IPv4 and IPv6. Hence, if you have not added any new rule, you will get an output similar to the one shown below. That is risky because it means the system is allowing all incoming, outgoing, and routed traffic. 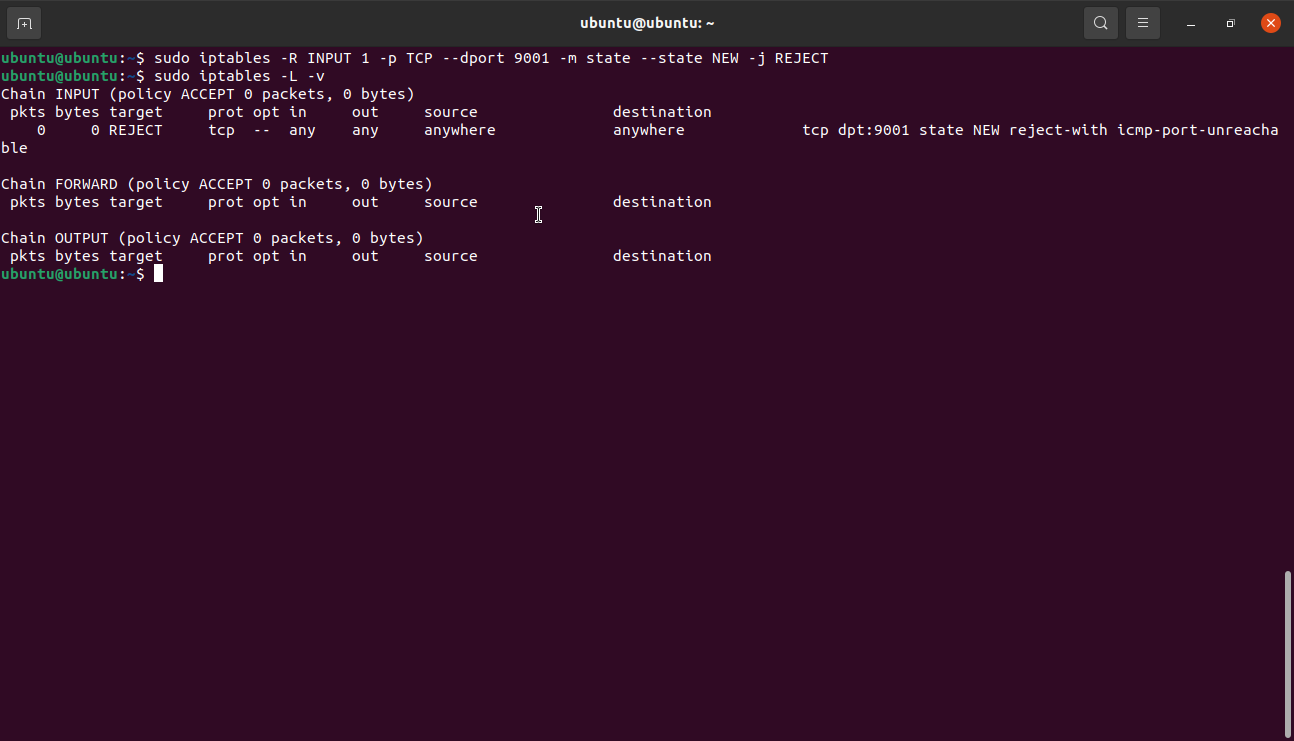 Let’s tuck into how to configure iptables:

How to Configure iptables?

There are numerous ways to configure iptables rules. This section uses examples to show you how to set rules using IP addresses and ports.

Blocking and Allowing Traffic by Ports

You can use a specific port to block or allow all traffic on a network interface. Consider the following examples:

The above commands allow traffic on port 1001 TCP on the wlan0 interface.

This command does the opposite of the above command as it blocks all the traffic on port 1001 on wlan0. 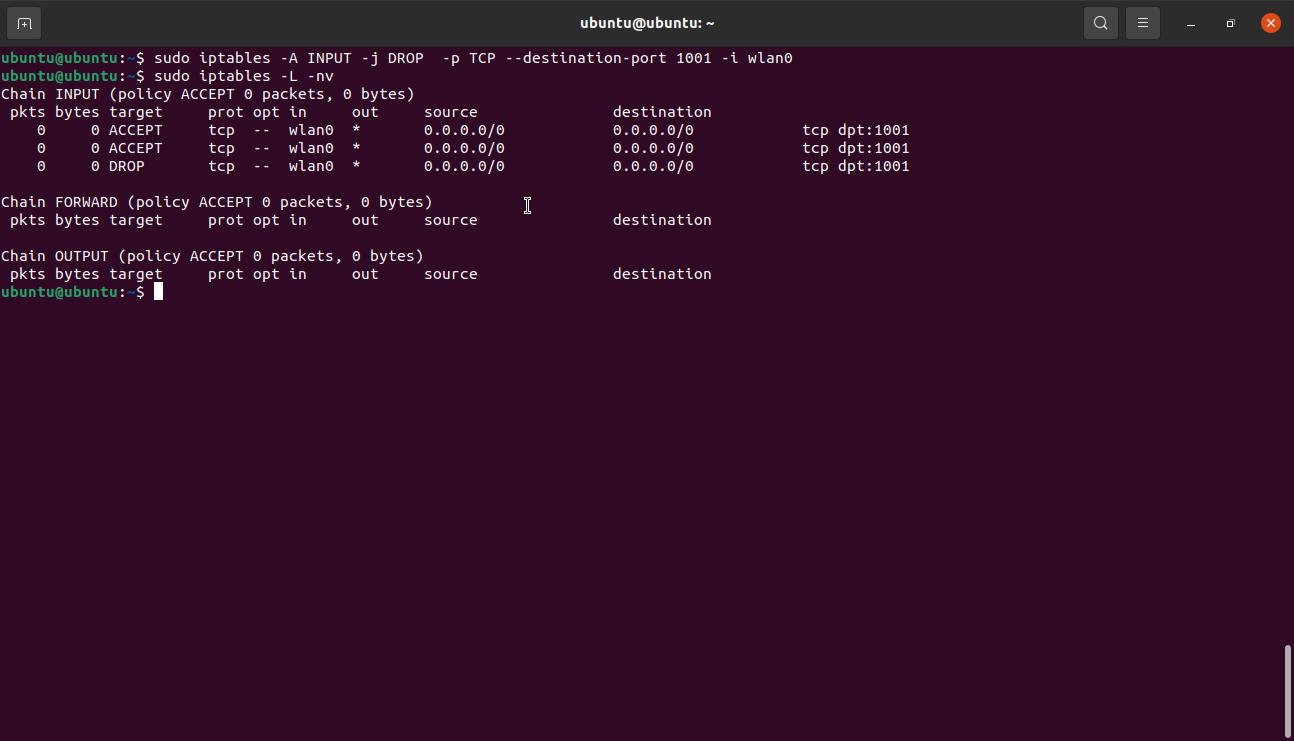 Here’s a close inspection of the command:

NOTE: Iptables do not understand network interface aliases. Thus, in a system with more than one Virtual interface, you will need to define the destination address manually and explicitly.

You can create firewall rules using iptables. One example is by stopping all traffic and allowing network traffic from explicit IP addresses only.

Iptables command only works on IPv4. To use iptables on IPv6, you have to use the ip6tables command. Ip6tables uses raw, filter, security, and mangle tables. The general syntax for ip6tables is similar to iptables, and it also supports matching iptables options such as append, delete, etc.

Creating suitable firewall rules will mainly depend on the service running on a system and the ports in use. However, here are some basic network configuration rules you can use to secure your system:

1: Allow Loopback interface traffic and reject all loopback coming from other interfaces

These are example commands you can use to secure your system. However, the configuration will heavily depend on what or who you want to access various services.

CAUTION: If you prefer to disable IPv6 completely, ensure to uncomment the line as this will slow down the update process: 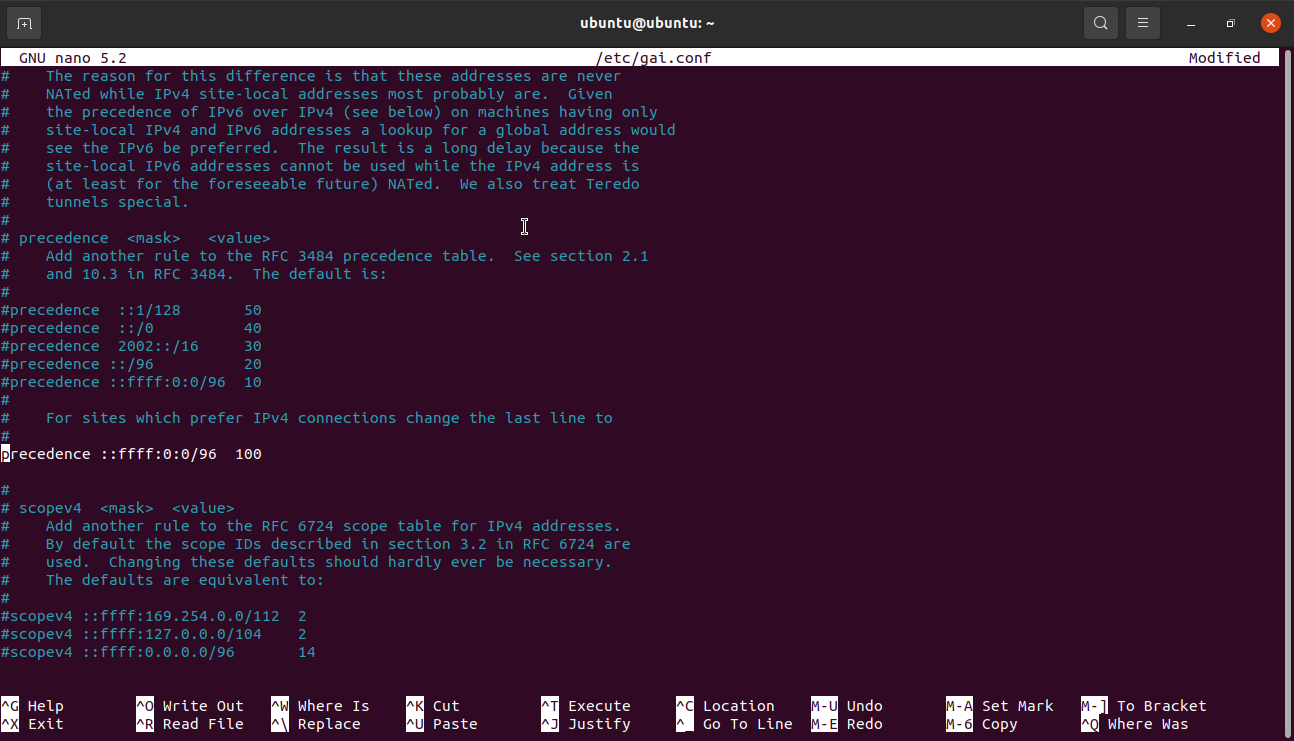 That’s because the APT package manager resolves the mirror domain in IPv6 due to apt-get update.

How to Deploy iptables Rules?

To deploy your iptables on Ubuntu or other Debian-based systems, start by creating two files, ip4 and ip6, for their respective IP addresses.

In either file, add the rules you wish to enforce in their corresponding files—IPv4 rules to ip4 file and IPv6 rules to ip6 file.

Next, we need to import the rules using the command:

Then, you can verify if the rules have applied using the command:

Ubuntu, and common Debian-based distributions, comes with an iptables-persistent package that allows you to apply your firewall rules easily upon reboot. The package provides files you can use to set rules for IPv4 or IPv6 and can be applied automatically upon boot.

You can also use firewall rules using UFW or GUFW. Consider the following tutorial to learn how to use UFW.

How to Install iptables-persistent?

Ensure you have iptables-persistent installed on your system. Use dpkg to check if you have the package installed.

If not, use the following command: 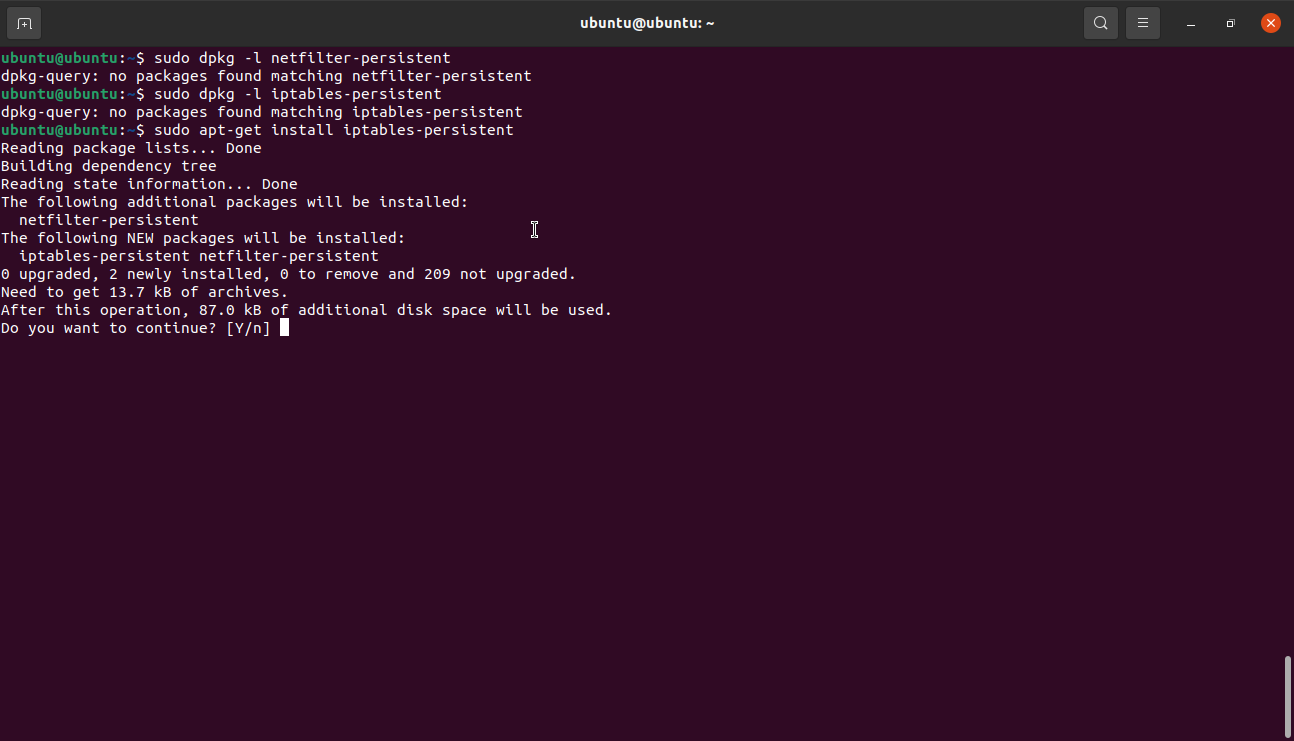 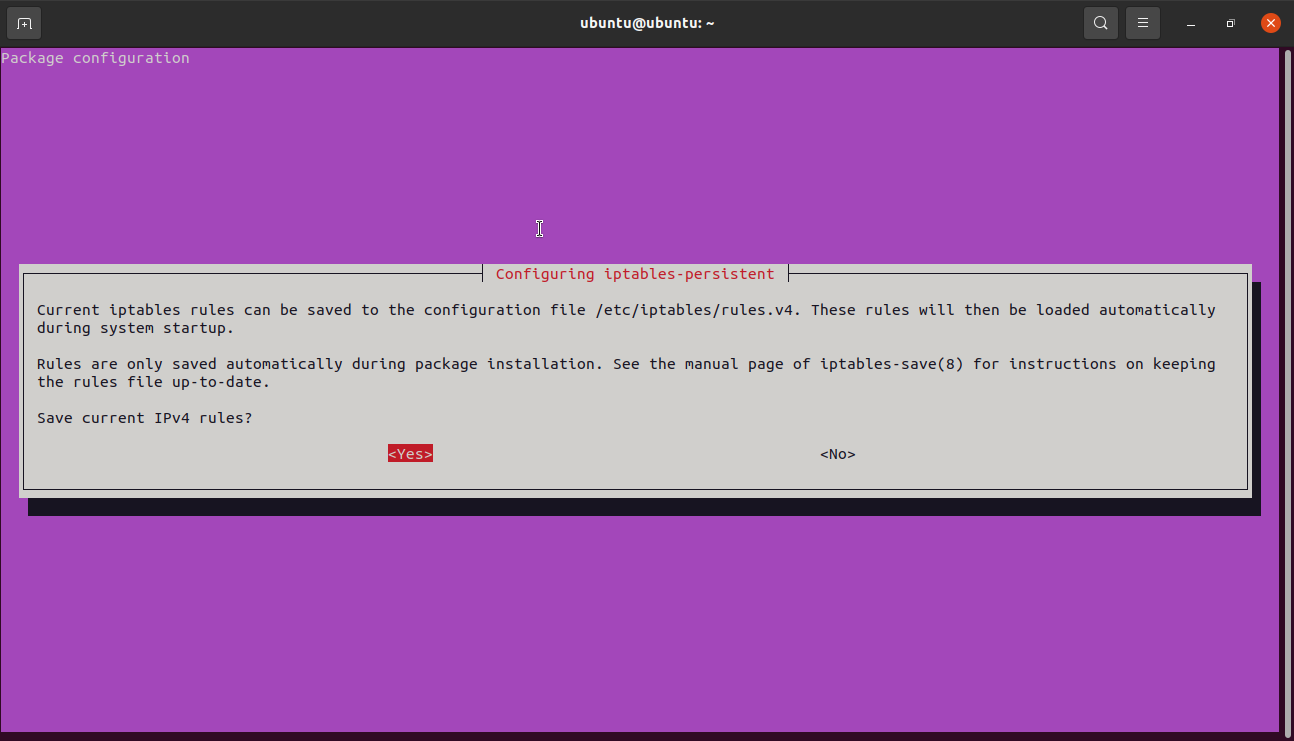 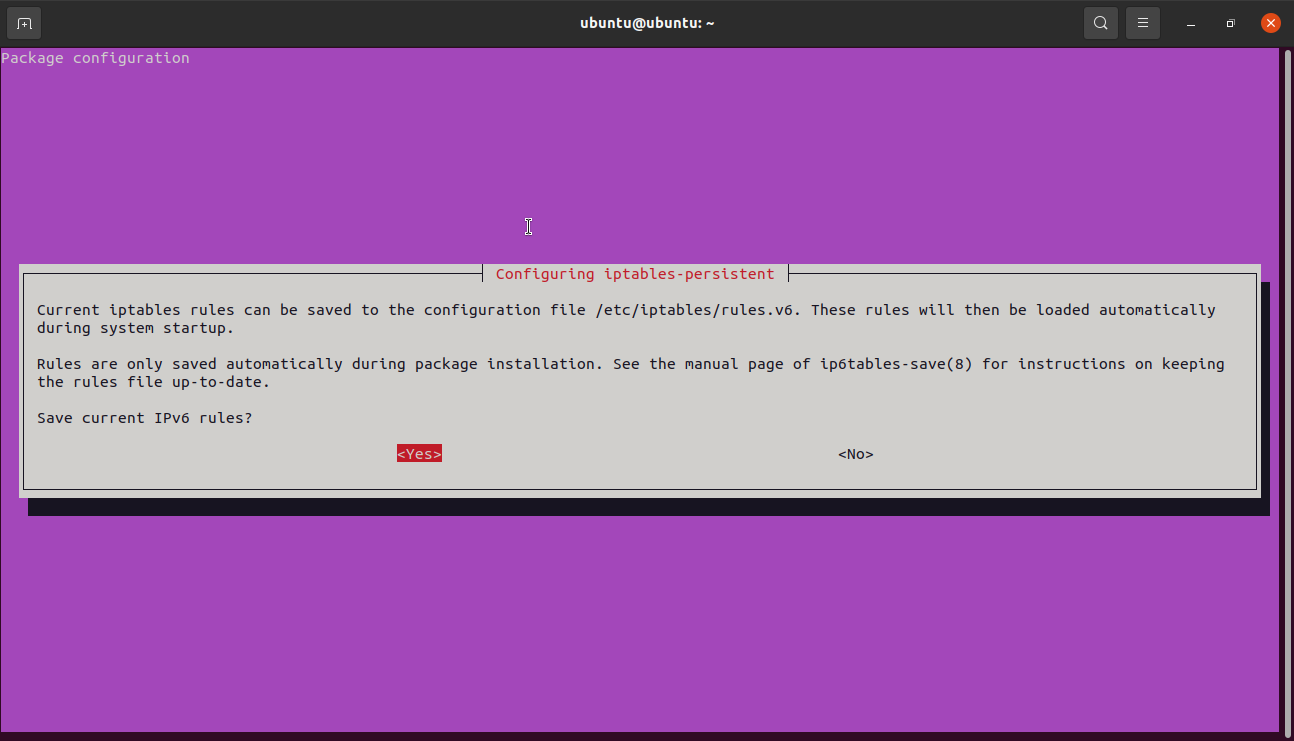 Once the installation is complete, verify that you have the iptables subdirectory, as shown in the image below. 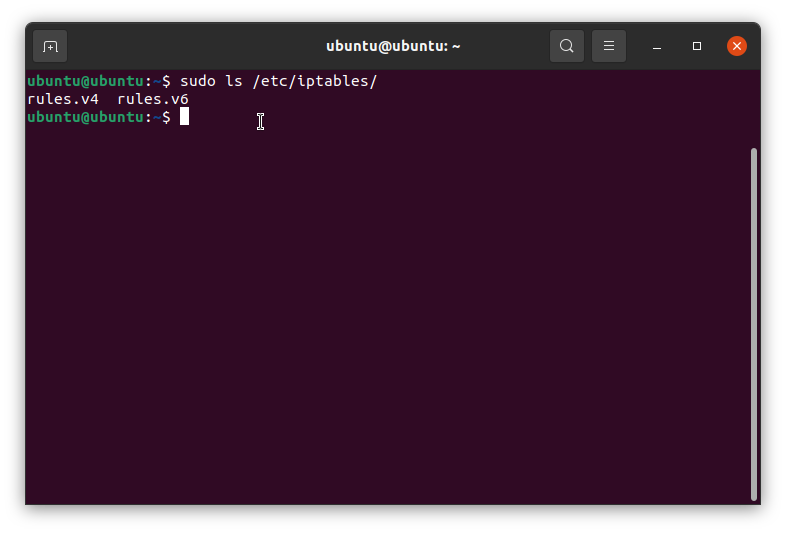 Now you can use the rules.v4 and rules.v6 to add iptables rules, and they will get applied automatically by iptables-persistent. The files are simple text files that you can easily edit using any text editor of your choice.

In this tutorial, we have covered the basics of iptables. Starting with working with iptables, basic commands, default iptables tables, and parameters.

From what you’ve learned, you should be in a position to use iptables to create firewall rules that help secure your system.