FTP (File Transfer Protocol) is primarily used to transfer files between computers. FTP works in client-server architecture, in which the client asks for a file from the server and the server returns the required file to the client. On the client machine, the FTP client application is used to communicate with the server. It is also possible to access the FTP server on the browser. By default, FTP communicates over an insecure channel, but it is possible to configure FTP to transfer data over a secure channel. In this tutorial, you will learn how to configure an FTP server with TLS and then use FileZilla as a client application to connect with the FTP Server.

VSFTPD (Very Secure FTP Daemon) is a software program used to configure FTP on a server. In this tutorial, VSFTPD will be used to configure the FTP server on the machine. Before installing VSFTPD, update the repositories in your server by issuing the following command.

Finally, verify the installation by checking the version of vsftpd with the following command.

The above command will output the version of vsftpd if the installation is successful.

A problem can arise where the client is behind a firewall and port X is blocked. In this case, the server is not able to establish a data connection with the client. To avoid this problem, the FTP server is mostly used in Passive mode, which we will discuss later in this article. By default, VSFTPD uses Passive mode, so we will have to change it to Active mode.

Add the following line to the end of the file.

Also, be sure that the ‘connect_from_port_20’ option is set to ‘YES.’ This option ensures that the data connection is established on port 20 of the server.

Next, create a directory that the FTP server will use to store files. For this tutorial, we will configure ‘/home/ubuntu/ftp/’ as the root path for the FTP server.

Now, specify this directory in the configuration file by changing the ‘local_root’ option. The following parameter will configure the root path of the server.

The ‘write_enable’ option must be enabled to allow users to write to the FTP server.

Every time you change the configuration file, always restart the server.

The FTP client connects with the server using a username and password. Set the password for your user on the machine using the following command.

The above command will ask for the password for the ‘ubuntu’ user.

Configuring the Firewall for Active Mode

If FTP is used in Active mode, the FTP server will use two ports to communicate with the client, ports 21 and 22. Port 21 is used to pass commands to the client, and Port 20 is used to transfer data to any random port of the client. We will use ufw to configure the firewall on the server. Install ufw using the following command.

ubuntu@ubuntu:~$ sudo ufw allow from any to any port  proto tcp

Enable and check the status of ufw using the following commands.

NOTE: if you are configuring your FTP server on the cloud, you will also need to allow ports 20, 21, and 22 in the security group.

WARNING: Always enable port 22, along with the required ports, before enabling ufw on the remote system. By default, UFW blocks traffic from port 22, so you will not be able to access your remote server using SSH if you enable ufw without allowing traffic from port 22.

Open the FTP client application and enter the public IP address and other credentials of the FTP server.

When you click ‘Quickconnect,’ you will connect to the FTP server and automatically be taken to the directory specified in the ‘local_root’ option in the ‘/home/ubuntu/ftp’ configuration file.

Using FTP in Active mode raises problems when the client is behind the firewall. After inputting the initial control commands, when the server creates a data connection with the client on a random port, the port may be blocked by the firewall on the client, causing the data transfer to fail. FTP can be used in Passive mode to resolve these firewall problems.

Open the FTP configuration file in your favorite editor.

The data connection between the server and the client will be established on a port between 1024 and 1048. Restart the FTP server after changing the configuration file.

Configuring the Firewall in Passive Mode

If we use FTP in Passive mode, the data connection will be established over any port from 1024 to 1048, so it is necessary to allow all these ports on the FTP server.

ubuntu@ubuntu:~$ sudo ufw allow from any to any port  proto tcp 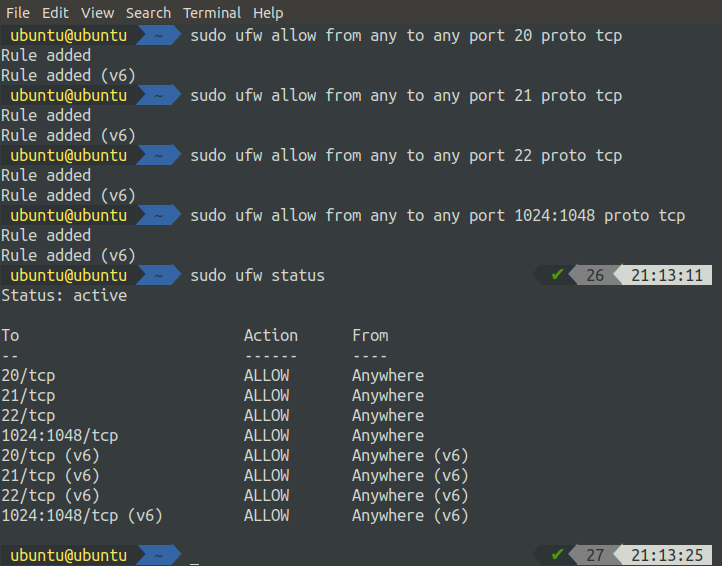 After allowing all the ports on the firewall, activate the ufw by running the following command.

Always allow ports on the server before enabling the firewall; otherwise, you will not be able to access your server via SSH as ufw, which blocks port 22 by default.

Now, we have set up the FTP server in Passive mode and can check the ftp connection with the client application. Open FileZilla in your system to do so.

After entering the host, username, password, and port, now you can connect with your server. Now that you are connected to the FTP server running in Passive mode, you can upload files to the server.

Using Certificates in the Configuration File

Now, our certificates are ready to use. We will configure the ‘vsftpd.conf’ file to use the SSL certificates for communication. Open the configuration file with the following command.

Add the following lines to the end of the files. These changes will ensure that the FTP server uses the newly generated SSL certificates to communicate securely with the client.

Restart the FTP server to apply these changes. 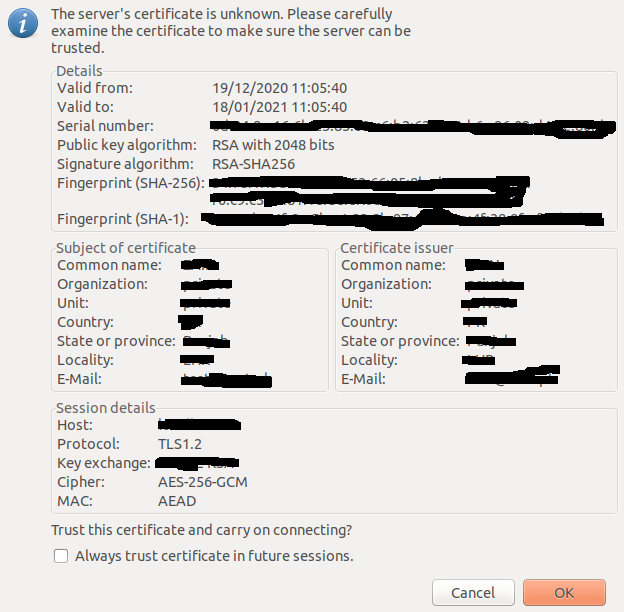 The above configuration sets the root path for anonymous users to be ‘/home/ubuntu/ftp/anon’ and it will not prompt for the password when an anonymous user logs in.

NOTE: Ensure that the ‘/home/ubuntu/ftp/anon’ path exists on the FTP server.

After restarting the server, we will try to connect to the server via the Google Chrome Browser. Go to the following URL.

We can also allow or block local access to the FTP server by changing the configuration file. Currently, we can access our FTP server locally without using the FTP client application, but we can block this access. To do so, we must modify the ‘local_enable’ parameter.

After restarting the server, try to access the FTP server locally by using the command-line interface. Log into your remote server using SSH.

Now, issue the following command to log into the FTP server locally using the command-line interface.

When you run the above command, it will throw a 500 error.

File Transfer Protocol has been used for many years to transfer files and documents over the Internet. VSFTPD is one of the packages used as an FTP server on your machine. VSFTPD contains various configurations that you can use to customize your FTP server. This tutorial showed you how to configure an FTP server with TLS for enhanced security. To learn more about FTP configurations, visit the following link.