The syntax for four types of conditional statements is mentioned below.

The statement executes when the if condition returns true.

Example-1: Using simple if in awk

Create a text file named emplyee.txt with the following content. Suppose, you have to find out the department name, age, and salary of the employee whose id is 11002.

A simple if condition is used in the following script to search the id 11002 in the first field of the file. If the condition becomes true then it will print the values of the other fields of the corresponding line otherwise nothing will be printed.

The id, 1102 exists in the file. So, it printed the other values of the employee. 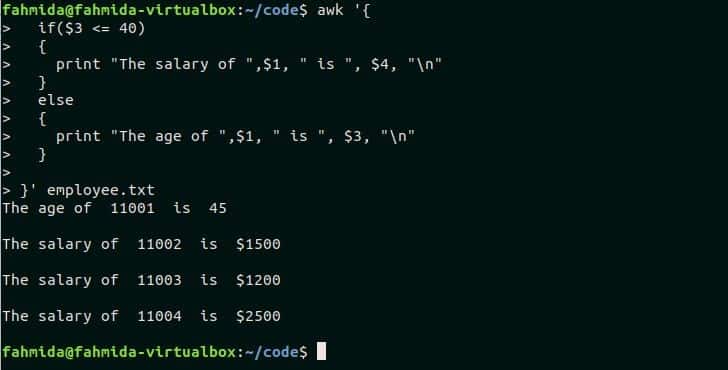 Create a text file named person.txt with the following content.

Create a awk file named if_elseif.awk with the following code to print the favorite color of each person whose name exists in the file. If-elseif statement is used in the script to do this task. The script will read the first field value of the file, employee.txt and check with a particular value. If the first if condition becomes false then it will check the second if condition and so on. When any if condition becomes true then a color value will be assigned. If all conditions become false then None will be assigned as the color value. The favorite color of each person will print or “No person found” will print if no person name matches.

Run the following command to execute the file if_elseif.awk with person.txt

The following output will appear after running the command.

The following output will appear after executing the script. One person with “Manager profession exists in the person.txt. So, the name of one person is printed and gender is printed for other persons.

Logical OR and Logical AND can be used to define multiple conditions in the conditional statement of awk script. The following awk script reads each line of employee.txt and checks the age and designation with particular values. Logical AND is used in the if condition. When the age value is greater than or equal to 30 and designation is “HR” then the corresponding employee id and salary will print.

The following output will appear after executing the script. There is only one employee exists with the designation, “HR” in employee.txt. Id and salary information for this employee is printed here.