The collation is a very important process of character arrangement and enables both the system and the user to correctly understand or display the texts, web pages, and programs regardless of the alphabet used or the region in which they were written and their alphabetic differences.

The algorithms for character sorting are quite lengthy and cumbersome to explain. Therefore, in this Linux Hint article, we will give a brief overview of the character encoding and sorting the mean based on various local data. We will then explain how to use the two basic features that C provides to handle the character strings based on the language and collation of the various local data used in computing.

It is very important to clarify that Unicode encoding is a multi-byte encoding, so one character can occupy multiple “chars”. Although, in this article, we will see the two basic functions to handle the characters with collation in the data of type “char”. The “wchar.h” header defines the multibyte characters and provides similar functions for handling the characters with large size.

Character encoding is the assignment of a representative binary numeric value to each alphabetic character, symbol, special character, or control character

The ASCII code is one of the simplest and most widely used “i” C language. It is the encoding that we usually use for characters of “char” type that we put into strings. This encoding uses a single byte per character, 7 bits to represent each character of most western alphabets, as well as their control and special characters. The remaining bit is used for parity checking during error detection. In the extended version, all 8 bits are used to represent the additional characters.

While ASCII met the requirements of most Western Latin alphabets, it did not for Eastern alphabets. The Unicode encoding includes all characters of the alphabets of all Western and Eastern languages. This is why it is currently one of the most widely used, thanks to its portability in text encoding, its flexibility, and compatibility with the ASCII code.

This extensive set of encoded characters is divided into groups, each of which has a specific lexicographic order to form the alphabet for each language or region.

The portability and exchange of information often means that we have to process the characters and files written in another region. The lexicographic order of the characters that is used in the alphabet that created them does not match the one that is used by our system.

These differences make it necessary to rearrange the characters according to the alphabet and the zone in which the text is to be interpreted.

Local Data of the Operating System

Every time we turn on our computer, Linux loads a set of predefined parameters set during installation or later modified by the user that determines the language, encoding, type of characters used, and sorting rules for the region. This determines how the text is rendered and displayed by the system

These parameters are called local data. We can display them in the Linux console using the following command:

This command displays in the console. Among other things, the parameters for the system’s local data, language, character encoding, and sorting for that region.

As we can see in the figure, the encoding for the regional English language of the United States is en_US.UTF-8. To see the list of different local data and encodings installed in our OS, we need to run the following command:

The following figure shows the list of locale data which is installed in the operating system.

Note that while the language is the same for all options, in this case is the English (en), the encoding and sorting settings are not. The one for the United States is “en_US” while the one for Canada is “in_ CA”. 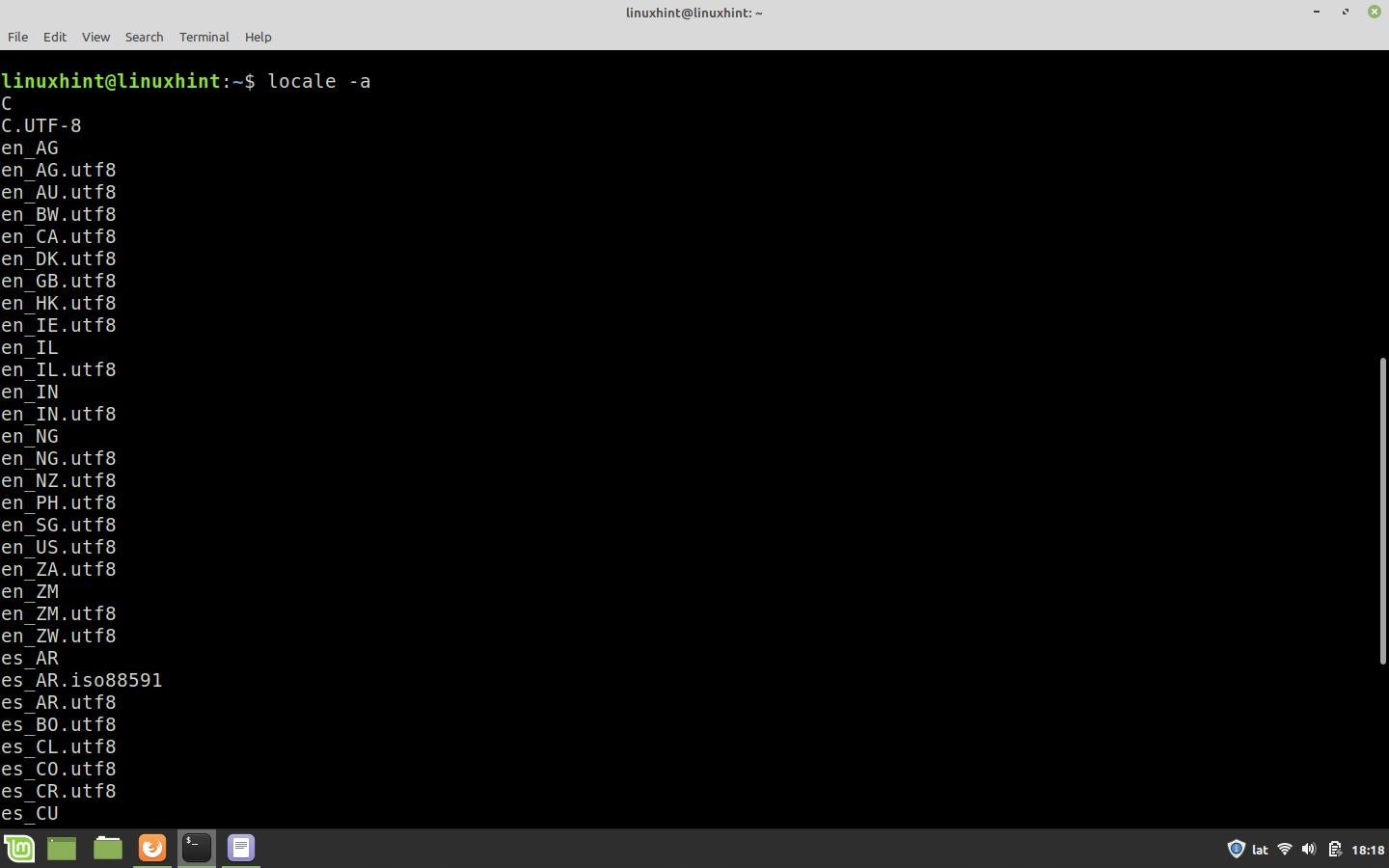 The same parameters that are returned by the command “~$ locale” in the Linux console are defined in the “locale.h” header in C with identical syntax and representation and can be changed in the local instance with the setlocale function.

Syntax of the Setlocale() Function in the C Language

Description of the Setlocale() Function in the C Language

The setlocale() function selects the local data that the program that we are compiling uses. We can also check the current configuration. If these parameters are not set by this function in the code, the program defaults to using the local data of the system on which it runs.

Next, let us look at the list of the most important parameters that the setlocale() changes or queries that affect the language and sorting process:

LC_CTYPE= Specifies or queries the type of characters for the locale.

LC_NUMERIC= Specifies or queries the type of numeric characters.

LC_TIME= Specifies or queries the calendar and time data for the local setting.

The strxfrm() function is defined in the “string.h” header. To use it, we need to include it in our code as follows:

The setlocale function provides the ability to change the locale data in general or each of its parameters individually. It also provides the possibility to query the used configuration.

To do this, we must call the setlocale() function and pass the parameter that we want to query as the first input argument and an empty string as the second argument.

The setlocale() function returns the pointer to a string which contains the name of the current locale data. The following is the code that queries the current configuration and displays it in the command console:

As seen in the following image, setlocale returns a string with the current locale: 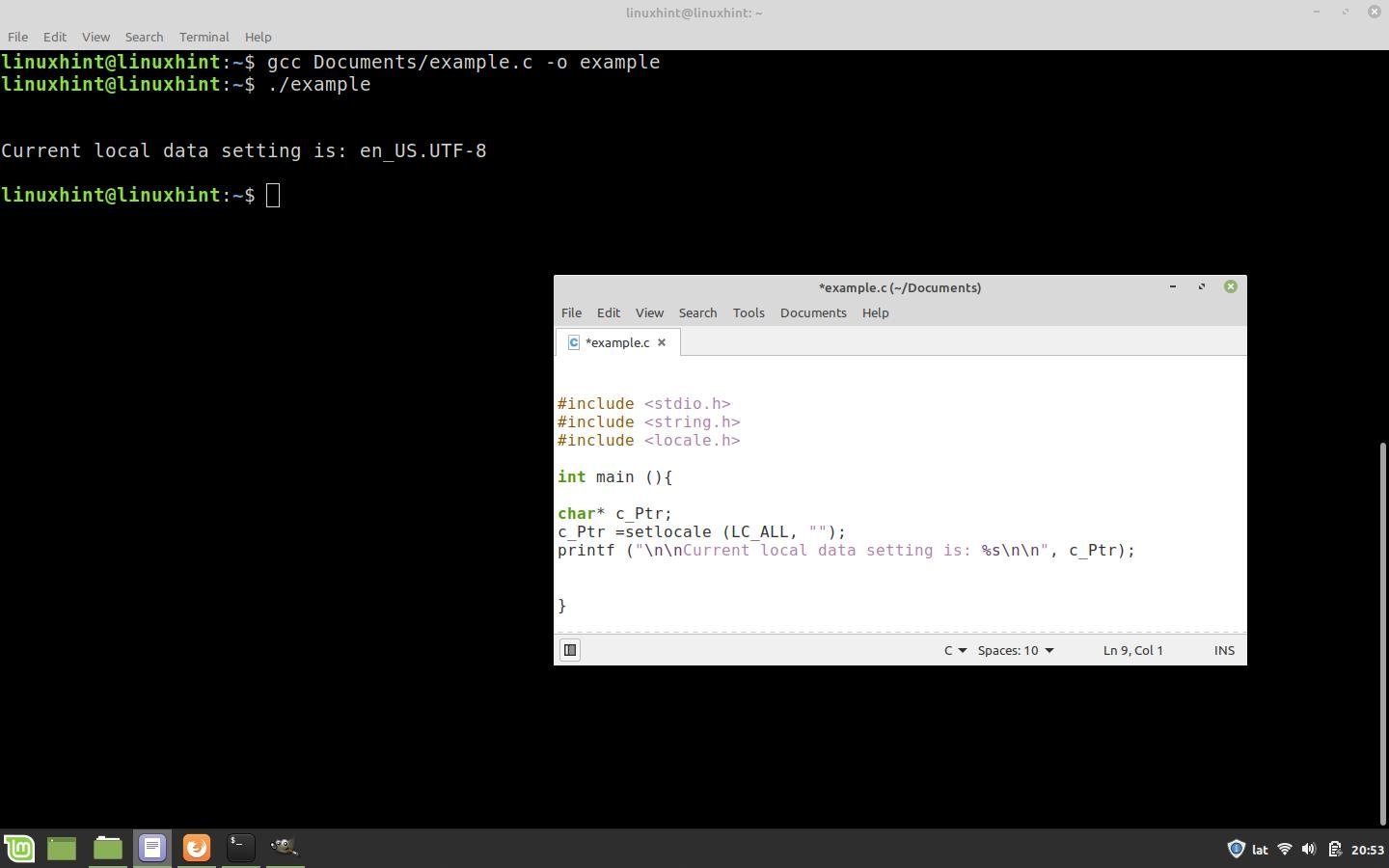 The setlocale() function can be used to select or change the local data in general with “LC _ALL” or via the individual parameters to perform the collation of characters based on the range we choose.

To do this, we need to call the setlocale() function and pass the parameter that we want to change as the first argument and a string with the local configuration that we want to select as the second argument.

Here is the code to select the UTF-8 encoded Canada locale collation:

As we have seen so far, the sorting is completely tied to the selected locale. Next, let us look at the two functions that the C language provides to handle the strings based on our chosen local configuration: strxfrm() and strcoll().

Description of the Strxfrm() Function in the C Language

The strxfrm() function works similarly to the strcpy() function, except that it allows us to specify which zone configuration rules that the new string should return. This adds flexibility to the use of this function since we can use setlocale() and strxfrm() to convert the strings with the locale that we choose, as well as create them.

The strxfrm() function is defined in the “string.h” header. To use it, we need to include it in our code as follows:

To do this, we use the setlocale() to set the sort order for the locale of Spain LC _COLLATE = ” es_ ES”. We convert “str_2” to the “str_1” string with strxfrm(). You can find the code for this purpose in the following illustration:

Description of the Strcoll() Function in the C Language

This function works similarly to strcmp() with the difference that we can use it to specify which zone configuration rules does the strings should be compared to.

The strcoll() function is defined in the “string.h” header. To use it, we have to include it in our code as follows:

In this example, we compare the “str_2” string with “str_1” string using a specific sort configuration. In this case is Spanish from Argentina, namely “es_ AR”.

For this purpose, we create two strings that contain the same text except that “str_2” has an accent on the fifth letter. The accent is a symbol over a letter used in Spanish, so the glyph for this character is different. Then, we set the locale for Argentina and compare the strings with the strcoll() function. We store the result in the “cn” integer and output it to the command console with printf().

The following is the code for this comparison:

In this Linux Hint article, we briefly explained what character encoding means in Computer Science so that you have a clearer idea of what character encoding means depending on the local configurations used by computer systems. Then, we showed you how to use the two basic features that the C language provides to handle the character collation strings. We hope that this article is useful to you. For more articles about the C language and Linux tips, use the site’s search engine.