We are attempting to develop a very basic Ubuntu script that will enable us to provide the information, whether it’s a filename or perhaps a folder. How can I verify if a folder exists inside a shell script underneath Linux or Unix-like virtual machines? Or how do I see if a file exists? How will a user distinguish if the mentioned path is a directory or a file? So, let’s have some examples in a Bash script to elaborate on this concept. Make sure to log in from your system first. We are utilizing Ubuntu 20.04. After the login, open your console application to get examples done.

For the opening of the shell, try “Ctrl+Alt+T”. Creating a bash file first starting with a simple example of checking if the path mentioned in a bash file is a file or directory. To create a bash code file, type “touch” in the terminal while mentioning the name of a file with the “.sh” extension. So, we have named the file “test.sh”. Hit the key “Enter” to process the query.

You can easily find the just-created bash file within the home directory. To add a bash code to it, we need to open it in some editor. So, we have been utilizing a built-in GNU editor of Ubuntu 20.04. Hence, we have tried the query underneath in a shell and opened it in an editor.

The file has been launched in an editor. Write out the script shown below in it. Firstly, add the bash extension in the file as “#!/bin/bash”. We have declared a new variable “v1” and assigned it a “path” of a file as its value. It is clear from the path that it indicates some bash files. The “if” statement has been initialized. Inside the braces [], we have to use the flag of “-d” representing the directory within its condition part. It will check whether the mentioned variable value is a directory or something else. If the condition meets, it will execute the “then” part and display “$v1 is a directory”. Otherwise, it will be executing the else part of the “if” statement and displaying “$v1 is a file” at the shell terminal. The “fi” states that the “if” statement has been ended here. After saving this bash code, we will be back to the console via “Ctrl+S” and “Ctrl+X” consecutively.

Now the time is to execute the bash file “test.sh”. Therefore, we have used the bash instruction in our console with the file’s name to check out the output. The output for this instruction shows that the path mentioned in the file is specifying a file. Hence, we can say that the “else” part must have been executed his time.

Let’s see the result for a directory this time. This time, we will see how the flag “-d” works on a variable containing a path for a directory. So, we have opened the file “test.sh” again in the editor via the “nano” query in the shell.

After opening it, we have updated the value of variable “v1” and changed the path to a directory path. We have replaced the file “file.sh” with a directory “Pictures/”. The remaining bash script is the same all over the file in an editor. You have to simply and quickly save the updated bash code and exit the editor using “Ctrl+S” first and then “Ctrl+X” after that.

So, let’s execute our file again. For execution, the same above query has been utilized in the console. This time the execution shows that the mentioned path in the bash script is a directory within the home directory of Ubuntu 20.04.

In the above two examples, you have seen how to use a “-d” flag to see if the mentioned path variable is a directory or not. This time, we will utilize another flag, “-f,” in our example specifying if the mentioned path is a file or not. On the other hand, we will be using a nested “if-else” statement in our bash code to use the “-d” and “-f” flags. We have opened the “test.sh” file in GNU editor via the terminal using the “nano” instruction once more.

After opening the bash document, we have written the below-shown bash script within it. Added the bash extension and initialized a variable v1, containing a file path as its value. Moreover, the nested “if-else” statement has been utilized properly to check whether the path of a variable is a file or a directory. So, within the first, if statement, we have mentioned a condition to check whether the variable value is a directory via the “-d” flag. If the condition meets, it will print “$v is a directory”; otherwise, the other part of a statement will be compiled. Within the “else” part, there is another “if-else” statement mentioned. Within the “if” part of this statement, the condition has been used to check whether the variable path “v” contains a file or not via the “-f” flag. If the path contains a file, it will print that “$v is a file”; otherwise, the “else” part echo statement will compile at the terminal.

After the code has been saved, this is a time to compile the bash script via a bash query. Therefore, we have used the “bash” query with the file name mentioned within it. The output is as same as we have expected. As the variable value contains the path that specifies the file path, it displays that the “$v is a file”.

In the above-illustrated example, we have used the path for a file to see how the nested “if-else” statement reacts while using the flags “-d” and “-f”. This time we will use the directory path. Open the file once again and update the variable path value. We have replaced “test.txt” with “Documents/”. The remaining script is the same.

Upon successfully compiling a bash script, the declared path in variable value “v” is a directory, e.g., Downloads.

The last and bonus example is for extra practice. Open the new file “file.sh” and fill it with the below code. Two variables have been declared to show the file and directory path consecutively. The “if-else” statements have been utilized with the “-d” flag to specify the path type, e.g., directory or file. 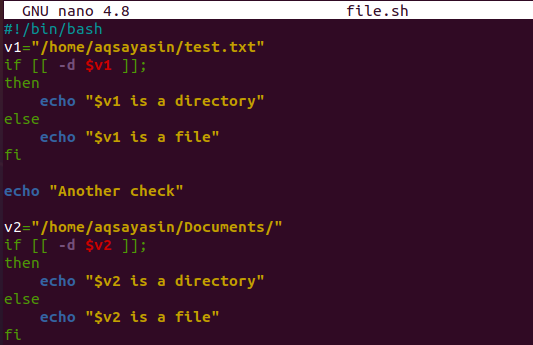 Once the code has been compiled, the first variable contains a file, and the second contains a directory as per the below output.

In this guide, we have seen how to find that the mentioned path is a file, a directory, or something else. We have used “if-else” and nested “if-else” statements while utilizing “-d” and “-f” flags in our examples to elaborate better.