“We all know that a network interface card (NIC) acts as a bridge between a computer system and the network that this system is attached. The NIC has an associated speed which determines the quality of your interaction with the network. Therefore, in this guide, we will try to explore the methods through which we can check the NIC speed in Linux.”

Different Methods of Checking the NIC Speed in Linux

There are different methods of checking the network interface card (NIC) speed on a Linux system that is discussed below:

In the first method, we will be using the “ethtool” utility for checking the NIC speed. However, if this utility is not already installed on your Linux system, then you will have to install it first with the following command:

Once you have this utility installed on your system, you need to check the interface name of the network interface whose speed you wish to find out. For that, you will have to run the command given below:

Now, to check the speed of the specified NIC, we will execute the command shown below:

The speed of our specified NIC is highlighted in the following image: 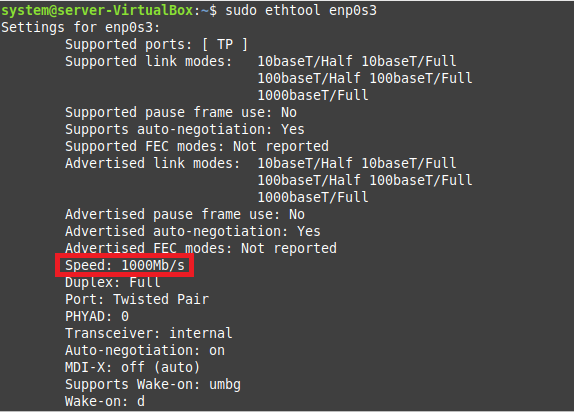 However, you can see that the output of the above-mentioned command is a bit too lengthy. Therefore, if you wish to confine this output to the NIC speed only, then you will have to modify it in the manner shown below:

You can visualize from the following output that now, only the NIC speed appears on the terminal.

Method # 2: Making Use of the “dmesg” Command

In this method, we will use the built-in “dmesg” command in Linux to check the NIC speed as shown below:

The speed of the specified NIC is highlighted in the following image:

Now, we will use the “mii-tool” utility to check the NIC speed in Linux. This utility resides inside the “net-tools” package; therefore, we will install it first with the command shown below:

After installing this package on your system, you will have to run the following command to check the NIC speed:

The speed of the specified NIC of our Linux system is highlighted in the image shown below:

With the help of this useful guide, you can instantly learn three different methods of checking the NIC speed in Linux. After learning these methods, it is entirely a matter of your own choice which method you choose to follow to suffice your need.