Data types are used in RDBMS like MySQL to insert and store the specific data in the database. There are different data types used in MySQL to arrange data like INT, CHAR, VARCHAR, and DATE. In MySQL, tables contain columns; when a column is defined with a particular data type, it does not allow the data of other data types to be inserted in that column. Moreover, the data types classify the data based on the nature of the data and make it easier to manage and computate. In this post, we are going to explain the use and limitation of the CHAR and VARCHAR data types.

What is the CHAR data type in MySQL

To display the table, run the command: 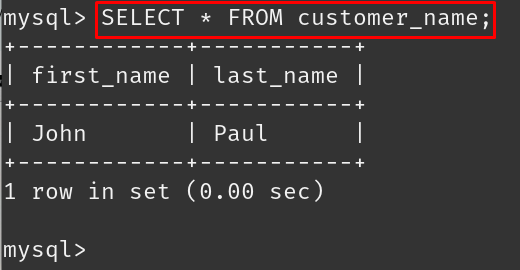 The name has successfully been updated, now we will insert the values which will be beyond the defined range of CHAR which is 5 for first_name and 6 for last_name:

In the above output, we can see that it has generated the error of range, we will create the table once again and assign it with the length of 256, as we told earlier the range of CHAR data type to store data is a maximum of 255, so it will also generate the error:

It generated the error of the maximum length and suggested using BLOB or TEXT instead of CHAR.

What is the VARCHAR data type in MySQL

The VARCHAR is another data type used in MySQL to store the data which is in the form of characters and strings. The length of VARCHAR data type to store data is up to 65535 (in version 5.0.3 and later), so a person can use it to define long strings and characters, moreover, it can store both the characters as well as integers. Let us create a table using the following command:

To insert the values, run the command:

To view the value, execute the command:

The values have been inserted successfully in the table.

Comparison between CHAR and VARCHAR in MySQL

Both are the data types and used to store strings and characters in MySQL but the few differences are: