We will use the three most important functions of the “string.h” header file in the following examples:

The string length function of the “string.h” header file is used to calculate the length of a string. The following C script makes use of this function:

In this program, we declared a “sample” string and assigned the “Programming” string to it. Then, we used the “strlen” function of the “string.h” library to calculate the length of this string and assigned it to the “length” variable. After that, we printed this length on the terminal.

To compile this C program, the following command is used:

To execute this program, the following command is used:

The length of our string is shown in the following image:

The string copy function of the “string.h” library is used to copy one string to another. The following C script is designed to serve this purpose: 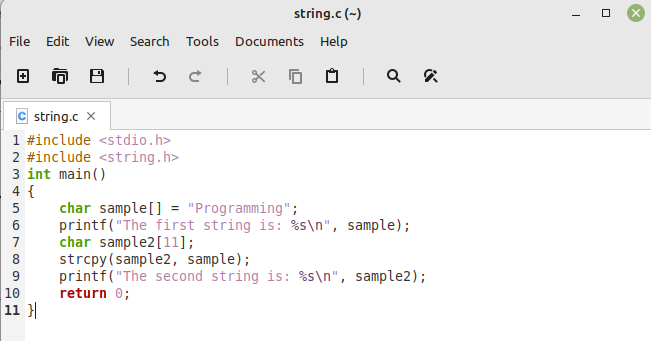 In this example, we used the same string as in the previous example. Apart from that string, we declared another string which is “sample2”. Using the “strcpy” function of the C programming language, we copied the “sample” string to “sample2”. After that, we printed the “sample2” string on the terminal.

The following output depicts that our first string is successfully copied to the second string:

The difference between our two strings is shown in the following image: