The method of arranging data in alphabetical order or in ascending/ descending order. This method is known as the sorting of data. The sorting method makes it easy for us to find the information quickly, which we want. In C# programming, a sorted list means that the elements of the list are arranged in a specific order. Most commonly the alphabets and words are stored in alphabetical order and numbers are stored in ascending or descending order. The sort list is one in which the elements of data are sorted in a specific order. In this article, we will study in detail, the sorting of list elements in C# programming in Ubuntu 20.04.

Example # 1: Sorting the List of Integers by Using the Sort() Method 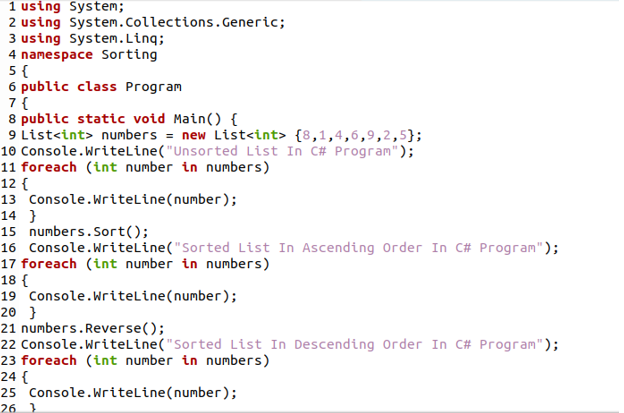 In this example, we import the C# library “using System” for getting the methods and also functions of the C# program. The “using System.Collections.Generic” is imported here that contains interfaces and classes. Also, we import “using System.Linq” to retrieve data. After all this, we are using the namespace “Sorting”. Inside this namespace, we declare a class named “Program” which is public. Now, in this class, we invoked a “main” function which is the main part of the C# program. 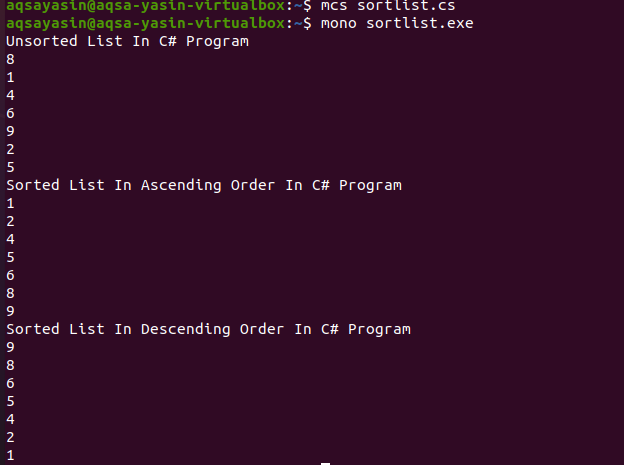 Example # 2: Sorting the List of Strings by Using the Sort() Method

In this example, we are going to sort the string list in alphabetical order using the “Sort()” method and print the unsorted and sorted string list on the terminal. 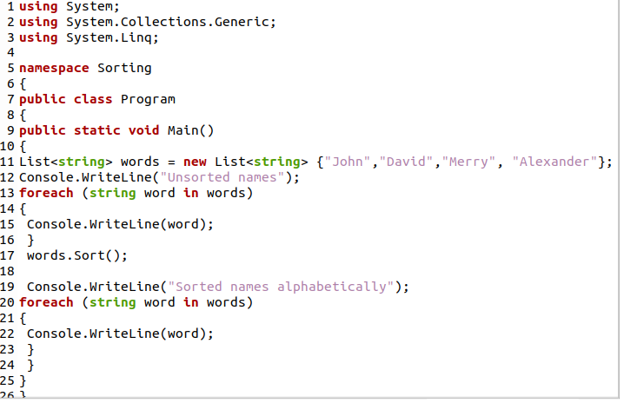 Now, we invoked a “main” method as “public static void Main()”. Inside this “main” function, we have a list of “strings” named “words” and pass some string data which we want to sort to this string list. We display the line “Unsorted names” using “Console.WriteLine” and then for printing these unsorted names we are using the “foreach” loop. This loop will access the words in a string and “Console.WriteLine” prints these unsorted names on the display screen.

We will get the output with the same method, using the same commands as we have discussed in the above code but the filename is different. The output of this code is here for you to better understand this concept.

The output is shown in this image. We see that it prints all the string list data unsorted the first time and then sorts these given names and also prints the sorted names in alphabetical order on the output screen.

Now, look at this example in which the “Sort(IComparer<T>)” method works in the C# program in Ubuntu 20.04. The code is here in the image given below. 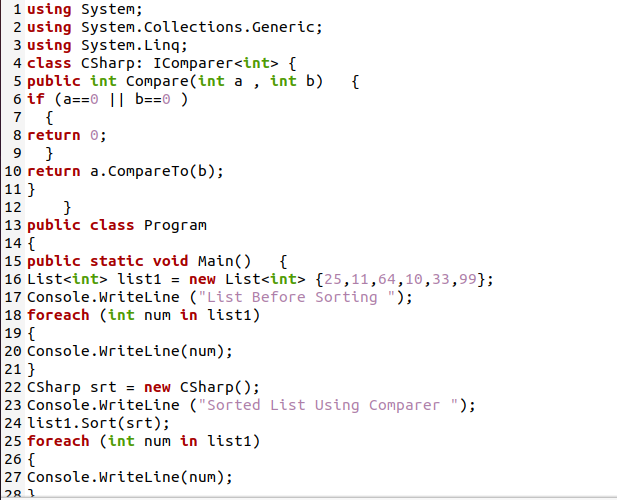 In the code given above, we are using the “using System” library, “using System.Collections.Generic” and the “using System.Linq”. We have explained all these namespaces in our previous examples. After this, we create a class with the name “CSharp” which is inherited from “IComparer<int>”. After this, we have “public int Compare(int a, int b)” in which we declare two integers “a” and “b” with the integer data type. Now, we have “if” statement in which we have a condition “a==0 || b==0”. If this condition is satisfied, then return 0 and if the condition is not satisfied then compare a and b and return the result.

For this, we are using “return a.CompareTo(b)”. Now, we have a public class named “Program” and the “main” method. After invoking this “main” method, we create a “new” list of integers named “list1” and pass integer numbers to that list. Then, in the next line, we print “List Before Sorting” using the “Console.WriteLine”. The “foreach” loop is used to get the integer numbers in “list1” and “Console.Writeline” will render these unsorted integers on the screen, as we discussed in the previous example.

Now in the next line of code, we create an object “srt” of class “CSharp”. After creating an object, we render a line on the output by using “Console.WriteLine”. And then going to sort list1 using “list1.Sort(srt)”. This will sort the integers in ascending order. And again, we use “foreach” loop and “Console.WriteLine” which we discussed many times for displaying the sorted list. The output of this code is here.

Here, we have explained how to sort a list in C# programming in Ubuntu 20.04. We discussed two methods here in this article. We demonstrate different examples for better understating this concept of sorting lists in C# programming. Sorting a list is somehow similar to sorting Array in C# programming. I hope this article will help you a lot in understanding this concept and you will be able to sort the list in the C# program after reading this article. We have explained all the elements of the C# program in detail and also provide code and output for you so that you can easily learn how to sort the list and be able to use them in complex programs of C#.