Mainly, the “for” loop has been designed to iterate several statements within it without actually paying attention to their type. There are situations when your “for” loop doesn’t work due to some problems. At that time, there is the  “foreach” loop in C# for our help which is said to be an alternative for the “for” loop. It is most probably designed to iterate the values of an array or collections within C# and perform different operations according to the statements. So, we have decided to try the “foreach” loop of C# in our article today. Have a new start of this guide by the formation of a new C# file in our system to try making some C# programs.

Before showing the examples of “for each” loop, we will be taking a look at the simple “for” loop first. Thus, the program has been started with the C# “System” main library within the text editor of the Ubuntu 20.04 system. The public class “Test” has been started with the main() function implementation in it. Within the main() method, we are using the simple “for” loop started from iteration 0 and ended at less than 5 i.e., 4. On each iteration, the loop will be performing the “Console.WriteLine()” function to display the string “Hello” with the iteration number “I” on the console screen. The “for” loop, main() method, and class is completed here.

After saving this code, we have tried to compile it with the “mcs” C# compiler in Ubuntu. The compilation was successful as it created an “exe” file for the code. Now, we have to run this “exe” file on the shell with the runtime executor “mono” of C#. On running it, we have got a total of 5 results for the “for” loop execution on each iteration. The string “Hello” along with the iteration number is displayed on our screen.

Now, we will be trying the alternative of the “for” loop i.e., “for each” in the C# program to get the very same type of results as we got with the use of a simple “for” loop. So, we have been using the System library and created a new class “Test” having a main() function within it. The main() function has been started with the string array “A” initialization with the 5 string values. Now, we have been utilizing the “foreach” loop here to iterate the values of an array “A” using the “I” iterator. The “string” keyword is showing that the elements of a string array will be taken from the array and displayed as the element “I”. This loop has been using the Console.WriteLine() function to display the same string “Hello” along with the elements of an array using “I” as iteration value.  The program is now complete and ready for use.

Let’s see how a “foreach” loop works on integer-type arrays. So, within the same code file, we have updated the few code lines as shown. Added an integer array “A” with some integer values in it. The “foreach” loop has been started using the element iterator “I” and used the “Console.Write()” function to display each value from the array. After this loop, we have added a line break using the “\n” in the Console.Write() function statement.

After compilation and execution of this updated code, we have got the integer array values displayed at the same line one after another.

This was quite simple and basic. Let’s perform some simple calculations in the program. So, we have updated the code and declared an integer “z” taking a value of “I” incremented by 2. The Console.WriteLine() function is used to display the element at index “I” and the calculated value of “z” for the particular iteration.

After running this code, we have got each particular value displayed along with the incremented value of “z” at the shell screen. 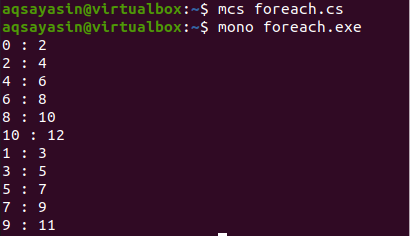 After this code execution, we have got all the elements of the 2-dimensional array displayed at the same line in a 2-dimensional format of arrays.

After this dictionary program code execution, each element from the dictionary has been displayed in key-value format i.e.,  Key 1, value Ana and so on.

After executing this code, we have found the largest value “130” from array “A”.

This tutorial is efficiently describing the use of “loops” in programming and makes a clear comparison between the “for” and “foreach” loops in C# programming. We have discussed different examples of arrays to iterate the values and display them on the console i.e., on a single line and separate lines as well. Trying simple calculations,  the “foreach” loop examples have been demonstrated perfectly for 2-dimensional arrays and dictionaries as well.