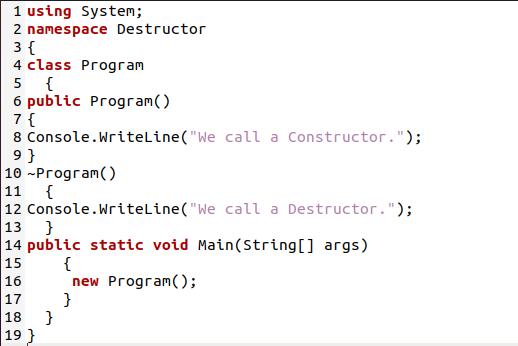 We start our C# program with the “using System” statement. The using statement will allow you to specify many resources in one statement. Here, we have “using System”, which means we use the system library in our code. It will provide all the functions and classes we need in this code. We also have a namespace having the name “Destructor” here. We use the keyword “namespace” for organizing our C# code.

Now, we will explore another example to better understand the C# destructor concept. Look at this example, and how it works: 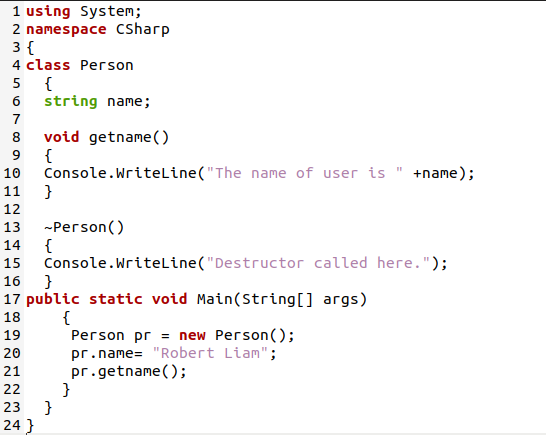 After this, we create a “Console.WriteLine()” statement in this destructor class. Next, we are invoking a method below this destructor class, which is “public static void Main (String [] args)”. We discussed this method in detail in the previous code. Now, move forward to the next line in which we create an object of the “Person” class with the name “pr”. Here, “new” is a keyword used for creating an object. In the next line, we have “pr.name”, the “pr” is the object, and the name is the string type variable that we declare at the start of the program. Next, we use “string name” here. We assign a name to this, which is “Robert Liam”, and we call the “getName()” method with the object of the class “pr”.

The output of our destructor code is here in this image. Look at this output and how it displays data of our code.

You can see this when we enter the name in the string and call the method of “getName()”. It returns the name using the first “Console.WriteLine” statement, which is written inside this “getName()” method. Then, the destructor is called automatically, and it destroys the constructor class instances.

Here, we are exploring another interesting example for you: 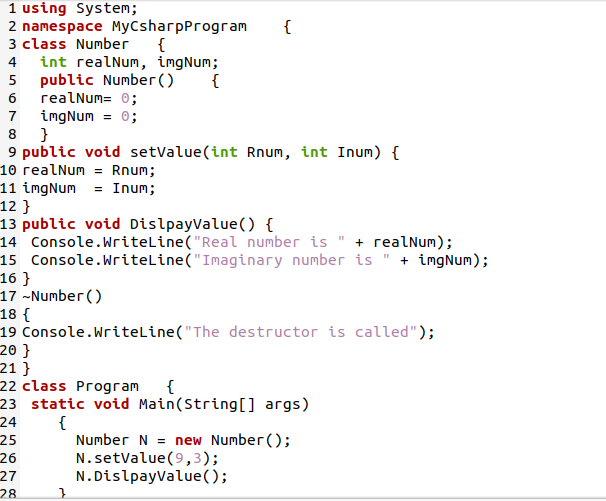 The “namespace” is named “MyCsharpProgram” here, and the class is called “Number”, which is the main class. The elements of this class are private by default. We are declaring “realNum” and “imgNum” in this class which is of the “int” data type. After this, we will define the constructor class with the name “Number()” and initialize these previous integers here.

The “~Number()” is the destructor class here. We also have a “Console.WriteLine()” inside this destructor class. Then, we have a driver class named “Program”. We create a “main” method and then create an object “N” of class “Number” with the help of the “new” keyword. This object “N” invokes the constructor. Then, we call the “setValue()” method and pass values to this method. In the next line, the “DisplayValue()” method is called, which will display the values of “realNum” and “imgNum”.

In this guide, we explore the concept of destructor in C# programming in Ubuntu 20.04. We come to know that the destructor in C# programming is used for the destruction of the instances of the constructor class when we don’t need those instances later. We explain this destructor concept in detail. And also, provide different examples with their output for you so that you try these examples yourself and get the idea about this concept. We explain every line of this C# code in detail for your understanding. We hope you found this article helpful. Check the other Linux Hint articles for more tips and tutorials.