You may have worked on list-type variables in many programming languages to be used in the code. Lists are one of the few data structure variables used to store more than one value at a time. However, have you used the list to initialize some class data members while coding? The initializer lists are those data structures used in programming to initialize some data members of the specific class. If you haven’t done it so far and you are looking for something like this, then this article guide will give you a whole new experience. This article will demonstrate several simple examples to see the function of using initializer lists in C++. One should have a G++ compiler configured on their system if working on the Ubuntu 20.04 system. Begin by launching the “terminal” application found in the Ubuntu system.

Start your first C++ example for the initializer list with the creation of a new C++ document. The even green “touch” word can be used here to generate a file named “initlist.cc”. You can find this file in the home folder by opening the file explorer from the side application bar on Ubuntu 20.04.  GNU Nano editor is here to help and launch the “initlist.cc” file. Your file will be opened in the Editor quickly within the shell:

The standard cout clauses are used after that to display both data member values on the shell using the object “t” to call the functions “geta()” and “getb()” within it. The main function closes here, and the code is ended. Save your code and run it in the shell: 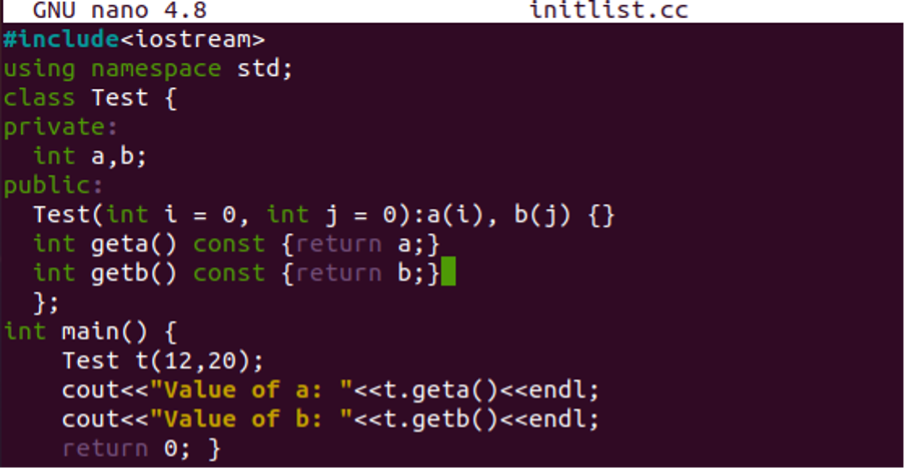 We have compiled the previous code with the G++ compiler package. In execution, we have both the data member values separately on the shell:

Within our second example, we will be using the initializer list for the initialization of some non-static constant type data members in C++ code. After the namespace, the class named “New” has been initialized with a private constant type integer variable “n”. The public type constructor function is used along with the initializer list to initialize a constant data member “n”. A new “get()” function on the integer return type has been used to return the data member “n” value to the main function. The main()function is creating an object n1 of class “New” while passing it a value “13” as an argument.

The constructor will be called, and the initializer list will set the value of data member “n”. The get() function has been called within the cout clause to display the set value of data members in the shell using the object “n1”. The main function and the programs end here:

We use the initializer list to initialize the value for some non-static constant data members in C++. The output for this code has been showing the constant value 13 on the shell: 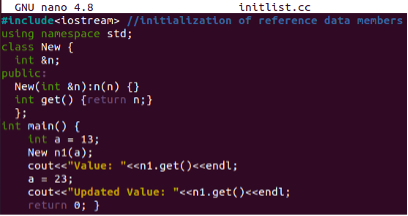 Compile the code first and execute it after that. It outputs the first value of the reference variable and then, the updated one on the shell. This is how the initializer list works for reference data members:

The initializer list can also be used for the object initialization while working in more than one class in C++. So, we have used the Two classes, One and Two, in our newly created code. The first class named ”One” contains the integer variable “val”. It also includes the definition prototype of constructor function “One”, taking some integer value. The class has been closed, and it doesn’t have any default constructor in it. The constructor has been initialized outside of this class “a”, getting the integer type value from the main function directly. This value has been displayed using the cout statement using the variable “val” in it. Another class, “Two”, has been defined with a class “One” object, i.e., “a”. This class also contains the definition prototype of the constructor. 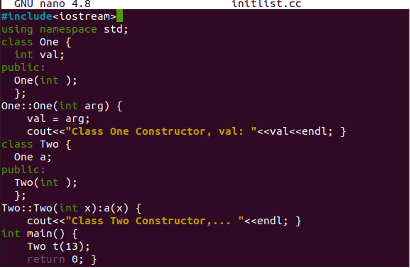 In return, we have got the following result. It outputs the variable “val” value on the shell along with the statement that it’s been running in the class “One” or “Two” constructor.